Do You Own Your Own Fingerprints? These days, many of us regularly feed pieces of ourselves into machines for convenience and security. 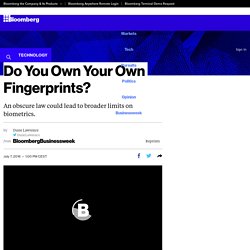 Our fingerprints unlock our smartphones, and companies are experimenting with more novel biometric markers—voice, heartbeat, grip—as ID for banking and other transactions. But there are almost no laws in place to control how companies use such information. Nor is it clear what rights people have to protect scans of their retinas or the contours of their face from cataloging by the private sector. There’s one place where people seeking privacy protections can turn: the courts. A series of plaintiffs are suing tech giants, including Facebook and Google, under a little-used Illinois law. Information Collected by Al Macintyre.

Risks. The Risks Digest Volume 29: Issue 63. Forum on Risks to the Public in Computers and Related Systems ACM Committee on Computers and Public Policy, Peter G. 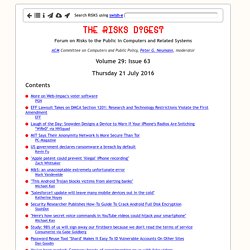 Your phone’s biggest vulnerability is your fingerprint - The Verge. 3D Fingerprint Technology: A New Tool In The Arsenal of Law Enforcement - 3D Printing. Police asked this 3D printing lab to recreate a dead man’s fingers to unlock his phone. Last month, law enforcement officers showed up at the lab of Anil Jain, a professor at Michigan State University. 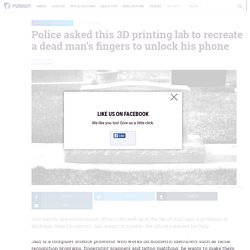 Jain wasn’t in trouble; the officers wanted his help. Jain is a computer science professor who works on biometric identifiers such as facial recognition programs, fingerprint scanners and tattoo matching; he wants to make them as difficult to hack as possible. But the police were interested in the opposite of this: they wanted his help to unlock a dead man’s phone. Jain and his PhD student Sunpreet Arora couldn’t share details of the case with me, since it’s an ongoing investigation, but the gist is this: a man was murdered, and the police think there might be clues to who murdered him stored in his phone. But they can’t get access to the phone without his fingerprint or passcode. Arora described how this works to me. “We don’t know which finger the suspect used,” he told me by phone. 3D printing of a dead man’s fingers allows unlocking his phoneSecurity Affairs. Do you remember the battle Apple vs FBI conducted to force the IT giant on unlocking the San Bernardino Shooter’s iPhone, well it has become a story of the past. 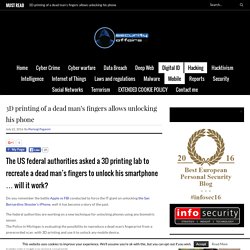 The federal authorities are working on a new technique for unlocking phones using any biometric sensor. Police Unlock Dead Man's Phone by 3D-Printing his Fingerprint. Police Want To 3D Print A Dead Man's Fingers To Unlock His Phone. Asking Apple to help break into an iPhone is so three months ago. 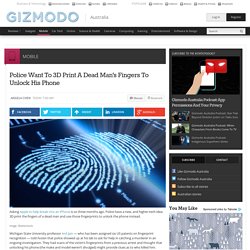 Police have a new, and higher-tech idea: 3D print the fingers of a dead man and use those fingerprints to unlock the phone instead.Image: Shutterstock Michigan State University professor Anil Jain — who has been assigned six US patents on fingerprint recognition — told Fusion that police showed up at his lab to ask for help in catching a murderer in an ongoing investigation. They had scans of the victim’s fingerprints from a previous arrest and thought that unlocking his phone (the make and model weren’t divulged) might provide clues as to who killed him. Jain and his PhD student Sunpreet Arora have already printed all 10 digits using the scans and coated them in a layer of metallic particles to mimic how conducive skin is and make it easier to read. Police 3D print murder victim's finger to unlock his phone. Police unlock iPhone, printed on 3D-printer model of a finger of the murdered.

Police in the US have found a new way of unlocking smartphones of suspects. 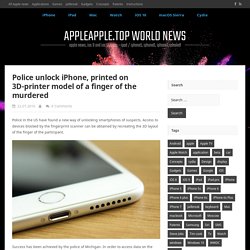 Access to devices blocked by the fingerprint scanner can be obtained by recreating the 3D layout of the finger of the participant. Success has been achieved by the police of Michigan. In order to access data on the iPhone who died at the hands of the killer of a resident of the state, law enforcement officers asked Professor Anil Jain from Michigan state University. Police 3D-print a dead man's fingers to unlock his phone. Michigan police have used a 3D model of a murder victim's finger to unlock a phone, according to a new report. 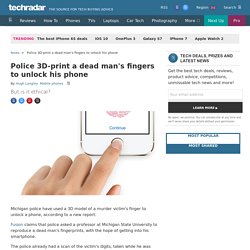 Fusion claims that police asked a professor at Michigan State University to reproduce a dead man's fingerprints, with the hope of getting into his smartphone. The police already had a scan of the victim's digits, taken while he was alive, which they handed over to the lab to create the 3D model. There aren't a lot of details - the investigation is ongoing - but the lab is reportedly making ten fingers, one for each print, and covering each with a "thin layer of metallic particles" so the scanner will read it as if it were a finger and not 3D-printed plastic. The truth is (maybe) in there. Police get dead man's finger 3D-printed to unlock his phone.

Police 3D-printed a murder victim's finger to unlock his phone. Police in Michigan have a new tool for unlocking phones: 3D printing. 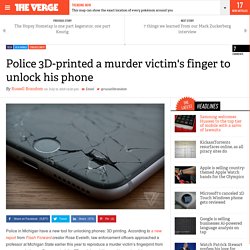 According to a new report from Flash Forward creator Rose Eveleth, law enforcement officers approached a professor at Michigan State earlier this year to reproduce a murder victim’s fingerprint from a prerecorded scan. Once created, the 3D model would be used to create a false fingerprint, which could be used to unlock the phone. Because the investigation is ongoing, details are limited, and it’s unclear whether the technique will be successful. Still, it’s similar to techniques researchers have used in the past to re-create working fingerprint molds from scanned images, often in coordination with law enforcement.

This may be the first confirmed case of police using the technique to unlock a phone in an active investigation. Police techniques for unlocking phones have drawn close scrutiny since the San Bernardino case earlier this year, although the phone involved did not have a fingerprint reader.