How to Flex Your Rights During Police Encounters 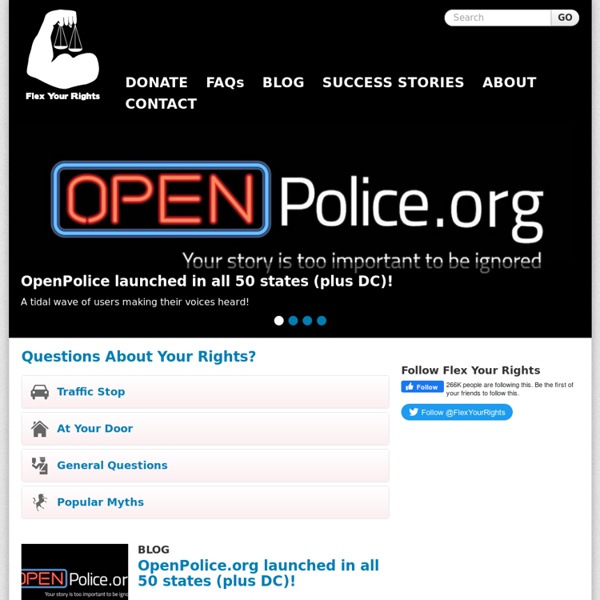 Related:  Getting along with the Police

Drug War Clock | DrugSense Researchers examining the effectiveness of ONDCP's anti-drug media campaign reported: "The NSPY [National Survey of Parents and Youth] did not find significant reductions in marijuana use either leading up to or after the Marijuana campaign for youth 12 to 18 years old between 2002 and 2003. Indeed there was evidence for an increase in past month and past year use among the target audience of 14- to 16-year-olds, although it appears that the increase was already in place in the last half of 2002, before the launch of the Marijuana Initiative. It will be worthwhile to track whether the nonsignificant decline from the second half of 2002 through the first half of 2003 is the beginning of a true trend. 40 websites that will make you cleverer right now The indexed web contains an incredible 14 billion pages. But only a tiny fraction help you improve your brain power. Here are 40 of the best. whizzpast.com – Learn about our awe inspiring past all in one wonderful place. khanacademy.org – Watch thousands of micro-lectures on topics ranging from history and medicine to chemistry and computer science. freerice.com – Help end world hunger by correctly answering multiple-choice quizzes on a wide variety of subjects. artofmanliness.com – Blog/site dedicated to all things manly, great for learning life skills and good insights. unplugthetv.com – Randomly selects an educational video for you to watch. coursera.org – An educational site that works with universities to get their courses on the Internet, free for you to use. mentalfloss.com – Interesting articles guaranteed to make you smile and get you thinking. feelgoodwardrobe.com – Find out how the world of fashion really works and what you can do to combat it. lifehacker.com – Learn to hack life!

Police So Out of Control, this Judge Explains How and Why You should Always Flex Your Rights FlexYourRights.org Washington, D.C. – A sitting judge, Justice Janice Rogers Brown, has advised citizens on how to deal with police attempting to engage in “fishing expeditions.” Brown urges citizens to address officers “firmly, politely, (and) respectfully,” and to exercise their right to end “voluntary” encounters with police by stating: On Tuesday, Brown, as part of a three-judge panel in the U.S. Court of Appeals for the D.C. While agreeing that those encounters are legitimate, Brown expressed displeasure with the situation by writing a separate concurring opinion. “Our jurisprudence perpetuates a fiction of voluntary consent where none exists,” Brown wrote. The honesty from a sitting judge was refreshing, yet startling, as Brown wrote: With the guise of voluntary consent stripped away, the reality of the District’s regime is revealed. Brown says if an officer states a person can’t leave, “then coercion will cease to masquerade as consent. According to the National Law Journal:

10 Big Myths about copyright explained See EFF notes on fair use and links from it for a detailed answer, but bear the following in mind: The "fair use" exemption to (U.S.) copyright law was created to allow things such as commentary, parody, news reporting, research and education about copyrighted works without the permission of the author. That's vital so that copyright law doesn't block your freedom to express your own works -- only the ability to appropriate other people's. Intent, and damage to the commercial value of the work are important considerations. Fair use is generally a short excerpt and almost always attributed. Note that most inclusion of text in followups and replies is for commentary, and it doesn't damage the commercial value of the original posting (if it has any) and as such it is almost surely fair use. The "fair use" concept varies from country to country, and has different names (such as "fair dealing" in Canada) and other limitations outside the USA. See the DMCA alert for recent changes in the law.

25 Facebook Tips and Tricks you should be aware of 1. Hide Your Online Status From Selected Friends: So you want to use Facebook chat but don’t want some people to see your online status? Simply open up the Facebook Chat and click on Friends List. Start creating a new list called BlockList. Once the list is created, add those friends to the list that you want to appear offline to. 2. If you are like me, you often get annoyed by the dozens of silly applications that people have added to their profile. 3. Want to display your Facebook status updates on your WordPress blog? 4. No need to go to Facebook.com if all you want to do is use Facebook chat. 5. If you are a firefox addict you don’t need to use any other software to update your Facebook status. 6. Easily create a photo collage from profile pictures of all your Facebook friends using a simple Facebook app called Photo Collage. 7. A great tutorial by Tim Watson walks you through the process of hiding specific actions from your status updates. 8. 9. 10. 11. 12. 13. 14. 15. 16. 17. 18.

What are my rights at various "checkpoints"? | Flex Your Rights There are four general types of checkpoints you might encounter: DUI checkpoints, US border checkpoints, drug checkpoints, and TSA checkpoints. In a legal sense, they are not all created equal. So depending on which one you encounter, you’ll want to be prepared to flex your rights appropriately. DUI Checkpoints Sobriety checkpoints — also known as DUI checkpoints — are the most common roadblocks you might encounter. They function as a general purpose investigatory tactic where police can get a close look at passing motorists by detaining them briefly. Remember that your constitutional rights still apply in a roadblock situation. Since the Supreme Court’s ruling in Illinois v. Also keep in mind that police closely monitor cars approaching the roadblock. Sobriety checkpoints are generally permitted by the courts, but only if conducted properly. US Border Checkpoints CBP may generally stop and search the property of anyone entering or exiting the U.S. Checkpoints Near the Border

UVB-76 Live Stream Blog Oatmeal Swirlers! Give it a swirl! 12/11/2006, by Matt of X-Entertainment. Things changed as we skipped into the '90s, not the least of which being a remarkable incline of totally whacked out kiddy food. We previously lived in a world where popcorn was just popcorn...and then along came Pop Qwiz to teach us that popcorn could be electric red and neon blue. Whereas I was once forced to exist never once ingesting a Hostess pudding pie because I hated Hostess pudding pies...in marched the Ninja Turtles with a decision-swaying wagon full of green food coloring and franchise branding. In today's world, such efforts are so commonplace that they're far less admired. A little over fifteen years ago, giving food wacky abilities and strange colors was enough to get us to celebrate even the most unremarkable offerings. Now, I'm no regular oatmeal eater, not by a long shot, but I credit General Mills' Oatmeal Swirlers as the sole reason that I'm able to eat it at all. Maybe I protest too much. "Please, bring Oatmeal Swirlers back.

Dear America: Shoot bad cop videos horizontal — and ‘respect the aspect ratio of the ass-whooping’ “Nightly Show” contributor Mike Yard taught a brief seminar on how to shoot a proper video of a black man getting beaten – or worse – by police officers. The comedian said his seminar, Police Brutality Video Production 101, would provide “helpful tips for when you know that sh*t is about to go down.” “What’s a bigger tragedy: a black man getting kicked to death by the police, or shooting it vertically?” Yard asked. “Definitely the black man getting kicked to death – however, we can’t do sh*t about that. But what we can do is respect the aspect ratio of the ass-whooping by turning our phone from (vertical) to (horizontal) for maximizing the 16:9 frame.” He showed a video of a police officer roughing up a black man lying on the ground, and said the crime might not be prosecuted because the video was shot vertically – with two black fields on either side of the image taking up most of the screen.

Related:
Related:  Getting along with the Police