Matthew Harwood, One Nation Under SWAT. RESTORE HONOR: Grow a Spine…and Some Hair. “You only have power over people so long as you don’t take everything away from them. 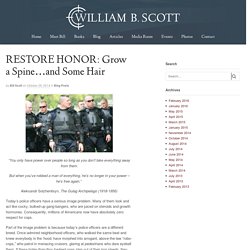 But when you’ve robbed a man of everything, he’s no longer in your power – he’s free again.” Aleksandr Solzhenitsyn, The Gulag Archipelago (1918-1956) Today’s police officers have a serious image problem. No Longer a Conspiracy Theory, First State Legalizes Weaponized Drones for Cops. North Dakota — Nothing says “police state” quite like unmanned aerial vehicles patrolling the sky ready to deploy 80,000 volts to the nearest protester or dose entire crowds with chemical weapons. 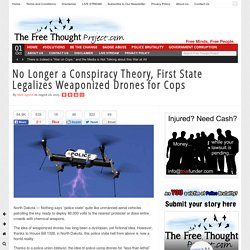 The idea of weaponized drones has long been a dystopian, yet fictional idea. However, thanks to House Bill 1328, in North Dakota, this police state hell from above is now a horrid reality. Thanks to a police union lobbyist, the idea of police using drones for “less than lethal” weapons is now written into North Dakota law. A Stability Police Force for the United States. A Stability Police Force for the United States. Video: Veteran Pulled Over by Camo-Wearing Cops In Armored Vehicle. “I didn’t know we were in Iraq” Paul Joseph Watson Prison Planet.com April 13, 2015 A video out of Gainesville, Florida shows a man being pulled over by camoflague-wearing cops driving an armored vehicle, a disturbing reminder that law enforcement in America is becoming increasingly militarized. 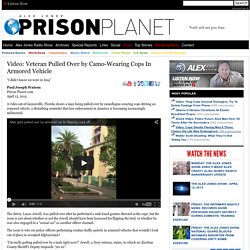 The driver, Lucas Jewell, was pulled over after he performed a rude hand gesture directed at the cops, but the issue is not about whether or not the Jewell should have been harassed for flipping the bird, or whether he was also engaged in a “sexual act” as another officer claimed. The issue is why are police officers performing routine traffic patrols in armored vehicles that wouldn’t look out of place in occupied Afghanistan? Psyop Counteroffensive Begins As Army Training Questioned.

Paramilitary police: Cops or soldiers? FROM the way police entered the house—helmeted and masked, guns drawn and shields in front, knocking down the door with a battering ram and rushing inside—you might think they were raiding a den of armed criminals. 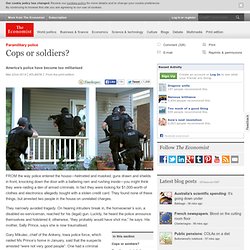 In fact they were looking for $1,000-worth of clothes and electronics allegedly bought with a stolen credit card. NYPD Unit Equates Protests with Terrorism: "The message is clear: civil disobedience is an attack on New York City itself" In the wake of the Paris terror attacks abroad, and the protests over Eric Garner’s death by chokehold, the NYPD is reformulating its policing strategy, and creating a new unit, dubbed the Strategic Response Group, to deal with “special events” including both terrorism and protests. 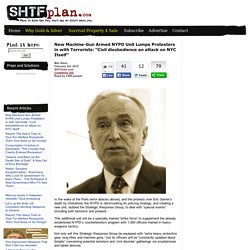 This additional unit will be a specially trained “strike force” to supplement the already established NYPD’s counterterorism program with 1,000 officers trained in heavy weapons tactics. Not only will this Strategic Response Group be equipped with “extra heavy protective gear, long rifles and machine guns,” but its officers will be “constantly updated about threats” concerning potential terrorism and ‘civil disorder’ gatherings via smartphones and tablet devices. Tech Dirt highlighted Police Commissioner Bill Bratton’s conspicuous plan to handle civil disobedience, protests and terrorism as a unified threat under one special unit: MassPrivateI: 13 states refuse to disclose how many tanks, assault weapons etc., they've gotten from the 1033 program. Call of Duty Director Says U.S. Should Station Soldiers in Schools. Dave Anthony, former writer and director for the megahit video game franchise Call of Duty, wants the U.S. government to explore stationing soldiers in schools. 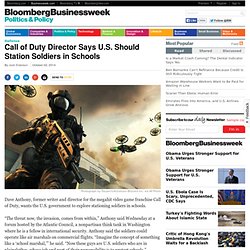 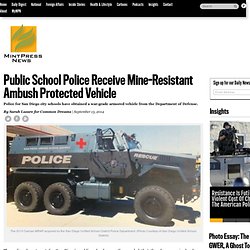 The $700,000 mine-resistant ambush protected vehicle (MRAP), which is designed to withstand blasts from improvised explosive devices and mines, was given to law enforcement for the Unified School District in April. The vehicle was transferred through the Department of Defense’s controversial 1033 program, which authorizes the military to donate what it considers surplus military equipment to police and sheriff departments in the United States, including tanks and weapons used in the occupation of Iraq and Afghanistan. This and other federal programs that flood local law enforcement with weapons of war have fallen under increased scrutiny following the crackdown by heavily armed riot police and military service members on protesters in Ferguson, Missouri opposing the police killing of unarmed African-American teenager Michael Brown. 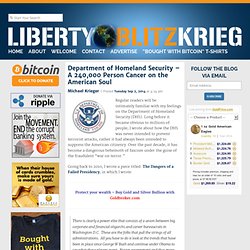 Long before it became obvious to millions of people, I wrote about how the DHS was never intended to prevent terrorist attacks, rather it had always been intended to suppress the American citizenry. Over the past decade, it has become a dangerous behemoth of fascism under the guise of the fraudulent “war on terror.” Going back to 2010, I wrote a piece titled: The Dangers of a Failed Presidency, in which I wrote: Protect your wealth – Buy Gold and Silver Bullion with Goldbroker.com There is clearly a power elite that consists of a union between big corporate and financial oligarchs and career bureaucrats in Washington D.C. War Gear Flows to Police Departments. Photo NEENAH, Wis. — Inside the municipal garage of this small lakefront city, parked next to the hefty orange snowplow, sits an even larger truck, this one painted in desert khaki. 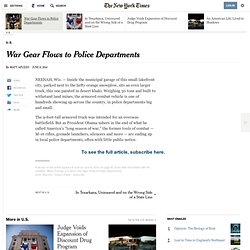 Weighing 30 tons and built to withstand land mines, the armored combat vehicle is one of hundreds showing up across the country, in police departments big and small. The 9-foot-tall armored truck was intended for an overseas battlefield. But as President Obama ushers in the end of what he called America’s “long season of war,” the former tools of combat — M-16 rifles, grenade launchers, silencers and more — are ending up in local police departments, often with little public notice. During the Obama administration, according to Pentagon data, police departments have received tens of thousands of machine guns; nearly 200,000 ammunition magazines; thousands of pieces of camouflage and night-vision equipment; and hundreds of silencers, armored cars and aircraft.

Police Militarization Is Out of Control, and There's No Oversight. From Boston to Ferguson: Have We Reached a Tipping Point in the Police State? “I thought I was losing my capacity to be shocked — but events in Missouri over just the last couple of hours have crossed a frightening line, one that makes me pray that this assault on fundamental American values is just the aberration of one rudderless Heartland community, and not the first symptoms of nation gone mad with high-tech weaponry to keep its own citizens in line.” 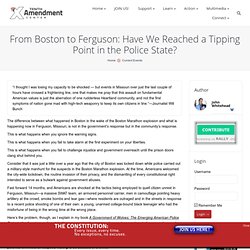 —Journalist Will Bunch. Turning America Into a War Zone, Where ‘We the People’ Are the Enemy. “If you don’t want to get shot, tased, pepper-sprayed, struck with a baton or thrown to the ground, just do what I tell you. Don’t argue with me, don’t call me names, don’t tell me that I can’t stop you, don’t say I’m a racist pig, don’t threaten that you’ll sue me and take away my badge. Don’t scream at me that you pay my salary, and don’t even think of aggressively walking towards me. Most field stops are complete in minutes.

Two Months Ago, Congress Had a Chance to Help Prevent the Escalating Militarization of Police. As protesters around the country march in solidarity with the people of Ferguson, Missouri, politicians and the media are suddenly railing against the long-developing militarization of the American police force. But a revealing vote this past June shows just how uphill the battle is to stop the trend of turning police into soldiers. On June 19, progressive House Democrat Alan Grayson (FL) offered an amendment to the defense appropriations bill that would block the “transfer” of “aircraft (including unmanned aerial vehicles), armored vehicles, grenade launchers, silencers, toxicological agents, launch vehicles, guided missiles, ballistic missiles” from the Department of Defense to state and local police forces.

The amendment attracted the support of only 62 members, while 355 voted against it (14 didn’t vote). Included among those voting against it was Rep. Ten Truths About the American Police State. “The most dangerous man, to any government, is the man who is able to think things out for himself…Almost inevitably, he comes to the conclusion that the government he lives under is dishonest, insane, and intolerable.” -H.L. Mencken, American journalist It’s vogue, trendy and appropriate to look to dystopian literature as a harbinger of what we’re experiencing at the hands of the government. Certainly, George Orwell’s 1984 and Animal Farm have much to say about government tyranny, corruption, and control, as does Aldous Huxley’s Brave New World and Philip K. » Feds React to Militarized Cops in Ferguson Alex Jones' Infowars: There's a war on for your mind! Militarized Homeland Security Invasion of Town Was Over Downloading of Indecent Images.

Overkill? Huge show of force all to catch one bad guy with a laptop Paul Joseph Watson Prison Planet.com July 15, 2014. 10 Facts About The SWATification Of America That Everyone Should Know. Michael SnyderAmerican Dream June 26, 2014. US police departments are increasingly militarised, finds report. Spoils of war: Police getting leftover Iraq trucks. Do police need 18-ton armored vehicles built to withstand roadside bombs in Iraq? Whether they do or not, the Defense Department is giving them away. QUEENSBURY, N.Y. — Coming soon to your local sheriff: 18-ton, armor-protected military fighting vehicles with gun turrets and bulletproof glass that were once the U.S. answer to roadside bombs during the Iraq war.

Police Now “Armed For War” Against Returning Veterans. Cops in armored vehicle asked by residents “Are you coming to take our guns away?” Rogue Government Prepares For Heated Conflict, Historical Cycles Point to Coming Clash. Homeland Security: Preparing for Massive Civil War. "We're building a domestic army" -Marine Corps Colonel speaks out. We are Preparing for Massive Civil War, Says DHS Informant. “A Good Time Was Had By All” – The Obamas Dance the Night Away as Ferguson, Missouri Burns. Congressman Hank Johnson of Georgia Will Introduce Bill to Stop the Militarization of Police. As I pointed out yesterday in my detailed thoughts on Ferguson, President Obama has once again proved his irrelevance and uselessness by failing to say anything meaningful on the disturbing events of the past week.

Document: Army Preparing to Use Lethal Force Against “Unarmed Civilians” During “Full Scale Riots” in U.S. Training manual outlines “sniper response” during crowd control operations Paul Joseph Watson Prison Planet.com August 18, 2014 A document released by the U.S. Army details preparations for “full scale riots” within the United States during which troops may be forced to engage in a “lethal response” to deal with unruly crowds of demonstrators.