Next Steps Along Human Making Us More Betterer 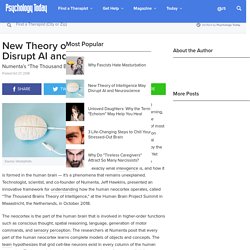 The architecture of most deep learning models is based on layers of processing– an artificial neural network that is inspired by the neurons of the biological brain. Elon Musk's Neuralink Venture Seen As Targeting Human-Computer Link. Elon Musk has started a new company called Neuralink, in what's widely seen as a bid to add a symbiotic computer layer to the human brain. 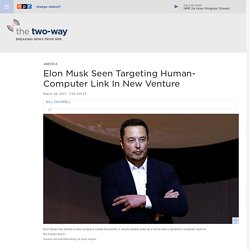 Susana Gonzalez/Bloomberg via Getty Images hide caption toggle caption Susana Gonzalez/Bloomberg via Getty Images Elon Musk has started a new company called Neuralink, in what's widely seen as a bid to add a symbiotic computer layer to the human brain. In the past, entrepreneur Elon Musk has described a "neural lace" that could add a symbiotic digital layer to the human brain.

Musk, whose name is also tied to ambitious projects in space and electric cars, confirmed the new venture early Tuesday, after it was first reported by The Wall Street Journal. Mitochondrial replacement techniques and Mexico. Bionic Lens Will Give You Superhuman Vision (3 x 20/20) Theconversation. Just listen: what is the sound that you can identify as being physically furthest away from where you are? 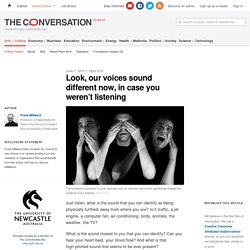 Is it traffic, a jet engine, a computer fan, air conditioning, birds, animals, the weather, the TV? What is the sound closest to you that you can identify? Can you hear your heart beat, your blood flow? And what is that high-pitched sound that seems to be ever present? LET美人 2 9회 출산 후 변한 가슴으로 고통 받는 절벽 가슴 엄마 VS 가슴 4개 달린 엄마. Cyberith's Virtualizer brings running, jumping ... and sitting to virtual reality. In recent years, we've seen a number of virtual reality (VR) devices targeted at bringing more immersive gaming to the home while also adding locomotion to the mix. 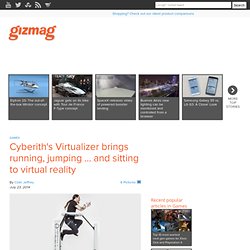 The Not-So-Distant Future When We Can All Upgrade Our Brains - Alexis C. Madrigal. The analysts at the Institute for the Future present new research about our weird times. 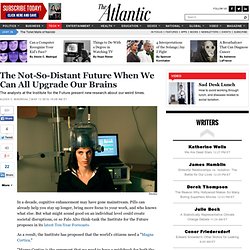 Reuters In a decade, cognitive enhancement may have gone mainstream. Pills can already help you stay up longer, bring more focus to your work, and who knows what else. The Future of Brain Implants. Why Are We Making Robots When We Could Be Breeding Super People? The thing about magick that’s difficult to explain to the uninitiated is that you absolutely have to do it to understand it entirely. 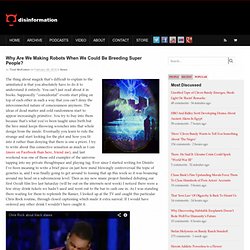 You can’t just read about it in books. Supposedly “coincidental” events start piling on top of each other in such a way that you can’t deny the interconnected nature of consciousness anymore. The ideas of dead matter and cold randomness start to appear increasingly primitive. Powerful artificial muscles made from ... fishing line? Artificial muscles could find use in a wide range of applications, including prosthetic limbs, robotics, exoskeletons, or pretty much any situation in which hydraulics or electric motors just aren't a practical means of moving objects. 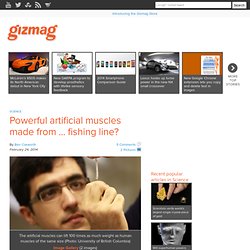 Scientists have been working on such muscles for a number of years, using materials like vanadium dioxide, graphene, carbon nanotubes and dielectric elastomers. Now, however, some of those same scientists have discovered that very powerful artificial muscles can be made from much more down-to-earth materials – regular polymer fishing line, and metal-coated nylon sewing thread. The research was led by The University of Texas at Dallas, but involved the input of partnering universities in Australia, South Korea, Canada, Turkey and China. This Guy Wants to Help You Download Your Brain.

Image via Ever wanted to download a copy of your own brain? 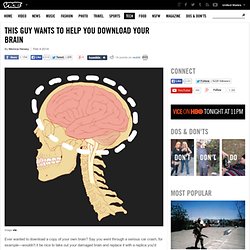 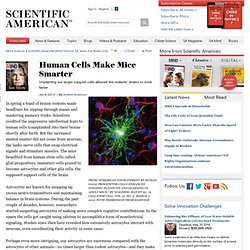 Scientists credited the impressive intellectual feats to human cells transplanted into their brains shortly after birth. But the increased mental muster did not come from neurons, the lanky nerve cells that swap electrical signals and stimulate muscles. The mice benefited from human stem cells called glial progenitors, immature cells poised to become astrocytes and other glia cells, the supposed support cells of the brain. Astrocytes are known for mopping up excess neuro-transmitters and maintaining balance in brain systems. During the past couple of decades, however, researchers started suspecting astrocytes of making more complex cognitive contributions. SEE: Visionary pair imagines how humans will look in 100,000 years. Nickolay Lamm/MyVoucherCodes.co.uk Large green eyes suggest that human vision might be more cat-like. 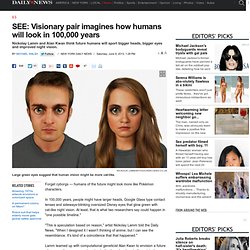 Forget cyborgs — humans of the future might look more like Pokémon characters. In 100,000 years, people might have larger heads, Google Glass type contact lenses and sideways-blinking oversized Disney eyes that glow green with cat-like night vision. At least, that is what two researchers say could happen in "one possible timeline. " "This is speculation based on reason," artist Nickolay Lamm told the Daily News. Superman 2.0: How human-enhancement technologies are giving us all superpowers. Photo by Joe Klamar/AFP/Getty Images. Plant/Human Symbiosis and the Fall of Humanity: Interview With Tony Wright. “I believe that the lost secret of human emergence..the undefined catalyst that took a very bright monkey and turned that species into a self-reflecting dreamer..that catalyst has to be sought in these alkaloids in the food chain that were catalyzing higher states of intellectual activity.” — Terence McKenna Tony Wright and Graham Gynn are authors of Left In The Dark- the book that presents Tony’s research outlining a radical re-interpretation of the current data regarding human evolution and, they contend, our recent degenerated state we call “civilization”.

You can read the book for free here. Juan Enriquez shares mindboggling science.