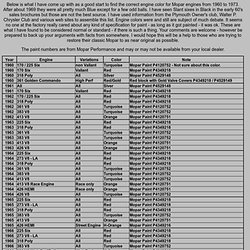 After about 1969 they were all pretty much Blue except for a few odd balls. I have seen Slant sixes in Black in the early 60's sales brochures but those are not the best source. I have used information from the Plymouth Owner's club, Walter P. Chrysler Club and various web sites to assemble this list. Engine colors were and still are subject of much debate. The paint numbers are from Mopar Performance and may or may not be available from your local dealer. ****Note: I have had much discussion about the years of 1970 and 1971 the RB and B engines - two club publications say blue (Judged sheets etc.) and it appears that official Chrysler (below) says turquoise was correct. Performance Parts Book - page 206. Nick's Garage - Air Cleaner Identification. Identifying Air Cleaners for High Performance Mopars Click on images for larger views. 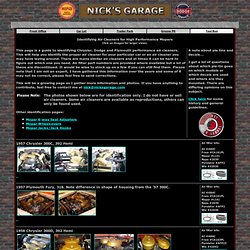 Here is some information on Pie Tins. This is based on observations and discussions with other people. None of it is written in stone and as with a lot of things the factory did, there are variations. Most of the information pertains to performance engines, those with 4-barrel carburetors and Hemis. The label issue is a more complicated and somewhat controversial one.

"Pie Tins" are the aluminum discs that fit on top of the round air cleaners and denote the engine in the car. Pie Tins on performance cars started in 1967 with the Belvedere GTX and Coronet R/T, and possibly the Charger, equipped with the 440 engine. In general, Plymouth cars used "Commando" on Barracuda and non-performance models and "Super Commando" on performance models except the Road Runner which used "383 Road Runner". Chrysler and Imperial also used pie tins. If you have information to add or correct, please let me know. Plymouth Fury State Patrol Car - 1978 - Pictures 07IRI081805969. Anytown, U.S.A.PortfolioPosted: 28 Sep 2007 Exterior Color: redInterior Color: goldEngine: 8Transmission: autoMiles Driven: 65382 1978 Plymouth Fury Minnesota State Patrol Governor's Service Car Up for auction is my 1978 Minnesota State Patrol Plymouth Fury that served on The State Governor's Service Fleet in 1978-1979. 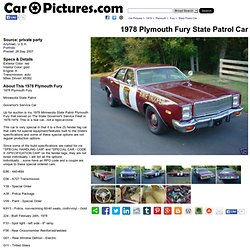 This car is very special in that it is a five (5) fender tag car that calls for special equipment/features built to the State's specifications and some of these special options are not regular production options. Since some of the build specifications are called for via "SPECIAL HANDLING CAR" and "SPECIAL CAR - CODE 9 -SPECIFICATION CAR" on the fender tags, they are not listed individually. Plymouth Fury State Patrol Car - 1978 - Pictures 07IRI081805969.

1976 Mopar 440 Engine Specs. Car Lust: 1976 Plymouth Gran Fury 440. For those who habitually look at the pictures before reading the text (if they read this drivel at all), I promise, I can explain. 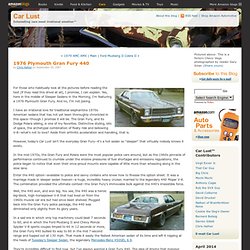 Yes, here in the middle of Sleeper Sedans in the Morning, I'm featuring a 1976 Plymouth Gran Fury. And no, I'm not joking. I have an irrational love for traditional elephantine 1970s American sedans that has not yet been thoroughly chronicled in this space--though I promise it will be. The Gran Fury, and its Dodge Polara sibling, is one of my favorites. Distinctive styling, lots of space, the archetypal combination of floaty ride and bellowing V-8--what's not to love? However, today's Car Lust isn't the everyday Gran Fury--it's a hot sedan so "sleeper" that virtually nobody knows it exists. Enter the 440 option--available to police and savvy civilians who knew how to finesse the option sheet.

Well, the 440 won, and won big. They're incredibly difficult to find now, but I've always wanted a Gran Fury 440. --Chris H. Chrysler B engine. Chrysler's B and RB engines are a series of big-block V8s which in 1958 replaced the first-generation Hemi engines. 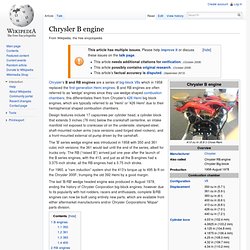 B and RB engines are often referred to as 'wedge' engines since they use wedge-shaped combustion chambers; this differentiates them from Chrysler's 426 Hemi big block engines, which are typically referred to as 'Hemi' or '426 Hemi' due to their hemispherical shaped combustion chambers. Design features include 17 capscrews per cylinder head, a cylinder block that extends 3 inches (76 mm) below the crankshaft centerline, an intake manifold not exposed to crankcase oil on the underside, stamped-steel, shaft-mounted rocker arms (race versions used forged steel rockers), and a front-mounted external oil pump driven by the camshaft. The 'B' series wedge engine was introduced in 1958 with 350 and 361 cubic inch versions; the 361 would last until the end of the series, albeit for trucks only. B engines[edit] 350[edit] The 361 was essentially a bored 350. 361[edit] 383[edit] 400[edit]