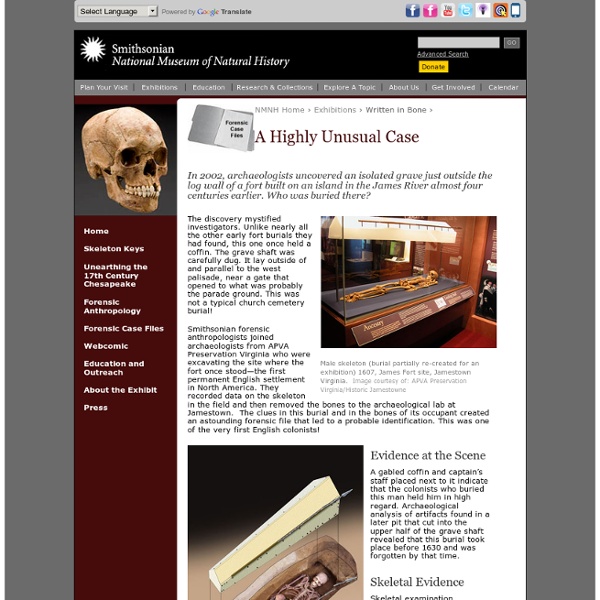 In 2002, archaeologists uncovered an isolated grave just outside the log wall of a fort built on an island in the James River almost four centuries earlier. Who was buried there? Male skeleton (burial partially re-created for an exhibition) 1607, James Fort site, Jamestown Virginia. Image courtesy of: APVA Preservation Virginia/Historic Jamestowne The discovery mystified investigators. Smithsonian forensic anthropologists joined archaeologists from APVA Preservation Virginia who were excavating the site where the fort once stood—the first permanent English settlement in North America. A computer-generated image of the burial, based on evidence of nails recovered from the grave. Evidence at the Scene A gabled coffin and captain’s staff placed next to it indicate that the colonists who buried this man held him in high regard. Skeletal Evidence Skeletal examination identified the remains as those of a European male, about 5 feet 3 inches tall, and 30 to 36 years old. A Probable ID

The Tarahumaras: An Endangered Species : Mexico Culture & Arts Shep Lenchek Never conquered by the Aztecs and despite being defeated by Mexican armies, the Tarahumaras still consider themselves an independant nation. So strong is this conviction that in the Fifties they more than once took complaints directly to the United Nations. Perhaps the purest and most unmixed of any Indian tribe in Mexico, so little is known about them that their true name "Raramuri" was corrupted to "Tarahumara" by white men and never corrected. Most of the world knows them only as long distance runners. However, this running ability is only one facet of their life style. Psychologists suggest that over the centuries this value system has actually caused physiological changes in their brain that preclude speaking anything but the truth. Luis G. God is both Father and Mother. Today the "People" (the translation of the name Raramuri) have been driven into the highest reaches of the Sierra Tarahumara, in the State of Chihuahua.

Researchers uncover 8,000 years of human history hidden in the Middle East Which would be interesting, seeing as, when interpreted literally, the Bible also claims that the universe was created between 6000-8000 years ago. Which is problematic, to say the least. EDIT: Not to mention the mental gymnastics required to reconcile the (presumably) carbon dating of the earliest Mesopotamian settlements to 8000 years ago and the fact that that same dating methods go on to describe artifacts and fossils that are up to 40 000 years old. As I recall, Asimov hypothesized that the age of creation used in the Bible is actually linked to the point at which we (or rather Near Eastern peoples) began recording history in the form of writing. Not sure how strong his evidence was but it sounds reasonable intuitively. That's always been the same assumption that I have made. Population growth: Ban homosexuality. Sanitary living conditions: Explain sources of clean water, and to cook meat, but not eat some meat. Etc.

Comics & Anthropology « Public Space, Information Accessibility, Technology, and Diversity at Oslo University College This comic book, in both its form and content, breaks with the traditional way of presenting ethnography. Traditionally, anthropology has been a written enterprise. Writing is perceived as the most scientific form of representation of social life. However, other forms of representation exist—not only in other disciplines (like art) but also within anthropology and social sciences. Anthropological findings have been presented in such forms as photography, film, and material exhibitions. Visual anthropology is mostly concerned with the examination and production of ethnographic film and photography in which the product shows signs of a documentary perspective and real individuals participate in those productions. This comic book is a collection of ethnographic situations. While working on this collection, various storylines, narrative arcs, drawings, and so forth, we were faced with a series of esthetic, philosophical, and ethical choices. Like this: Like Loading...

The mystery of the labyrinth by Mirko Elviro This symbol represents a real mystery: in fact it appears in very different places and times. Its meaning is a mystery. Some researchers believe that it is a "ritual course", confining it to the religious-mystic field. Stone track on Isle of Gotland (Sweden) Courtesy of www.geomancy.org Decoration on an Etruscan vase found in Tragliatella (Italy) Rupestrian inscription in Rocky Valley, just North of Tintagel, in Cornwall (England) Engraving on a coin of Cnosso (Isle of Creta) Holy symbol of Hopi indians (Pueblo tribe of the southwestern United States) Symbol discovered in Sibbo, Finland Symbol present in the Manas Chakra (Rajastan, India) Symbol present in the temple of Kom Ombo (Egypt) Labyrinth reported by Daniele ZeriFor further informations about this discovery, keep on reading Symbol present in the "Domus de Jana" of Luzzanas in Sardinia (Italy); it's dated about 6000 years old Labyrinth reported by Stefano F. Symbol present on a pottery fragment from Syria What does it mean?

HAU: Journal of Ethnographic Theory As every experienced fieldworker knows, the most difficult task in social anthropological fieldwork is to determine the meaning of a few key words, upon an understanding of which the success of the whole investigation depends. – E. E. Evans-Pritchard HAU: Journal of Ethnographic Theory, is an international peer-reviewed, open-access journal which aims to situate ethnography as the prime heuristic of anthropology, and return it to the forefront of conceptual developments in the discipline. The journal is motivated by the need to reinstate ethnographic theorization in contemporary anthropology as a potent alternative to its 'explanation' or 'contextualization' by philosophical arguments, moves which have resulted in a loss of the discipline’s distinctive theoretical nerve.

Tutorials - Google Apps Script These tutorials are designed to help you start using Google Apps Scripts more quickly. Some of these tutorials focus on the basics, some provide an in-depth analysis of a complex script, while others address specific nuances of the Google Apps Script system itself. Basics and working with Google Sheets Your First Script - This tutorial covers the basics of writing and executing a script, demonstrating how to create a Google Document and send an email. Your First Custom Function - This tutorial teaches you how to create custom spreadsheet functions which can be used as part of normal spreadsheet formulas. Sending Emails from a Spreadsheet - This tutorial shows how to use spreadsheet data to send emails to different people. Integration with other services Creating a Google Site - This tutorial shows how to gather data from Gmail Contacts and Calendar to create a Google Site for our fictional soccer team. Workflows and end-to-end examples Older tutorials (no longer maintained)

Improve Your Search Skills with These Challenges Daniel Russell is a Google employee who studies how people search on the Internet. He's a search anthropologist. I had the pleasure of meeting him and learning from him at the Google Teacher Academy that I attended in 2009. On his blog Search ReSearch Daniel Russell posts search challenges for readers to try. Applications for Education If you want to become a better web researcher and pass those skills on to your students, try Daniel Russell's search challenges.