8/29: 'Don't beat us, just shoot us': Kashmiris allege violent army crackdown. Media playback is unsupported on your device Security forces in Indian-administered Kashmir have been accused of carrying out beatings and torture in the wake of the government's decision to strip the region of its autonomy. 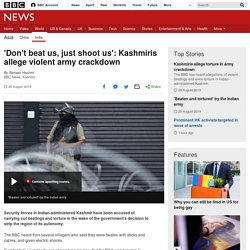 The BBC heard from several villagers who said they were beaten with sticks and cables, and given electric shocks. Residents in several villages showed me injuries. But the BBC was not able to verify the allegations with officials. The Indian army has called them "baseless and unsubstantiated". 8/29: Trump tweets 2020 campaign ad w/logo used by white supremacists. 8/23: David Koch reshaped America for the worse. His life's work was the destruction of others. How does one eulogize a villain? 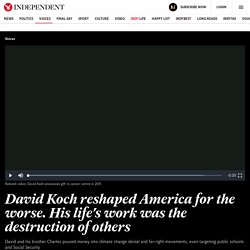 It’s a question I find myself asking today after reading the news that David H Koch has died. What else can we really call a man who spent his entire adult life enriching himself at the expense of the world around him, leaving in his wake millions of destroyed lives, a planet on the brink of ecological catastrophe, and a nuclear superpower governed by a far-right political party? 8/23: David Koch, billionaire industrialist who influenced conservative politics, dies at 79. 8/21: Greenland isn't Denmark's to sell: essential reading for Trump on colonialism.

Donald Trump is not the first US President to make an offer of buying Greenland from Denmark – but he might be the last. 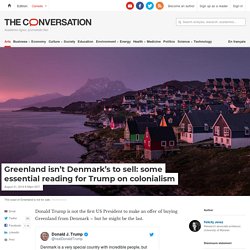 Home of some 56,000 people and around 80% covered by ice, Greenland is culturally connected to Europe – but physiographically it is a part of the continent of North America. The USA has purchased from the icy northern territories before. In 1867, they bought Alaska for US$7.2 million from Russia, who established settlements there in the late eighteenth century. Then (as now) no local Indigenous people were consulted in the transaction. 8/21: These women's accomplishments tell another story of America. Two American Democrat representatives have been forbidden to enter Israel: “What are Trump and Netanyahu afraid of?” 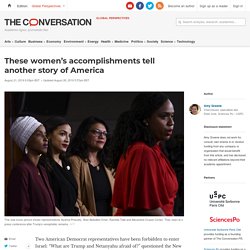 Questioned the New York Times in an op-ed stating that such a decision “shows weakness and intolerance, not strength”. The two Democratic representatives are Ilhan Omar, of Minnesota, and Michigan’s Rashida Tlaib. Together with Alexandria Ocasio-Cortez (New York’s 14th congressional district) and Ayanna Pressley (Massachusetts’ 7th district) they form what is known as “The Squad”. 8/21: Parents Gave Up Custody of Their Children to Help Them Qualify for Financial Aid. Now, Some Are Abandoning That Idea. ProPublica Illinois is an independent, nonprofit newsroom that produces investigative journalism with moral force. 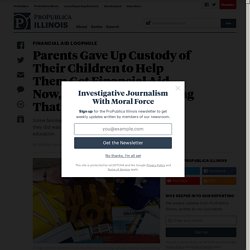 Sign up for our newsletter to get weekly updates written by our journalists. Amid state and federal scrutiny as well as a public backlash, more than a half-dozen suburban Chicago families who had recently gone to court to give up guardianship of their college-bound teens to qualify for financial aid they wouldn’t otherwise receive are now quietly letting their cases lapse. Though some families remain unapologetic about their use of a practice that had gone largely unnoticed until three weeks ago, they say the real issue is not that they tried to take advantage of a legal loophole but the exorbitant cost of higher education.

“A lot of families are afraid to say what they are thinking,” said one mother, whose son’s case closed last week when the family decided not to pursue it. 8/20: Mathematical framework turns any sheet of material into any shape using kirigami cuts. Researchers from the Harvard John A. 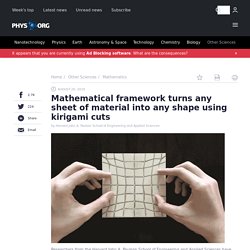 Paulson School of Engineering and Applied Sciences (SEAS) have developed a mathematical framework that can turn any sheet of material into any prescribed shape, inspired by the paper craft termed kirigami (from the Japanese, kiri, meaning to cut and kami, meaning paper). Unlike its better-known cousin origami, which uses folds to shape paper, kirigami relies on a pattern of cuts in a flat paper sheet to change its flexibility and allow it to morph into 3-D shapes.

8/20: 3 Migrant children die of flu in detention with US authorities refusing to give vaccines, as reports of child molesting emerge. At least three migrant children being held in detention centres have died after suffering from flu, but US Customs and Border Protection (CBP) has said that it does not plan to vaccinate detained immigrant families as winter approaches. 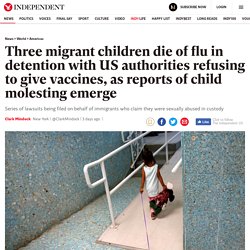 Further reports suggest children are being molested in some sites while in the care of the government. “In general, due to the short-term nature of CBP holding and the complexities of operating vaccination programmes, neither CBP nor its medical contractors administer vaccinations to those in our custody,” a CBP spokeswoman said in a statement emailed to the CNBC news channel. We’ll tell you what’s true. You can form your own view. From 15p €0.18 $0.18 USD 0.27 a day, more exclusives, analysis and extras. Dr Jonathan Winickoff, a paediatric professor at Harvard, told CNBC: "I can tell you from personal experience that child deaths are rare events. " 8/19: Inside The Prison Where Inmates Set Each Other On Fire and Gangs Have More Power Than Guards.

8/15: Appeals court rules Trump administration must provide hygiene products at migrant facilities. 8/13:Barr says there must be 'zero tolerance for resisting police' & goes after 'social-justice reformers' in heated speech to the US's largest law-enforcement organization. 8/12: 'Coal is over' -US miners rooting for the Green New Deal. Set in a wooded valley between the Tug Fork river and the Mate creek, Matewan, West Virginia was the site of the 1920 Matewan Massacre, a shoot-out between pro-union coal miners and coal company agents that left 10 people dead and triggered one of the most brutal fights over the future of the coal industry in US history. 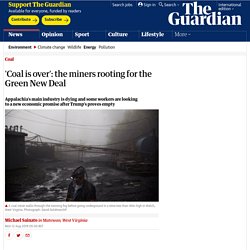 The coal industry in Appalachia is dying – something that people there know better than anyone. Some in this region are pinning their hopes on alternative solutions, including rising Democratic star Alexandria Ocasio-Cortez’s Green New Deal. “Coal is over. Forget coal,” said Jimmy Simpkins, who worked as a coal miner in the area for 29 years. “It can never be back to what it was in our heyday. A coal production forecast conducted in 2018 by the University of West Virginia estimates coal production will continue to decline over the next two decades.

The town was at the center of the American labor movement in the early 20th century. 8/15: DOL suggests Fed contractors should be able to practice employment discrimination. 8/8: Trump May Grant Clemency to Blagojevich, Former Illinois Governor and 'Celebrity Apprentice' Contestant. We can no longer stick to the status quo because the trailer for Disney+’s upcoming “High School Musical: The Musical: The Series” dropped during D23 Expo Friday, and we have zero chill about the first look at this ridiculously meta show. 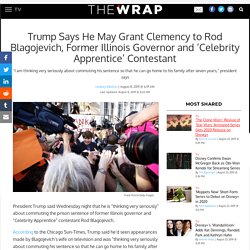 In the 1-minute, 40-second video above, you’ll be introduced to the high schoolers who are going to play Troy, Gabriella, Sharpay, Ryan and more of the classic characters from the 2006 Disney Channel Original Movie “High School Musical” in their student production of a musical based on said movie. And their school happens to be the same one where the movie was filmed. 8/7:Chicago isn’t numb to violence. But if Ivanka wants to help … 8/6: Article 370: What happened with Kashmir and why it matters. Image copyright Getty Images India's BJP-led government is hailing its decision to strip the state of Jammu and Kashmir of autonomy after seven decades, characterising it as the correction of a "historical blunder".

The BBC's Geeta Pandey in Delhi explains why this has happened and why it's important. 8/2/19: Emails indicate Miller pressed hard to limit green cards. White House senior adviser Stephen Miller wasn't getting an immigration regulation he wanted. So he sent a series of scorching emails to top immigration officials, calling the department an "embarrassment" for not acting faster. The regulation in question would allow the Department of Homeland Security to bar legal immigrants from obtaining green cards if they receive certain government benefits.

The rule will likely be released in the coming days, according to a pair of current and former Trump officials briefed on the timeline. Advertisement The emails, which POLITICO obtained through the Freedom of Information Act, shed new light on how aggressively Miller has pressured the Department of Homeland Security to move faster on regulations to limit immigration.