The Bystander Effect & How to Counteract It

Ever faced a public situation where a stranger is in need of help but everyone just seems to either hurry along or stand around and watch? Ever felt the hesitation to offer help in this situation too? This is what is called the Bystander Effect.

According to the Bystander Effect theory, individuals are less likely to take action and offer help to someone in need when there are more people around.

While we might all like to believe that this is true, psychologists suggest that whether or not you intervene might depend upon the number of other witnesses present. Why does the Bystander Effect Occur? Darley & Latane (1968) Ethics Defined: Diffusion of Responsibility. Pluralistic Ignorance: Definition. What is EVALUATION APPREHENSION MODEL? What does EVALUATION APPREHENSION MODEL mean? Other Explanations. The bystander effect is complicated. Darley and Latane (1968) Controversies Presentation. 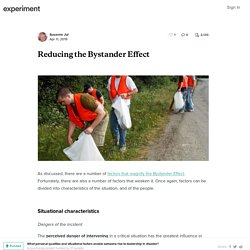 Fortunately, there are also a number of factors that weaken it. Once again, factors can be divided into characteristics of the situation, and of the people. Situational characteristics Dangers of the incident The perceived danger of intervening in a critical situation has the greatest influence in reducing the Bystander Effect. Several explanations could account for the role of perceived danger. Most fundamentally, the arousal: cost–reward model suggests that taking action is a response to the physiological arousal engendered by a critical situation, and that.

Helping Kids Overcome the Bystander Effect. Newscasters love to share stories of kids as young as three years old calling 911 to save a parent’s life.

These stories bear out what research has shown us: Very young children have a propensity to be kind and helpful. Starting as early as 18 months, studies show, toddlers spontaneously help an adult who is unable to pick up something he dropped or finds himself in a similarly tricky situation. Being kind at a cost to themselves makes two year olds happy, and three year olds who cooperate on a task share rewards even when they don’t have to. Counteracting the Bystander Effect. The Bystander Effect In The Cellphone Age. It was the start of the third inning between two teams in the Pony division of the Jamaica Plain Regan Youth League. 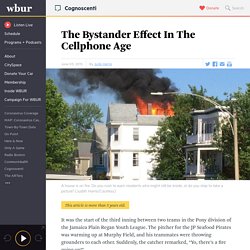 The pitcher for the JP Seafood Pirates was warming up at Murphy Field, and his teammates were throwing grounders to each other. Suddenly, the catcher remarked, “Yo, there’s a fire going on!” It was a bench clearing moment. Members of the Matt Gore Real Estate Orioles joined their rivals in right field, gazing in disbelief as vivid orange flames shot off the roof of a triple-decker, some 300 feet down Child Street. A coach and other adults called 911, and parents abandoned the game and rushed toward the scene. When my husband first ran toward the burning house, he noticed a passerby taking pictures.

There were no emergency vehicles there yet. A bewildered woman, wondering why an agitated stranger was telling her to leave, opened the door to the first floor apartment. “I kept telling her, ‘You’ve got to get out right now,’ ” my husband said. Cellphone use linked to selfish behavior. Though cellphones are usually considered devices that connect people, they may make users less socially minded, finds a recent study from the University of Maryland's Robert H. 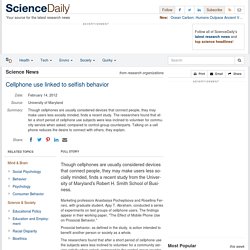 Smith School of Business. Marketing professors Anastasiya Pocheptsova and Rosellina Ferraro, with graduate student, Ajay T. Abraham, conducted a series of experiments on test groups of cellphone users. The findings appear in their working paper, "The Effect of Mobile Phone Use on Prosocial Behavior. " Prosocial behavior, as defined in the study, is action intended to benefit another person or society as a whole. Bystander Effect and Handphones. Conclusion.