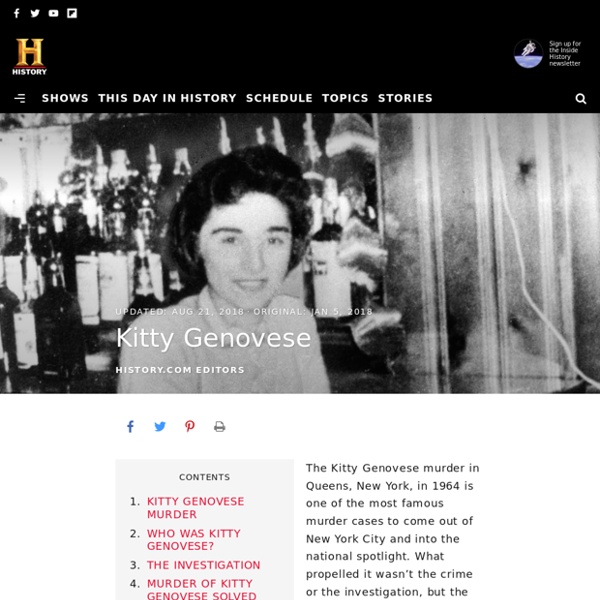 The Kitty Genovese murder in Queens, New York, in 1964 is one of the most famous murder cases to come out of New York City and into the national spotlight. What propelled it wasn’t the crime or the investigation, but the press coverage that alleged the murder had many witnesses who refused to come to the Kitty Genovese’s defense. This has been disproved over time, but not before it became part of the accepted lore of the crime. Kitty Genovese was returning from work home at around 2:30 a.m. on March 13, 1964, when she was approached by a man with a knife. Genovese ran toward her apartment building front door, and the man grabbed her and stabbed her while she screamed. A neighbor, Robert Mozer, yelled out his window, “Let that girl alone!” Genovese, seriously injured, crawled to the rear of her apartment building, out of the view of any possible witnesses. She was found by neighbor Sophia Farrar, who screamed for someone to call the police. Kitty Genovese.

More bystanders responding to CPR incidents thanks to 3 public health interventions: Study, Singapore News SINGAPORE - A study has found that three measures, when applied together, have more than doubled the likelihood of bystanders performing cardiopulmonary resuscitation (CPR) on cardiac arrest victims in Singapore. Dispatch-assisted CPR, CPR and automated external defibrillator training, and the Singapore Civil Defence Force's myResponder app were found to have increased the responses of bystanders giving life-saving assistance to heart attack victims before paramedics attended to them. Dispatch-assisted CPR refers to CPR that is administered under the guidance of a first responder, such as a paramedic who may, through a phone call, assess the situation and give instructions to a bystander, who then performs CPR. The study was conducted by researchers at the Duke-NUS Medical School, Duke University, and several organisations here, and published in August.

Bystander Intervention Resources Bystander Intervention Training Hollaback! provides trainings on how to do your part to protect your neighbors and co-workers when bias and harassment collide in front of you. What’s worse than being targeted with harassment because of your race, sex, religion, color, gender, size, orientation, disability, age, or origin? Being targeted while surrounded by bystanders who see what is happening, but then do nothing. It doesn’t have to be that way.

(4a) Case study on Zhumadian article Horrifying footage has emerged online showing a woman being hit by a taxi and left lying in the middle of a crossroad for more than two minutes - and is then run over a second time. Over 20 onlookers ignored the wounded pedestrian as they walked past her before an SUV ran her over for a second time, according to Daily Mail. She was killed after the second accident, said the police. What type of bystander are you? What type of bystander are you? by: iandbbi 58 Responses 0.0/5.0 (0 votes) Remove from Favorites Add to Favorites How to Break the Bystander Effect They could have left it to someone else. An Army veteran blocked a shooter in Oregon from entering his classroom. Three friends on a high-speed train from Paris to Amsterdam helped stop a gunman wielding an AK-47. This past spring, an Army captain in North Carolina pulled a couple to safety after a fiery car crash.

Man slashed & robbed at Tanglin Halt claims witnesses "did nothing to help" - Mothership.SG - News from Singapore, Asia and around the world A 58-year-old man was recently arrested for his suspected involvement in a case of armed robbery. On Oct. 13, the suspect slashed another man with a fruit knife near Tanglin Halt Road, and managed to get away with the victim's mobile phone as well. The suspect was arrested on the same day and was subsequently charged in court two days after the incident. "Intervene" Bystander Campaign Project Description The Skorton Center for Health Initiatives at Cornell Health, in collaboration with the Cornell Interactive Theater Ensemble, has developed a new bystander intervention video and workshop called Intervene © 2016. What is Intervene? Intervene is both a video and a workshop: Video: The online 20-minute video Intervene includes brief filmed scenarios demonstrating ways in which student bystanders can successfully intervene in problematic situations. Seven different situations are addressed, including sexual assault, sexual harassment, intimate partner violence (emotional abuse), hazing, alcohol emergency, emotional distress, and bias.