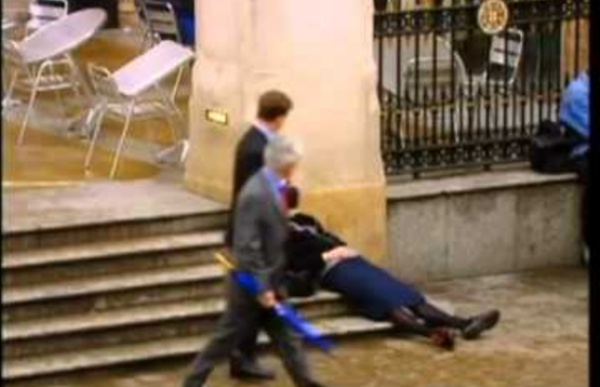 Criminal vs. Civil Court Cases The judicial branch must apply the existing laws to each individual situation, to be sure justice is administered fairly. This includes punishing those who are guilty of breaking the law, and keeping the rest of the community safe from crime. Courts also settle disputes between citizens that they can’t resolve on their own. In criminal cases, the government brings a case against one or more defendants. The defendant in a criminal case is the person being accused of committing a crime by the government. Bystander effect: Famous psychology result could be completely wrong By Grace Browne SolStock/Getty If you were being attacked, would anyone stop to help you? A famous result in psychology known as the bystander effect says probably not, but now a review of real-life violent situations says this commonly held view may be wrong. The bystander effect purports that in situations such as a robbery or a stabbing, bystanders are less likely to step in if there are a large number of people in the area, so the likelihood of intervention decreases. The idea has its roots in the 1964 case of Kitty Genovese, a 28-year-old woman who was raped and murdered in the early morning in her quiet neighbourhood in Queens, New York.

How to Be Kinder to Strangers in Singapore The Charities Aid Foundation recently released the World Giving Index 2017, which provides insight into the scope and nature of giving around the world. Based on data collected from the Gallup World Poll, the index, which polled 1,000 individuals in each representative country, revealed two surprising facts. Myanmar, Indonesia and Kenya turned out to be among the most charitable countries, even though they have a huge number of their populations living below the poverty line. Being poor does not stop one from being generous.

(4a) Case study on Zhumadian article Horrifying footage has emerged online showing a woman being hit by a taxi and left lying in the middle of a crossroad for more than two minutes - and is then run over a second time. Over 20 onlookers ignored the wounded pedestrian as they walked past her before an SUV ran her over for a second time, according to Daily Mail. She was killed after the second accident, said the police. A video of the incident was uploaded by web user Yuan Qicong on Weibo, a Chinese social media platform, on June 7. The post has been viewed more than 26 million times. The footage shows the woman, in a white top, waiting in the middle of the road as she tried to go to the other side. How Diffusion of Responsibility Affects Group Behavior Diffusion of responsibility is a psychological phenomenon in which people are less likely to take action when in the presence of a large group of people.1 For example, imagine that you are in a large city on a bustling street. You notice a man fall to the ground and start convulsing as if having a seizure. Many people turn and look at the man, but no one moves to help or call for medical assistance.

Now. Powered by Northrop Grumman If you see someone in distress, will you help them? We all like to consider ourselves to be good people, but when we’re caught in the moment, we freeze. What is the bystander effect? For more than 50 years, psychologists have observed this phenomenon again and again in experiments and in real life. The research overwhelmingly shows the more people that are present when there’s an emergency, the less likely they are to help. What Is the Bystander Effect?

(5) Case study 2 : Kitty Genovese and bystander effect The Kitty Genovese murder in Queens, New York, in 1964 is one of the most famous murder cases to come out of New York City and into the national spotlight. What propelled it wasn’t the crime or the investigation, but the press coverage that alleged the murder had many witnesses who refused to come to the Kitty Genovese’s defense. This has been disproved over time, but not before it became part of the accepted lore of the crime. Kitty Genovese was returning from work home at around 2:30 a.m. on March 13, 1964, when she was approached by a man with a knife. Genovese ran toward her apartment building front door, and the man grabbed her and stabbed her while she screamed. A neighbor, Robert Mozer, yelled out his window, “Let that girl alone!”

The guide to being a better bystander But the desire to help people from marginalized groups who face harassment or threat isn't enough. We have to act. Just recently, on a New York subway, a young Muslim woman was reportedly subjected to verbal and physical harassment by three men; according to police, the woman said these men grabbed at her and called her a "terrorist" who should "get out of this country." Later, on Facebook, she lamented that "so many individuals chose to be bystanders," rather than intervening or trying to help her. It's not a matter of heroics.

Why Are More American Teenagers Than Ever Suffering From Severe Anxiety? At a workshop for parents last fall at the NW Anxiety Institute in Portland, Ore., Kevin Ashworth, the clinical director, warned them of the “illusion of control and certainty” that smartphones offer anxious young people desperate to manage their environments. “Teens will go places if they feel like they know everything that will happen, if they know everyone who will be there, if they can see who’s checked in online,” Ashworth told the parents. “But life doesn’t always come with that kind of certainty, and they’re never practicing the skill of rolling with the punches, of walking into an unknown or awkward social situation and learning that they can survive it.” Jean Twenge, a professor of psychology at San Diego State University who researches adolescent mental health and psychological differences among generations, used to be skeptical of those who sounded an alarm about teenage internet use.

Intervene - CornellCast STUDENT 1: Do you know them? Do you know her? STUDENT 2: Yeah. What Is the 'Bystander Effect' and How Do People Overcome It? This story appeared in the June 2020 issue as "Action!" Subscribe to Discover magazine for more stories like this. On April 9, 2017, three security officers from the Chicago Department of Aviation forcibly removed David Dao from an overbooked United Airlines flight. Dao, a 69-year-old doctor, was dragged down the plane’s aisle after he refused to give up his seat. In the process, his head hit an armrest and he was knocked unconscious.

Dr Zimbardo juxtaposes the tale of the good samaritan - treat everyone as you want others to treat you to the effects of the bystander effect, where people who need help don't get the help they need. A question is posed to the viewers: "Would I help?" In the experiments that follow, we see the bystander effect in all its forms. The pickpocket thief scenario sees a man not reacting to a pickpocket stealing something from a lady because he sees other bystanders ignoring it as well. The second experiment sees a drunk dishevelled man lying on the ground for 20 mins with no one intervening. The same man lays on the ground for 6 secs and many people intervened to help -- only this time he is dressed well and "looks the part". Enters a woman in plain clothes laying on the ground. A lady is seen to be deciding if she should help. When another man approaches the woman at the same time, the lady decides to intervene as well. This experiment shows how bystanders decide to intervene based on the appearance and status of the people in need of help. The video ends with 2 rules to the bystander effect: 1. we ought to help and 2. we do what others do. by vrncchin Sep 20

Dr Zimbardo kicks of this classic experiment with an impactful introduction to the concept of bystander effect, The Good Samaritan - Do unto others that you would have them do unto you. The moral or social code that date backs to the bible where it is expressed what one should do when they see person in need of help. There is so much we learn from as early as our childhood from parents, teachers, peers on being helpful, kind and thoughtful. Religious texts depicting acts of kindness, offering help and yet here we are knowing all the right things to do, yet we falter. In this video we will see two experiments. The first one will, show the most common occurrence that even we may have experienced, where you can watch how a man conforms to the group's reaction, he does nothing although he witnesses ac act of pickpocketing. Second in which how people offer help to strangers based on the attire/appearance. Makes you wonder how many time is Singapore have you seen a person sleeping at void-decks/public spaces and have simply walked past them? We do have many agencies doing outreach for the homeless but the general public mostly just ignores these people. Makes you wonder the empathy in our people. We see a stray cat and it rolls over when you walk near it, we immediately would stop to pet it. If we saw man sleeping in a public space most of us would away with no concerns whatsoever. comment by Vengaadesh S/O Rajendran -SUSS( PSY10😎- TMA01 by vengaadesh_rajendran Sep 20

Dr.Philip Zimbardo , President of Heroic Imagination Project. mentioned that the idea is you should treat everyone as you would want them to treat you. It's the golden rule to do unto others. It promotes the notion of social community. with a sense of reciprocity , we all should help one another if we ever want anyone to help us. The men in the blue shirt in the video also depicts the typical example of bystander effect. He thinks that if others managed to see the pickpocketing and did not take any action. Why should i? He's influenced by the apathy of everyone else in the queue. The experiment on liverpool street station in london also depicts a typical bystander effect. However, the actor in suit is helped within 6 seconds and when the actor changed to a casual attire, he was not offered help for more than 20 minutes. It also determines on what social status is the person. Professor Helen Haste also imparts 2 conflicting rule of bystanders effect , one rule is we ought to help and the other rule is to do what everybody else is doing. -Comments by Tan Jun Hao from SUSS by eaneternity Sep 19