What is the Bystander Effect?

The Bystander Apathy Experiment - The Case of Kitty Genovese In 1964, Kitty Genovese was murdered infront of her own home. When she was stabbed by an assailant, she screamed for help but her neighbours only shouted at the assailant to leave kitty alone. Her neighbours also saw the assailant fledding the scene and then returning again to fatally stab kitty. Her neighbours finally called the police and ambulance but it was already too late. All her neighbours were aware of the murder but did not take any actions during the time. This led Darley and Latané to experiment through a similar event but with a blind prerecorded voice discussions with university students and seeing if they will take actions when one of them in discussion suddenly have a seizure. The experiment sees diffusion of responsibility and pluralistic ignorance, much like in the kitty genovese murder case. – vrncchin

The Science of Empathy. How Diffusion of Responsibility Affects Group Behavior.

The article explains why diffusion of responsibility happens in the Bystander Effect. Diffusion of responsibility is described as a psychological phenomenon where people are less likely to intervene when they are in the presence of a big group. Diffusion of responsibility happens because they are so many people present. No one feels the pressure to respond to the situation because they think someone else might help, or if no one else is responding, one might think the situation must not be serious that it requires intervention. This is seen in Darley and Latane's experiment where participants are placed in a room when smoke suddenly enters the room. When alone, the subject reported the smoke right away, but in presence of others ignoring the smoke, the subject will also ignore it. – vrncchin 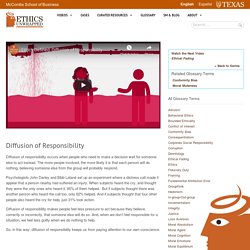 The more people involved, the more likely it is that each person will do nothing, believing someone else from the group will probably respond. Psychologists John Darley and Bibb Latané set up an experiment where a distress call made it appear that a person nearby had suffered an injury. When subjects heard the cry, and thought they were the only ones who heard it, 85% of them helped. But if subjects thought there was another person who heard the call too, only 62% helped.

And if subjects thought that four other people also heard the cry for help, just 31% took action. Diffusion of responsibility makes people feel less pressure to act because they believe, correctly or incorrectly, that someone else will do so. How to Overcome the Bystander Effect. Psychologists have long been interested in exactly why and when we help other people.

Factors that can help overcome the bystander effect. 1. Witnessing helping behaviour in others - feeling inspired by other kind acts 2. Being observant - staying alert to your surroundings 3. Being skilled and knowledgeable - take first aid classes or BCLS 4. Guilt - Survivor's guilt 5. Having Personal relationship - make eye contact and engage in small talks 6. Seeing others as deserving of help - see the good in others 7. Feeling good - happiness and success can lead to helping others – vrncchin

There has also been a tremendous amount of interest in the reasons why we sometimes don't help others.

The bystander effect is a social phenomenon that occurs when people fail to help those in need due to the presence of other people. In many cases, people feel that since there are other people around, surely someone else will leap into action.1 While the bystander effect can have a negative impact on prosocial behavior, altruism and heroism, researchers have identified a number of different factors that can help people overcome this tendency and increase the likelihood that they will engage in helping behaviors.2 Some of these include: Witnessing Helping Behavior.

The guide to being a better bystander. But the desire to help people from marginalized groups who face harassment or threat isn't enough. 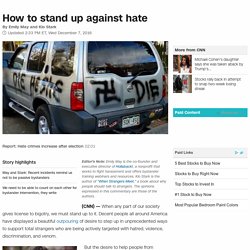 We have to act. Just recently, on a New York subway, a young Muslim woman was reportedly subjected to verbal and physical harassment by three men; according to police, the woman said these men grabbed at her and called her a "terrorist" who should "get out of this country. " Later, on Facebook, she lamented that "so many individuals chose to be bystanders," rather than intervening or trying to help her. The Three D’s of D.O.T Intervention: Direct, Distract, and Delegate. You may be wondering about how you can intervene if you see an incidence of violence happening or a situation has the potential for violence? 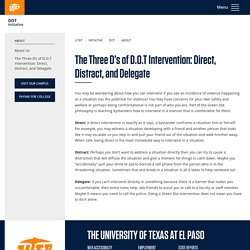 You may have concerns for your own safety and welfare or perhaps being confrontational is not part of who you are. Part of the Green Dot philosophy is teaching bystanders how to intervene in a manner that is comfortable for them.Direct: A direct intervention is exactly as it says; a bystander confronts a situation him or herself. For example, you may witness a situation developing with a friend and another person that looks like it may escalate so you step in and pull your friend out of the situation and walk him/her away. Active bystander.

Ways you can intervene and counteract the bystander effect -- shown in a comedic way. Notice how everyone is aware of the harrassment happening but it took only one person to intervene and just like that, every one is supportive and applauds. – vrncchin

Save-A-Life Initiative SCFC introduced the initiative with 3 components 1. Hardware - AED in public areas like lift landings. Allows others help cardiac arrest patients, can refer to the AED database on the myResponder app to retrieve the AEDs. 2. Heartware - Free CPR-AED courses for residents at community centres 3. Software - myResponder app to notify Community First Responders of any potential cardiac arrests within 400m. Shows location of AEDs and Call 995 function that can detect current geolocation to SCDF. – vrncchin

Simple knowledge that can save lives.

What to do and how to save someone's life - whether they are choking, bleeding, unresponsive, breathing difficultly, or having a heart attack. – vrncchin

Quiz & Worksheet - The Bystander Effect. Quiz: Are You A Bully, Victim, Passive Bystander, Or An Active Bystander?

Find out how you will react in a social situation. Are you a bully, victim, passive bystander, or active bystander? – vrncchin