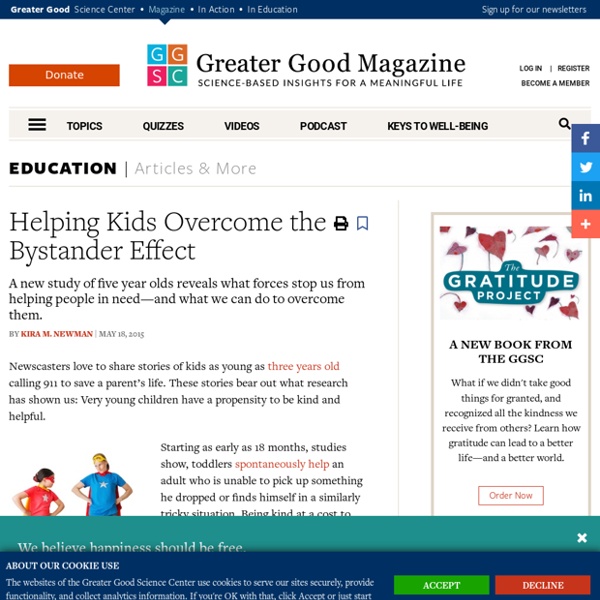 Newscasters love to share stories of kids as young as three years old calling 911 to save a parent’s life. These stories bear out what research has shown us: Very young children have a propensity to be kind and helpful. Starting as early as 18 months, studies show, toddlers spontaneously help an adult who is unable to pick up something he dropped or finds himself in a similarly tricky situation. Being kind at a cost to themselves makes two year olds happy, and three year olds who cooperate on a task share rewards even when they don’t have to. But a recent study suggests that, like adults, kids are also subject to a major obstacle to helping: the bystander effect. That’s when being part of a group paralyzes people from coming to the aid of someone in need—a phenomenon well documented by social psychologists. In this study, five year olds were coloring pictures when they witnessed an adult “accidentally” spill colored water all over her desk. But there was a twist. Explicit teaching.

Mike Pence and the Bystander Effect in Action A few weeks ago a friend emailed me to share a story about her daughter, Claire, a recent college graduate living and working in Boston. In March, as it was starting to become clear that the coronavirus was going to severely impact daily life in Massachusetts, Claire, who is Asian, was on the bus heading into work when a clearly crazy man started yelling at her. He told her that she needed to go back to China and that the Chinese people caused all these problems. Being verbally assaulted on public transportation was obviously unsettling. But what was even more horrifying to her mom was that not a single person on the bus came to Claire’s defense. Overcoming the Bystander Effect: How People Can Help Each Other Online and IRL Nir’s Note: This guest post is by Max Ogles, who writes at MaxOgles.com. On March 27, 1964, Kitty Genovese was brutally attacked and killed in the open streets of New York City. What makes Genovese’s story so tragic is that police later discovered numerous people were aware of Genovese’s distress but never came to her aid. Though the total number of witnesses is disputed, the story stands as an example of the bystander effect, the psychological phenomenon where people are less likely to assist if they know others are around. But there’s good news. A 2011 research study showed that the bystander effect can actually be reversed.

How to be kinder to strangers in Singapore, Opinion News The Charities Aid Foundation recently released the World Giving Index 2017, which provides insight into the scope and nature of giving around the world. Based on data collected from the Gallup World Poll, the index, which polled 1,000 individuals in each representative country, revealed two surprising facts. Myanmar, Indonesia and Kenya turned out to be among the most charitable countries, even though they have a huge number of their populations living below the poverty line. Being poor does not stop one from being generous. 10 Notorious Cases of the Bystander Effect The bystander effect is the somewhat controversial name given to a social psychological phenomenon in cases where individuals do not offer help in an emergency situation when other people are present. The probability of help has in the past been thought to be inversely proportional to the number of bystanders. In other words, the greater the number of bystanders, the less likely it is that any one of them will help. This list describes the prototype of the effect and cites nine particularly heinous examples. The Parable of The Good Samaritan

Kitty Genovese The Kitty Genovese murder in Queens, New York, in 1964 is one of the most famous murder cases to come out of New York City and into the national spotlight. What propelled it wasn’t the crime or the investigation, but the press coverage that alleged the murder had many witnesses who refused to come to the Kitty Genovese’s defense. This has been disproved over time, but not before it became part of the accepted lore of the crime. Kitty Genovese was returning from work home at around 2:30 a.m. on March 13, 1964, when she was approached by a man with a knife. Genovese ran toward her apartment building front door, and the man grabbed her and stabbed her while she screamed. A neighbor, Robert Mozer, yelled out his window, “Let that girl alone!”

Yes, Individual Responsibility Is Essential In November, Sierra published an article by one of the magazine’s editors, Katie O’Reilly, about her personal struggle in deciding whether to have children in the age of climate chaos and mass extinction. Conversations about procreation are always fraught and, as expected, the essay sparked intense discussion. It was striking, however, that some readers chose to focus on the fact that O’Reilly dared to even consider the idea that individuals hold some measure of responsibility for addressing the climate crisis. Responding to the article on Twitter, a professor at Carnegie Mellon University complained, “The ‘don’t have kids because of climate’ argument is bunk, & absolves the choices of companies & policymakers.”

Overcoming the bystander effect in chemical ethics For PNNL chemist and Air Force veteran Kabrena Rodda, living by an honor code is second nature. Her time at the Air Force Academy as both a cadet and later an instructor, instilled in her the value—and possibility—of a community that joins to uphold a standard of ideals, honesty, and responsibility. This background made Rodda well positioned to join with the American Chemical Society and the Organization for the Prohibition of Chemical Weapons to establish an honor code for the international community of chemists using The Hague Ethical Guidelines to guide discussions during the drafting. The resulting Global Chemists' Code of Ethics (GCCE) combined grassroots contributions from 18 countries in Europe, Asia, America, and the Middle East to define ethical standards working chemists are already expected to employ. "When we came to consensus on the GCCE, there was enormous enthusiasm about sharing it," said Rodda.

Overcoming the Bystander Effect Have you ever been a hero? Going about our daily routines, few of us have the opportunity to save a life or disrupt a crime in progress—fewer still take that opportunity when it presents itself. I once witnessed a car accident in which the guilty party leapt from his disabled vehicle and fled the scene. I quickly pulled over and dialed 911. Fortunately, another passerby stopped and apprehended the suspect. The culprit—who was clearly intoxicated—struggled to escape, but he was easily overpowered.

This research shows that children have instincts to help, but they may need a little push at times, otherwise even a 5-year-old kid may succumb to the Bystander Effect. One of the ways to increase children's chances of being active bystanders is to explicitly teach them about the Bystander Effect and its consequences. by agnestan Sep 22