Chow Panda 'lookalike' dogs are hit with China's middle classes. The middle class in China are snapping up dogs that resemble pandasPet shop owners use grooming and colouring to give them new lookAnimal will look the same for six weeks before it needs another trim By Julian Robinson Published: 15:02 GMT, 12 May 2014 | Updated: 17:57 GMT, 12 May 2014 It is panda-monium in pet shops in China as dogs that look like the country's unique and rare bears become all the rage. 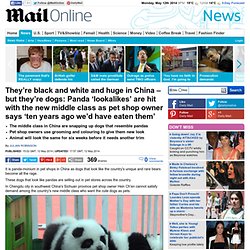 These dogs that look like pandas are selling out in pet stores across the country. In Chengdu city in southwest China's Sichuan province pet shop owner Hsin Ch'en cannot satisfy demand among the country's new middle class who want the cute dogs as pets. Dogs that look like pandas have become a huge hit with China's middle class as more and more of the nation's citizens look to own a dog as a companion The cute animals have been selling out at pet shops across China. 'Ten years ago the natural instinct of a Chinese person was to eat a dog,' he said.

23 Animals Who Are Absolute Sh*t At Hide-And-Seek. The business of "hide-and-seek" is uncomplicated. 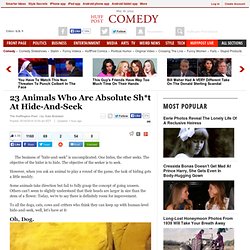 One hides, the other seeks. The objective of the hider is to hide. The objective of the seeker is to seek. However, when you ask an animal to play a round of the game, the task of hiding gets a little muddy. Some animals take direction but fail to fully grasp the concept of going unseen. To all the dogs, cats, cows and critters who think they can keep up with human-level hide-and-seek, well, let's have at it: Oh, Dog. What are we going to do about that snout? Turtle, you are under that bird. If a cow hides in the woods, can anybody see her? Yes. Dog! And if you see my reflection in the snow covered hills, then you are bad at hiding. Cat. Source So, we spot you, Cat. Attention, Dog. A little pathetic, no? You are in the trash, Cat. Cats, this is just a game and you took it too far. This move? Comfort Dogs Return To Boston For Cuddles Ahead Of 2014 Marathon. Boston is in for some extra tender loving care this weekend now that the Lutheran Church Charities K-9 Comfort Dogs have returned for the 2014 Boston Marathon. 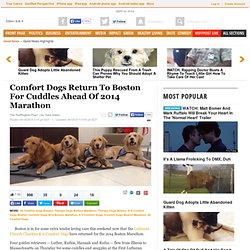 Four golden retrievers -- Luther, Ruthie, Hannah and Rufus -- flew from Illinois to Massachusetts on Thursday for some cuddles and snuggles at the First Lutheran Church of Boston. Two other comfort dogs, who have been stationed in Newtown, Conn., also arrived for the marathon earlier this week. (Story continues below) Their arrival marks the fourth time the crew of comfort dogs has headed to Boston in the past year to work with marathon survivors and their families. Several of the golden retrievers were dispatched to the city shortly after the bombings last year, and were placed at the church and local hospitals. "Dogs just bring a wonderful comfort," Tim Hetzner, president of LCC K-9 Comfort Dogs, told Yahoo News. H/t Reddit Uplifting News Lutheran Church Charities. The Sloth Sanctuary history and beginnings of sloth rescue in Costa Rica. — Sloth Sanctuary of Costa Rica. Judy Avey-Arroyo grew up in Alaska where she met her globe-trotting Costa Rican husband, Luis Arroyo, in 1970. 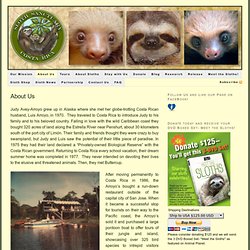 They traveled to Costa Rica to introduce Judy to his family and to his beloved country. Falling in love with the wild Caribbean coast they bought 320 acres of land along the Estrella River near Penshurt, about 30 kilometers south of the port city of Limón. Their family and friends thought they were crazy to buy swampland, but Judy and Luis saw the potential of their little piece of paradise.

In 1975 they had their land declared a “Privately-owned Biological Reserve” with the Costa Rican government. Returning to Costa Rica every school vacation, their dream summer home was completed in 1977. After moving permanently to Costa Rica in 1986, the Arroyo’s bought a run-down restaurant outside of the capital city of San Jose.

In 1991, a deadly 7.6 magnitude earthquake struck near Limón, destroying the family’s home and putting an end to their popular riverboat bird watching tour. National Pet Month: 20 Reasons Why We Love Our Pets. Goats Play On Metal Sheet. The woman who lost a dog and gained 200 sloths. 3 April 2014Last updated at 19:10 ET By Vibeke Venema BBC World Service Monique Pool first fell in love with sloths when she took in an orphan from a rescue centre. 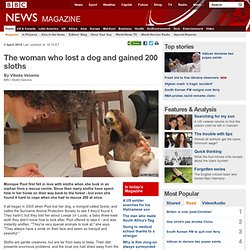 Since then many sloths have spent time in her home on their way back to the forest - but even she found it hard to cope when she had to rescue 200 at once. It all began in 2005 when Pool lost her dog, a mongrel called Sciolo, and called the Suriname Animal Protection Society to see if they'd found it. They hadn't, but they told her about Loesje (or Lucia), a baby three-toed sloth they didn't know how to look after. Pool offered to take it - and was instantly smitten. Sloths are gentle creatures, but are far from easy to keep. Pool sought advice from Judy Arroyo at the famous sloth sanctuary in Costa Rica, who told her she must feed Loesje goat's milk - cow's milk would be fatal.

Loesje had a surprise in store - she turned out to be a "he". Soon Pool became the go-to woman for sloths in Suriname. Slothified (adj.) 1. 2.