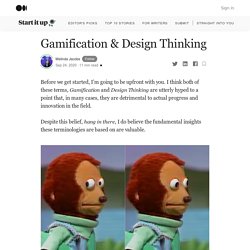 I think both of these terms, Gamification and Design Thinking are utterly hyped to a point that, in many cases, they are detrimental to actual progress and innovation in the field. Despite this belief, hang in there, I do believe the fundamental insights these terminologies are based on are valuable. Hype is a double-edged sword. Hype can be necessary to push forward meaningful concepts into the mainstream. Haunted by the Past: The Nostalgic Future of “Cyberpunk 2077” Why all great games need a product vision. Game studios all too often find themselves stuck in the same situation: Production should be underway, but the dev team is still somewhere in discovery mode. 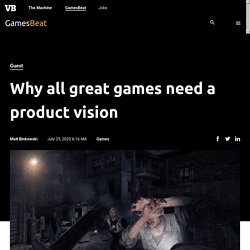 Rather than execution and content-build being in full flow, time is being spent debating over fundamental questions that should have been answered at the start. What is the game actually about? Why is it unique? 25 Usability terms every UX designer should know. Add these terms to your designer toolbox Usability and User Experience cannot be separated. 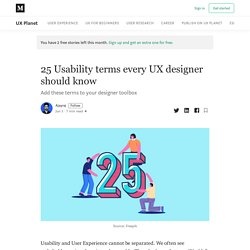 We often see stakeholders using them interchangeably. They don’t use the term “Usable” directly, but whatever they refer is closely associated with the usability of the product. Learning these usability terms will be helpful especially for the new designers to create a shared understanding among the team members. It will also enable the stakeholders to provide proper and constructive feedback instead of vague and not so helpful ones. 25 Cognitive Biases every UX Designer should know. Bias is everywhere. 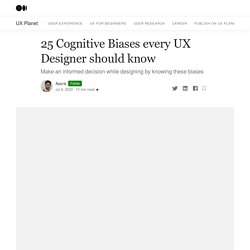 The 3 indispensable elements of successful Gamification. In the above scenario, the Travel Consultants working at travel agencies in India are mostly young people between 19–26 years old, with low barriers to entry, not all candidates are with degrees in travel and tourism or passionate travelers. 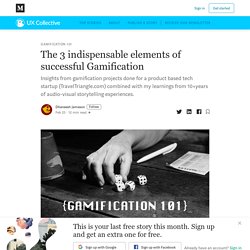 With no standard scale for their salaries(usually low), they are motivated by sales incentives, material gifts, and career certificates. Considering the players are progressing through new virtual and reactive circumstances within the game, the response we design to their actions needs to follow a consistent pattern of language. Such consistency is usually brought through conscious ‘conditioning’ and they alter players’ decision making based on their behavior and its consequences. This is when game challenges are used to condition their behaviors. Designing the right permutation and combination of challenges becomes another important aspect of a successful gamification project. Tips to boost your gamification-storytelling. Gamification in HR: Hit or miss? Scott Beagrie, December 31, 2018 Gamification has been around for some time now, so where has it proved a useful tool in HR and where has it been over-hyped? 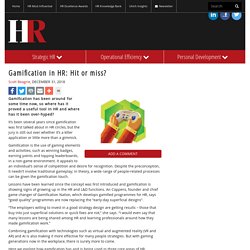 It’s been several years since gamification was first talked about in HR circles, but the jury is still out over whether it’s a killer application or little more than a gimmick. Gamification is the use of gaming elements and activities, such as winning badges, earning points and topping leaderboards, in a non-game environment. It appeals to an individual’s sense of competition and desire for recognition. Despite the preconception, it needn’t involve traditional gameplay; in theory, a wide range of people-related processes can be given the gamification touch. Gamasutra: Josh Bycer's Blog - How to Break Down Game Design. 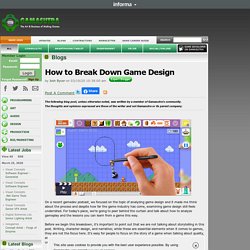 Paul Gadi's Blog - Decentralizing Video Games - An Introduction. The following blog post, unless otherwise noted, was written by a member of Gamasutra’s community. 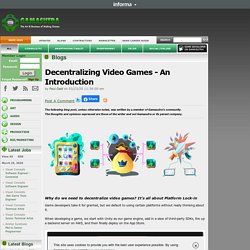 The thoughts and opinions expressed are those of the writer and not Gamasutra or its parent company. Why do we need to decentralize video games? It's all about Platform Lock-in Game developers take it for granted, but we default to using certain platforms without really thinking about it. When developing a game, we start with Unity as our game engine, add in a slew of third-party SDKs, fire up a backend server on AWS, and then finally deploy on the App Store. What is eLearning Gamification? - World Wire. Before starting this article, you should understand what you are reading and what’s this article is all about—so starting with a basic question that comes in everyone’s mind when they are about to read or know something. 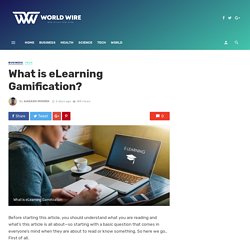 So here we go.. First of all. Gamification is a simple process that helps to produce significant results. 10 Frustrating Design Choices In Difficult Games. Difficult games have become very popular over the years. 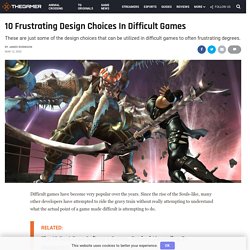 Since the rise of the Souls-like, many other developers have attempted to ride the gravy train without really attempting to understand what the actual point of a game made difficult is attempting to do. RELATED: The 10 Best FromSoftware Games, Ranked (According To Metacritic) A difficult game these days isn’t usually meant to be hard for the sake of being hard. The hidden value of video game main menus, and the design secrets that compel you to hit play.

Anyone who's ever been on a date or interviewed for a job doesn't need reminding about the importance of first impressions, but they hold even more purchase over human interaction than we might think. Psychologists have discovered, for instance, that humans are fickle enough to develop fully formed judgements about a complete stranger based on the first word to come out of their mouths. If we're that myopic when it comes to making initial observations about other people, then why wouldn't the same thing apply to video games? Subscribe to read. The Original Super Mario Bros. is a Master Class in Game Design. Hot on the heels of our dive into The Legend of Zelda franchise, we now jump, stomp, and dive into the most iconic and popular video game franchise ever, the Super Mario Bros. series. Each week, we’ll take a unique look at each game in the series, and discuss aspects you may not have considered.

First off, naturally, is the original Super Mario Bros. for the NES. Stephen Trinh's Blog - The Talos Principle - Designing for Player Error. The following blog post, unless otherwise noted, was written by a member of Gamasutra’s community. The thoughts and opinions expressed are those of the writer and not Gamasutra or its parent company. Player errors are important. Much of game design is making decisions about error space. Player Killing created a "toxic environment" in Amazon MMO New World.

The developer of Amazon MMO New World has fundamentally changed the way player versus player works in the game after it struggled to find a solution for Player Killing. In a post on the New World subreddit, a rep for Amazon Game Studios outlined concerns in the community about the impact of PvP on the player experience during alpha. Previously, PvP was full loot and open world, with only outposts offering sanctuary. This meant everyone was vulnerable to attack at any time from players in the rest of the world. To attack, you flagged criminal intent. If you died as a criminal you'd lose all your gear and inventory.

It seems some players had their fun with this system, with high-level players killing low level players a lot - "sometimes exclusively", Amazon said. Herman Tulleken's Blog - Avoid these 50 mistakes when you make an advergame. 10 Video Game Design Rules You Can Never Unsee. Game Design Is Not for the Faint of Heart. Lori Ann Cole and her husband Corey Cole are the creators of the Quest for Glory series of computer games, which were published by Sierra from 1989 to 1998. Culture - Every story in the world has one of these six basic plots. Cartamundi unveils game design product The White Box. Masterminded by game pioneers, The White Box give budding game designers the tools to design their own games. Video Games Are Better Without Stories - The Atlantic. A longstanding dream: Video games will evolve into interactive stories, like the ones that play out fictionally on the Star Trek Holodeck.

The Entertainment Software Association (ESA) recently interviewed Ian Bogost, Ivan Allen College Distinguished Chair in Media Studies and professor of interactive computing at the Georgia Institute of Technology, to gather his insights on video games. Gamification - All Fun and Games Until Someone Loses the Point. How To Balance An RPG.

Metrics 2.0: Video Game Addiction: 81% of American Youth Play; 8.5% are Addicted. Reports from around the world suggest that gaming addiction is real and on the rise. With nearly 8 in 10 American youth (81%) playing video games at least one time per month, including 94% of all boys playing, this certainly raises concerns about video game addiction. Intuition vs Metrics: How Social Game Design Has Evolved. History of Social Games. Social games aren’t new–they’re just games you play with other people. Social games began about 5000 years ago. Playfulness, Seriousness and Gamification. Interview: Andrew Doull on Procedural Games. Devin Becker's Blog - 10 Things Corman Taught Me About Indie Game Development.

Cary Chichester's Blog - Tutorials of Zelda: When Do Players Get to "Play"? The # gamedesign Daily.