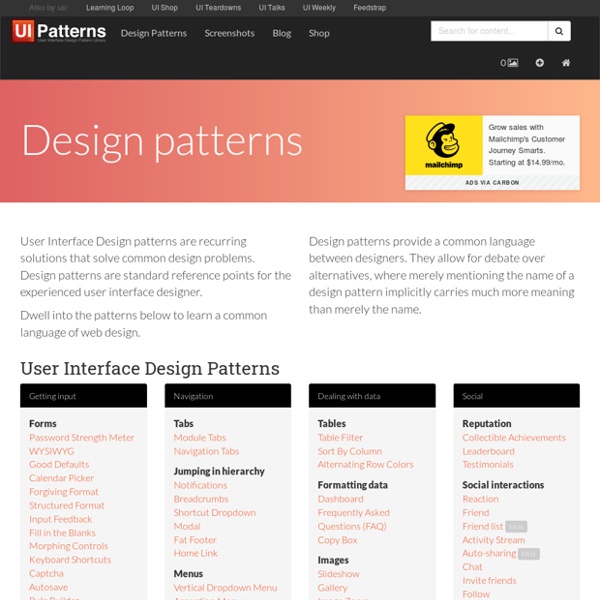 Web Culture: Grid-based Layout Designs The semantic web has brought on a new generation of Internet technology. As designers and developers work together to redefine the rules of the web, the number of open-source projects and third-party APIs continues to grow. The opinions of web scholars differ on the use of grid systems. Many argue that setting grid points limits the creativity of designers. 5 Tips To Improve Your Design Skills It doesn’t matter how good you are today. What really matters is how fast you progress and what steps you take every day to improve your design skills. Recently, I tried to sum up my last several years of being a graphic designer in order to discover what really brought me to the level I’m at today. Nothing happens overnight. It takes a countless number of hours, plus practice and patience.

A better Photoshop grid for responsive web design Posted on 20 January 2012 • 90 comments In making the move to responsive web design, one of the potential hurdles is the rather awkward maths for calculating the percentage-based widths necessary for fluid layouts. If, for example, you’re designing with a 960px grid in Photoshop and you have six columns, each 140px wide, you divide 140 by 960 to get your percentage-based width: 14.583333%. Now, I don’t know about you, but numbers like that look a little scary. It doesn’t matter that there are great calculation tools built into TextMate to do the maths for you; the point is that the final figure looks like an arbitrary number with no immediate relation to either the container’s pixel width (960) or the element’s pixel width (140).

Designers checklist advices — Project by Adrien Heury 06/07Build your portfolio & your client base Brijan PowellDesigner • Rally interactive • SLC As I mentioned earlier, posting your work on as many different networks as possible really does get your name and your work out to more than just other designers. Many designers I know get a lot of business inquiries from people who have seen their work on the previously mentioned design communities. Also mentioned above is the fact that your work should be your very best every time. Don't get lazy.

Less Framework 4 I called Less Framework "a CSS grid system for designing adaptive websites". It was basically a fixed-width grid that adapted to a couple of then popular screen widths by shedding some of its columns. It also had matching typographic presets to go with it, built with a modular scale based on the golden ratio. The resources it was originally published with are still available on GitHub. Contrary to how most CSS frameworks work, Less Framework simply provided a set of code comments and visual templates, instead of having predefined classes to control the layout with.

Less Framework 4 Every layout in Less Framework is based on a single grid, composed of 68 px columns with 24 px gutters. The only measures that change from layout to layout are the amount of columns and the width of the outer margins. The three sets of typography pre­sets are aligned to a 24 px baseline grid; one is based on 16 px body text, one on 17 px, and one on 18 px. Both sets contain several harmonious type sizes calculated using the Golden Ratio. Technically The idea is to first code the Default Layout (992 px), and then use CSS3 media queries to code seve­ral child layouts: 768, 480, and 320 px.

Designing With Grid-Based Approach Advertisement The main idea behind grid-based designs is a solid visual and structural balance of web-sites you can create with them. Sophisticated layout structures offer more flexibility and enhance the visual experience of visitors. In fact, users can easier follow the consistency of the page, while developers can update the layout in a well thought-out, consistent way. Create a Mobile App Icon in Photoshop This tutorial is part of a three-part series explaining how to design UI elements for mobile applications in Photoshop. In this part, we will explain how to design an icon for your mobile device's home screen. Let's get started!

50 Free UI and Web Design Wireframing Kits, Resources and Source Files Advertisement Planning and communication are two key elements in the development of any successful website or application. And that is exactly what the wireframing process offers: a quick and simple method to plan the layout and a cost-effective, time-saving tool to easily communicate your ideas to others. Ultimate Guide to Website Wireframing By Cameron Chapman Most designers wireframe their designs in one way or another, even if it just involves them making quick sketches on the back of some scratch paper. Wireframing is an important part of the design process, especially for more complex projects. Wireframes can come in handy when you’re communicating with clients, as it allows them to visualize your ideas more easily than when you just describe them verbally. This guide covers what you need to know about website wireframes to get started. Why You Should Wireframe Your Web Designs