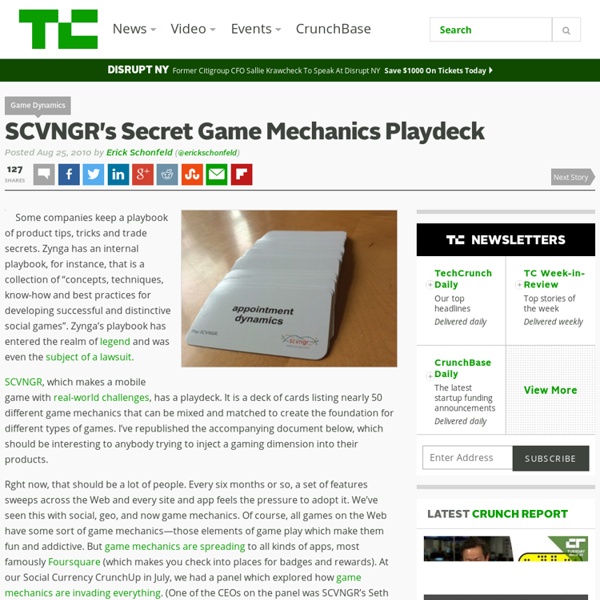 Some companies keep a playbook of product tips, tricks and trade secrets. Zynga has an internal playbook, for instance, that is a collection of “concepts, techniques, know-how and best practices for developing successful and distinctive social games”. Zynga’s playbook has entered the realm of legend and was even the subject of a lawsuit. SCVNGR, which makes a mobile game with real-world challenges, has a playdeck. It is a deck of cards listing nearly 50 different game mechanics that can be mixed and matched to create the foundation for different types of games. I’ve republished the accompanying document below, which should be interesting to anybody trying to inject a gaming dimension into their products. Rght now, that should be a lot of people. SCVNGR’s playdeck tries to break down the game mechanics into their constituent parts. SCVNGR Game Dynamics Playdeck 1. Definition: A virtual or physical representation of having accomplished something. 2. 3. 4. 5. 6. 7. 8. 9. 10. 11. 12. 13. 14. Related:  Game Design Patterns • Ludificació

Everything I Learned About Game Design I Learned From Disneyland As promised, here are the slides from my GDC talk. We had a "sold out" crowd and I got to meet lots of nice people after the talk. Please share these with your friends and co-workers. Meta-Game Design: Reward Systems that Drive Engagement One of the hottest topics in the Web-meets-Gaming world is metagame design -- the practice of applying game-like reward and feedback systems to non-game applications for the purpose of driving loyalty and engagement. In the physical world, we're surrounded by metagames: Karate belts, scout badges, employee incentive plans, and frequent flyer miles are all reward systems, layered onto an existing activity to drive loyalty and communicate social status. On the Web, metagames peform a similar function. Social networks like MyYearBook and Hi5 let players earn redeemable points by logging in and engaging in various social activities. Foursquare uses points, badges and leaderboards to turn club-hopping into a game-like social experience. In this design-focused talk, you'll learn about the three levels of metagame design -- points tables, feedback and rewards, and viral outreach -- and the key questions to answer at each level.

Game mechanics Game mechanics are constructs of rules intended to produce a game or gameplay. All games use mechanics; however, theories and styles differ as to their ultimate importance to the game. In general, the process and study of game design, or ludology, are efforts to come up with game mechanics that allow for people playing a game to have an engaging, but not necessarily fun, experience. Game mechanics vs. gameplay[edit] Gameplay refers to the overall game experience or essence of the game itself. There is some confusion as to the difference between game mechanics and gameplay. For example, the basic gameplay of a shooting or fighting game is to hit while not being hit. However, from a programming or overall design perspective, basic gameplay can be deconstructed further to reveal constituent game mechanics. Game mechanics vs. theme[edit] Games that are mechanically similar can vary widely in theme. Turns[edit] Even in real-time computer games there are often certain periodic effects.

Game Design : The Addiction Element What makes a game addictive? In order for a game to become addictive there must be a driving force to keep playing the game. Some reasons behind this are: to finish the game, to compete against others, to master the game's control and interface, to explore the game and getting a high score or equivalent. Addiction of Finishing the Game An addiction to finish the game is often based on either wanting to see the end result or just to complete it. In the case where a player finishes a game to see how it ends, there is a story motivation. Addiction of Competition The addiction of competing against others is a powerful one and can keep a game alive and thriving for incredibly long periods of times. Addiction of Mastery The addiction of mastery of a game or its control is also extremely powerful. Addiction of Exploration The addiction of exploration has been in computer games since the beginning. Addiction of the High Score Another type of high score addiction is over winning a game.

Game Design, Psychology, Flow, and Mastery - Articles - Fail-safes in Competitive Game Design: A Detailed Example I'd like to take an in-depth look at an example of designing balance into a game through the use of fail-safes. Although I'm choosing a fighting game, the lessons should apply to many types of games. I'll go into some excruciating, genre-heavy details, but I think that's necessary to give the full force of what's really going on here. Welcome to MvC2, don't even ask.Some games end up balanced through sheer coincidence, such as the fighting game Marvel vs. Capcom 2, which is "accidentally a very good game." The hero of our story, the oddly named Guilty Gear XX (ggxx), had quite a different genesis. Each character in Guilty Gear XX plays very differently. 1) has a game system that gives all characters equal access to an unusually large number of safeguards and shared defensive abilities and2) each character has some set of unique abilities that stray further from the standard template than they would in most other fighting games. "f+p" invulnerability. Super Meter. Roman Cancel (rc).

Game Design, Psychology, Flow, and Mastery - Articles - Slippery Slope and Perpetual Comeback If a game has slippery slope, it means that falling behind causes you to fall even further behind. For example, imagine that every time your team scored in basketball that the opponent’s team lost a player. In that game, falling behind is doubly bad because each basket counts for score AND it makes the opposing team less able to score points of its own. The actual game of basketball does not have this screwy feature though, so real basketball does not have slippery slope. Slippery slope is another name for positive feedback, a loop that amplifies itself as in a nuclear reaction. Slippery slope is usually a bad property in a game. StarCraft and Chess do have slippery slope. This is why there are a lot of forfeits in Chess. This guy just lost a Chess piece. StarCraft also has slippery slope. In basketball, the score is completely separate from the gameplay. StarCraft has even more severe slippery slope when it comes to the game’s economy. Fighting Games Limited Slippery Slope Conclusion

Blog de Gamifica.Me Game Design, Psychology, Flow, and Mastery - Articles - Yomi Layer 3: Knowing the Mind of the Opponent This is not really how Yomi works.Yomi is the Japanese word reading, as in reading the mind of the opponent. If you can condition your enemy to act in a certain way, you can then use his own instincts against him (a concept from the martial art of Judo). Paramount in the design of competitive games is the guarantee to the player that if he knows what his enemy will do, there is some way to counter it. What happens, though, when your enemy knows that you know what he will do? He needs a way to counter you. He's said to be on another level than you, or another "Yomi Layer." Sound like a joke that could never happen in real gameplay of an actual game? Before we get into how ordinary human minds can become entangled in complicated guessing games, let's look at what needs to be there to create these guessing games at all. Let's say I have a move (we'll call it "m") that's really, really good. Now you don't know what to expect from me anymore. You don't have adequate choices yet. In summary,

Game Design Concepts | An experiment in game design and teaching Game Design, Psychology, Flow, and Mastery - Articles - Rock, Paper, Scissors in Strategy Games A simple rock, paper, scissors (RPS) system of direct counters is a perfectly solid and legitimate basis for a strategy game provided that the rock, paper, and scissors offer unequal risk/rewards. Better still is if those rewards are unclear, meaning that players cannot easily determine the exact values of the rewards. The following video is not an example of that, but it's pretty exciting looking. An Example of $10/$3/$1 Consider a strictly equal game of RPS with clear payoffs. Now consider the same game of RPS with unequal (but clearly defined) payoffs. That may have all sounded like double-talk, but it's Yomi Layer 3 in action. Math Says There is a Solution I'd like to meet Ms. You might say that even with unequal payoffs, there's still an optimal way to play. You should play rock 10/14ths of the time, scissors 3/14ths, and paper 1/14th. While that is the math answer, three related factors creep into the real-world application of that strategy: Fighting Games Unclear Payoffs RPS in RTS

The 4 Keys 2 Fun | Nicole Lazzaro's Blog Emotion and the Fun of Games As experts in player experiences we see a huge gap between “market research” and what players most enjoy about play. Players may check “good graphics” on a online survey, but our cross-genre contextual research reveals a more interesting story. We know how games deliver more emotions than frustration, excitement, and fear. The secret is in the gameplay. The 4 Fun Keys create games’ four most important emotions 1. Hard Fun: Fiero – in the moment personal triumph over adversity 2. These four main reasons why people play games are how best sellers create more emotions for more captivating play. Nicole Lazzaro, President, of XEODesign,® Inc. has shared the insights and analysis from XEODesign’s independent player research with the game development and human-computer interaction communities. The 4 Fun Keys create emotion from interaction in productivity software as well as games.