The Two Types of Random. How to grow as a designer: What to read, where to get ideas, and knowing thyself. Less experienced designers often ask for book recommendations. 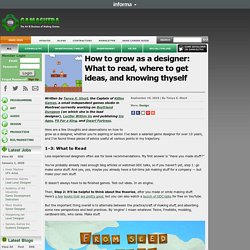 My first answer is “Have you made stuff?” You’ve probably already read enough blog articles or watched GDC talks, so if you haven’t yet, step 1: go make some stuff. And yes, yes, maybe you already have a full-time job making stuff for a company — but make your own stuff. It doesn’t always have to be finished games. Test out ideas. Then, Step 2: it’ll be helpful to think about the theories, after you made or while making stuff.

But the important thing overall is to alternate between the practice/craft of making stuff, and absorbing some new perspectives and best practices. Once that gets comfortable, Step 3: actually finish something. I find alternating between creating and reading/discussing the best rhythm. Aspiring designers usually play lots of games. What am I feeling? Design in Depth at Supercell: Why Great Ideas Aren't Enough. PRACTICE 2018: Zak McClendon. Why Fashion in (Most) Games Sucks, and Why You Should Care. The Challenge of Cameras. TRIAGE NEEDED.

Level Design. Narrative Design. UX. Player Engagement / Motivation. How to be a Better Game Designer. As a final bit of advice, here are some lessons I have learned about working with different disciplines. 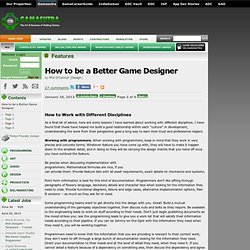 I have found that these have helped me build a good relationship within each "culture" in development, understanding the work from their perspective goes a long way to earn their trust and professional respect. Working with programmers. Junior Designers vs. Senior Designers — The Year of the Looking Glass. What makes a good game designer? Oscar Clark looks at the different types of designer and the key aspects of the game they need to understand After my recent Masterclass at UKIE one of the attendees, Arran Topalian, a game designer at Rare, asked me ‘What makes a good designer?’. 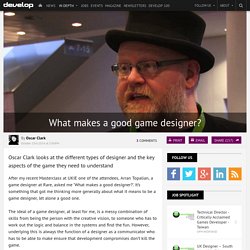 It’s something that got me thinking more generally about what it means to be a game designer, let alone a good one. The ideal of a game designer, at least for me, is a messy combination of skills from being the person with the creative vision, to someone who has to work out the logic and balance in the systems and find the fun. However, underlying this is always the function of a designer as a communicator who has to be able to make ensure that development compromises don’t kill the game. Despite that, when I’ve worked with teams of designers either directly or as a consultant, their remit never seems to be quite the same. Design education is "tragic", says Jonathan Ive. News: Apple's head designer Jonathan Ive says he struggles to hire young staff as schools are failing to teach them how to make products. 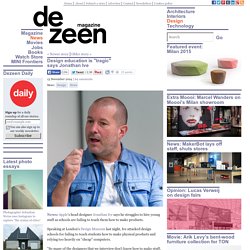 Speaking at London's Design Museum last night, Ive attacked design schools for failing to teach students how to make physical products and relying too heavily on "cheap" computers. Neil Sorens's Blog - God As Game Designer. The following blog post, unless otherwise noted, was written by a member of Gamasutra’s community. 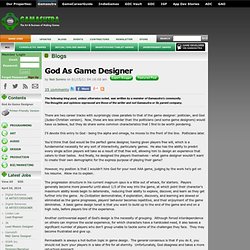 The thoughts and opinions expressed are those of the writer and not Gamasutra or its parent company. There are two career tracks with surprisingly close parallels to that of the game designer: politician, and God (Judeo-Christian version). Now, these are less similar than the politicians (and some game designers) would have us believe, but they do share some common characteristics that I find to be worth pondering. I'll devote this entry to God - being the alpha and omega, he moves to the front of the line. Politicians later. You'd think that God would be the perfect game designer, having given players free will, which is a fundamental necessity for any sort of interactivity, particularly games. 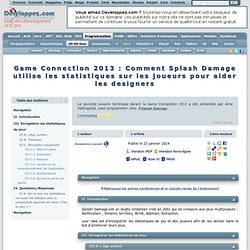 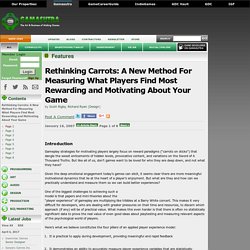 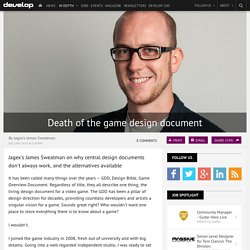 Regardless of title, they all describe one thing; the living design document for a video game. What Games Are: Is Formal Game Design Valuable? Editor’s note: Tadhg Kelly is a consultant game designer and creator of leading game design blog What Games Are. 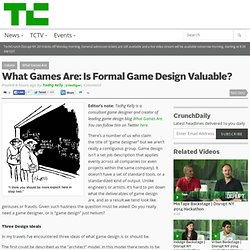 You can follow him on Twitter here. There’s a number of us who claim the title of “game designer” but we aren’t really a contiguous group. Game design isn’t a set job description that applies evenly across all companies (or even projects within the same company). SINFO 24 - Chelsea Howe (Creative Designer and Producer @ Owlchemy Labs)

The 4 Fs of Game Design:Fail Faster, and Follow the Fun - ye olde darklorde. [ From the Dec 2012 issue of Game Developer Magazine. ] 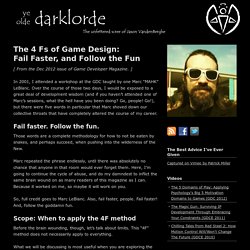 How CD Projekt Red made crafting work with Witcher 3's dynamic economy. Much has been made of The Witcher 3: Wild Hunt's open-world design, but less attention has been paid to its intriguing crafting system and how well (or not) it ties into the game’s dynamic economy. At GDC Europe in Cologne today CD Projekt Red senior gameplay designer Matthew Steinke said his dream in designing the economy of Wild Hunt was to create “a gameplay mechanism to bind the world together,” but the reality of doing so proved difficult. “Money isn’t want the player actually wants,” said Steinke. Much like in the real world, it’s only a method of measuring value and attaining things the player wants — more powerful gear, certainly, but also vitality (through the purchase of food and healing items) and character progression (by turning items in for quests, or buying items to make difficult quests easier.)

Learn to love spreadsheets “I may be preaching to the choir here, but…learn to love spreadsheets," says Steinke. Creative Spark: Dustin Lance Black. Ask a Game Dev — Getting up from the Armchair. Understanding Gameplay – Part two: Technique. In the previous article, we’ve looked at gameplay from the perspective of a symbolic system that proposes abstract problems to players, and that requires structuring norms while allowing for variation and uncertainty. I commend you if you survived through part one and its heavy-handed theories, now is the time to explore this approach and see how it can inform the technique of game design. Gameplay principles Mel Brook’s 15 commandments Symbolic systems work within the constraints of high level rules. Like music function with harmonics and rhythmic scales, gameplay should also have its own set of governing principles.

Fairness: Each player (or starting position) should have equivalent chances to win, or roughly equal. Understanding Gameplay – Part One: Definitions. Just like fun, gameplay is a word that always felt awkward to me. Five Principles of Writing for Users. Writing for users is a deeply intuitive and technical trade. As with web design, digital writing needs to resolve the user’s existing knowledge and instincts with an interactive product. Digital writing encompasses elements of content strategy: building information architectures, determining content requirements, and finding ways to solve UX problems with things like videos and tools. Our job is to model, structure, and create information.

With that in mind, let’s take a look at some principles that underpin and define how we should write for users. 1. The words you use need to be as easy to understand as a green light—at least, this is the goal. Brice Morrison's Blog - Introduction to the Game Design Canvas. The following blog post, unless otherwise noted, was written by a member of Gamasutra’s community. The myth of perfect design. Optimal (adj) : the most desirable measurable outcome possible under a restriction expressed Perfection in design is not possible. You can never simultaneously satisfy all possible objectives. A ballpoint pen is an excellent tool for writing, until you need to erase. Reaching Perfection: Forge Lessons.

Forge Lessons is a series devoted to teaching readers about the inner workings of level design. It involves the tips and tricks of the trade that allow pro designers to get a step ahead. Spector: Go emergent - game design is not all about you. A single game as a lifelong hobby. Do you finish one game and then move onto the next?