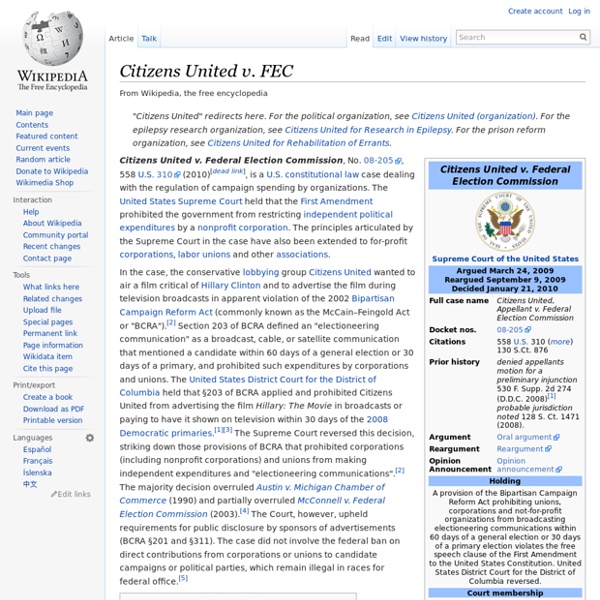 Citizens United v. Federal Election Commission, No. 08-205, 558 U.S. 310 (2010)[dead link], is a U.S. constitutional law case dealing with the regulation of campaign spending by organizations. The United States Supreme Court held that the First Amendment prohibited the government from restricting independent political expenditures by a nonprofit corporation. The principles articulated by the Supreme Court in the case have also been extended to for-profit corporations, labor unions and other associations. Background[edit] The complainant alleged that the release and distribution of FAHRENHEIT 9/11 constituted an independent expenditure because the film expressly advocated the defeat of President Bush and that by being fully or partially responsible for the film's release, Michael Moore and other entities associated with the film made excessive and/or prohibited contributions to unidentified candidates. Before the Supreme Court[edit] Opinions of the Court[edit] Overview[edit]

Richest 1% may own half of global wealth by 2016 The combined wealth of the world's richest 1 percent could overtake that of the other 99 percent by 2016 , according to a report by Oxfam published Monday, as billionaires, politicians and business leaders gather in Davos for the annual World Economic Forum. In a study called "Wealth: Having it all and wanting more." the international charity warned that a sharp rise in inequality was holding back the fight against global poverty at a time when 1 in 9 people do not have enough to eat and more than a billion people live on less than $1.25 a day. © Provided by CNBC Of the remaining 52 percent of global wealth in 2014 , about 46 percent was owned by the rest of the richest fifth of the world's population.

Santa Clara County v. Southern Pacific Railroad Santa Clara County v. Southern Pacific Railroad Company, 118 U.S. 394 (1886) was a matter brought before the United States Supreme Court – but not decided by the court – which dealt with taxation of railroad properties. A report issued by the Court Reporter claimed to state the sense of the Court – without a decision or written opinions published by or of the Court. This was the first time that the Supreme Court was reported to hold that the Fourteenth Amendment equal protection clause granted constitutional protections to corporations as well as to natural persons, although numerous other cases, since Dartmouth College v. Woodward in 1819, have recognized that corporations were entitled to some of the protections of the Constitution. In the opinion, the Court consolidated three separate cases:

Supreme Court Blocks Ban on Corporate Political Spending The 5-to-4 decision was a vindication, the majority said, of the First Amendment’s most basic free speech principle — that the government has no business regulating political speech. The dissenters said that allowing corporate money to flood the political marketplace would corrupt democracy. The ruling represented a sharp doctrinal shift, and it will have major political and practical consequences. Specialists in campaign finance law said they expected the decision to reshape the way elections were conducted. Though the decision does not directly address them, its logic also applies to the labor unions that are often at political odds with big business.

Leaked: The Oil Lobby's Conspiracy to Kill off California's Climate Law You remember Fillmore. He’s the resident hippie of Radiator Springs in the Pixar blockbuster Cars. Much to the chagrin of his neighbor, Sarge the Army Jeep, Fillmore greets each new day with Jimi Hendrix’s Woodstock rendition of A Star Spangled Banner—“respect the classics, man”—and is quick with a conspiracy theory about why biofuels never stood a chance at America’s gas pumps.

How A Wealthy, Clean-Cut ‘Duck Dynasty’ Tricked The World For Publicity In the wake of the recent homophobia and racism scandals surrounding A&E’s popular so-called “reality” show Duck Dynasty, there is an important, little-known detail that should be remembered: it’s all fake… all of it. Sources close to the show have time and time again leaked details that the show is literally scripted. Because of non-disclosure agreements, cameramen, and others who wish to go public with this information have proven unable to do so. As a result, without a name attached to such leaked information, many of these claims of inauthenticity are seen as lacking credibility. But as the saying goes, “a picture is worth a thousand words.”

Campaign Finance Reform In the United States, candidates for public office have always needed money to run for public office. To get it they have often depended on wealthy contributors expecting favors in return. In 1971, the federal government passed the Federal Election Campaign Act (FECA), in an attempt to combat this phenomenon. The FECA (which was amended several times until 1979) put a cap on the amount a single donor could contribute to a campaign for federal government, and required public disclosure of these contributions. But the landmark 1976 Supreme Court ruling, Buckley v. Valeo undid a portion of these reforms. 1976, Buckley v. Valeo, wikipedia Buckley v. Valeo, 424 U.S. 1 (1976), was a case in which the Supreme Court of the United States struck down several provisions in the 1974 Amendment to a law that limited campaign expenditures, independent expenditures by individuals and groups, and expenditures by a candidate from personal funds. It introduced the idea that money counts as speech, and eliminated any previous restraints on unlimited spending in US election campaigns. The Court upheld the provision which sets limits on individuals' campaign contributions. Facts[edit]

Where the 1% of the 1% money goes In the 2012 election 28 percent of all disclosed political contributions came from just 31,385 people. In a nation of 313.85 million, these donors represent the 1% of the 1%, an elite class that increasingly serves as the gatekeepers of public office in the United States. This graphic is part of Sunlight's series on the Political '1% of the 1%' in 2012. Soaring generic drug prices draw Senate scrutiny WASHINGTON — Some low-cost generic drugs that have helped restrain health care costs for decades are seeing unexpected price spikes of up to 8,000 percent, prompting a backlash from patients, pharmacists and now Washington lawmakers. A Senate panel met Thursday to scrutinize the recent, unexpected trend among generic medicines, which usually cost 30 to 80 percent less than their branded counterparts. Experts said there are multiple, often unrelated, forces behind the price hikes, including drug ingredient shortages, industry consolidation and production slowdowns due to manufacturing problems. But the lawmakers convening Thursday's hearing said the federal government needs to play a bigger role in restraining prices. "If generic drug prices continue to rise then we are going to have people all over this country who are sick and need medicine and who simply will not be able to buy the medicine they need," Vermont Sen.

The ‘Citizens United’ decision and why it matters By now most folks know that the U.S. Supreme Court did something that changed how money can be spent in elections and by whom, but what happened and why should you care? The Citizens United ruling, released in January 2010, tossed out the corporate and union ban on making independent expenditures and financing electioneering communications. Justices OK dumping mine waste into Alaskan lake - latimes WASHINGTON — The Supreme Court gave its approval Monday for waste from a gold mine in Alaska to be drained into a mountain lake, dealing environmentalists their fifth defeat this court term and lobbing another controversial Bush administration policy into President Obama's lap. The 6-3 ruling upheld a decision by the George W. Bush administration to label the planned drainage from Alaska's reopened Kensington mine as "fill" rather than pollution.

Obama's executive action on immigration will have big repercussions on states As Republicans in Washington debate how to fight Obama’s executive action, the real battle could take place in state legislatures that have a say over how exactly to carry out the plan. For starters, states will have to provide proper outreach and support to help the immigrants figure out how to apply for deferred action – and state governments can vary their efforts in reaching out to undocumented populations offering assistance. An estimated 3.7 million undocumented immigrants who are parents of U.S. citizens or legal permanent residents are expected to benefit from Obama’s new deferred action program. An additional 1.5 million people will be eligible for temporary deportation relief and work permits under the expansion of Obama’s 2012 Deferred Action for Childhood Arrivals Program or DACA.