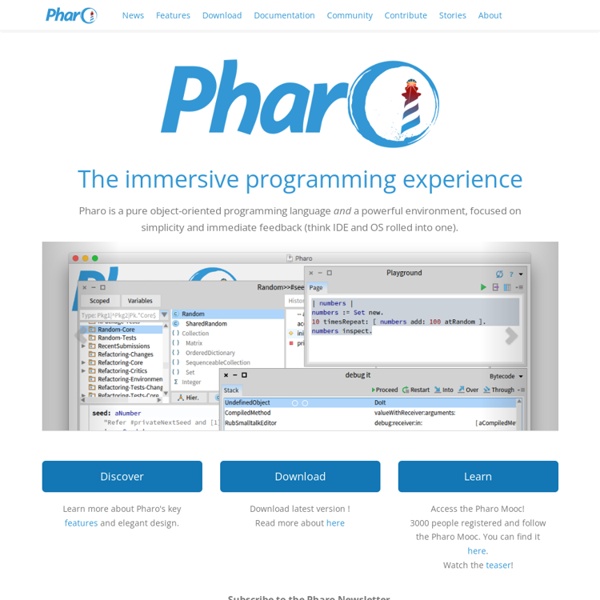 Hugs 98 Note: Hugs is no longer in development. The content on these pages is provided as a historical reference and as a resource for those who are still interested in experimenting with or otherwise exploring the system. Hugs 98 is a functional programming system based on Haskell 98, the de facto standard for non-strict functional programming languages. Hugs 98 provides an almost complete implementation of Haskell 98, including: Lazy evaluation, higher order functions, and pattern matching. Enjoy!

Is Smalltalk a secret rock star in the programming languages world? | Joachims Small World So you thought Amber and Redline Smalltalk were the latest Smalltalk derivatives out there? Wrong. Every week or so, somebody somewhere comes up with a new programming language. A lightweight, image based, encapsulated development environment based around Smalltalk, specifically, “A Little Smalltalk” version 3.0 by Timothy A. Martin McClure’s Mist project Mist is a project to create a Smalltalk dialect (or possibly a very Smalltalk-like language) that is implemented without a virtual machine, is implemented without depending on any other language, is simple, and is reasonably fast. Minori Yamashita’s LittleSmallScript Little Smallscript is a dialect of Smalltalk that compiles into JavaScript. So what is it that makes people always come back to a programming language that is going to celebrate its 30th birthday of its publication next year? My personal theses here are: Like this: Like Loading... Related Smalltalk Teaching fun In "UnorderedCollection" In "Smalltalk"

Linguagem Potigol by potigol Girls Who Code Girls Who Code works to close the gender gap in technology. Our free programs educate, inspire, and equip girls to pursue opportunities in technology. | Free Summer Programs & Clubs Welcome to Python.org Newspeak PH7 Engine The Languages And Frameworks You Should Learn In 2016 Martin Angelov A lot happened in the software development world in 2015. There were new releases of popular programming languages, new versions of important frameworks and new tools. You will find a short list of the new releases that we think are the most important below, together with suggestions for the things we believe would be a great investment of your time to learn in 2016. The Trends Shift from the backend to the frontend In the last few years, there has been a trend towards shifting the business logic of web apps from the backend to the frontend, with the backend being delegated to a simple API. Quick browsers releases Another significant advancement for the web as a platform in 2015 was the release of the Edge web browser. The death of Flash It has finally happened! Languages and Platforms Python 3.5 was released this year with a lot of new features like Asyncio, which gives you a node.js-like event loop, and type hints. Swift 2 was released earlier this year. JavaScript Frameworks

Alice.org Polyglot extensible compiler framework Polyglot is a highly extensible compiler front end for the Java programming language. It is implemented as a Java class framework using design patterns to promote extensibility. Using Polyglot, language extensions can be implemented without duplicating code from the framework itself. Polyglot has been used to implement domain-specific languages, to explore language design ideas, to simplify Java for pedagogical purposes, and for various code transformations such as optimization and fault injection. Polyglot has been used for both major and minor language extensions; our experience suggests that the cost of implementing an extension scales well with the degree to which it modifies Java. Polyglot compiles and runs on (at least) Linux, Solaris, Windows, and Mac OS X. Polyglot supports Java 1.4, Java 5, and Java 7, including features such as generics and annotations.

Download Swift Latest Development Snapshots Development Snapshots are prebuilt binaries that are automatically created from mainline development branches. These snapshots are not official releases. They have gone through automated unit testing, but they have not gone through the full testing that is performed for official releases. Swift is covered by the Swift License at swift.org/LICENSE.txt. Apple Platforms Xcode includes a release of Swift that is supported by Apple. Playgrounds are not currently supported for downloadable Swift packages. To submit to the App Store you must build your app using the version of Swift that comes included within Xcode. Requirements for Tools OS X 10.11 (El Capitan) Xcode 7.2 (including prerelease versions) Supported Target Platforms OS X 10.9.0 or later iOS 7.0 or later watchOS 2.0 or later tvOS 9.0 or later Installation Download the latest package release. Code Signing on OS X Linux Requirements Ubuntu 14.04 or 15.10 (64-bit) Active Signing Keys