Do vaccines protect against long COVID? What the data say. Physiotherapist David Putrino’s neurological rehabilitation clinics used to treat about 50 people each week with conditions such as chronic pain, Parkinson’s disease and sports injuries. 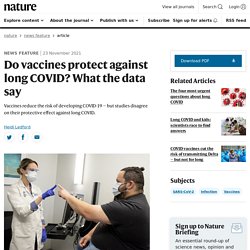 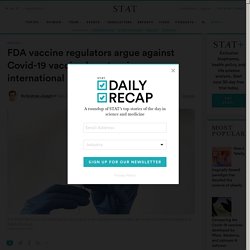 Others authors include experts from the World Health Organization, which has called for countries to delay broad booster plans as many countries are still suffering from a lack of vaccine supply in the face of horrific outbreaks driven by the highly transmissible Delta variant. advertisement “Current evidence does not, therefore, appear to show a need for boosting in the general population, in which efficacy against severe disease remains high,” the authors wrote. The paper is sure to add to debate about whether the White House got ahead of its scientific agencies in outlining plans for general boosters, which the Biden administration had signaled would start rolling out next Monday. But for the general population, experts have been divided over whether boosters are necessary. Public Opinion on COVID-19 Crisis: All Gallup News Articles.

Least Vaccinated U.S. Counties Have Something in Common: Trump Voters. About 31 percent of adults in the United States have now been fully vaccinated. 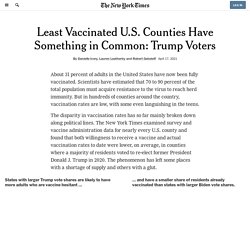 Scientists have estimated that 70 to 90 percent of the total population must acquire resistance to the virus to reach herd immunity. But in hundreds of counties around the country, vaccination rates are low, with some even languishing in the teens. The disparity in vaccination rates has so far mainly broken down along political lines.

The New York Times examined survey and vaccine administration data for nearly every U.S. county and found that both willingness to receive a vaccine and actual vaccination rates to date were lower, on average, in counties where a majority of residents voted to re-elect former President Donald J. Trump in 2020. States with larger Trump vote shares are likely to have more adults who are vaccine hesitant ... … and have a smaller share of residents already vaccinated than states with larger Biden vote shares. The health department, Ms. Ms. Estimated share of adults who may be Dr. An unvaccinated worker set off an outbreak at a U.S. nursing home where most residents were immunized.

An unvaccinated health care worker set off a Covid-19 outbreak at a nursing home in Kentucky where the vast majority of residents had been vaccinated, leading to dozens of infections, including 22 cases among residents and employees who were already fully vaccinated, a new study reported Wednesday. 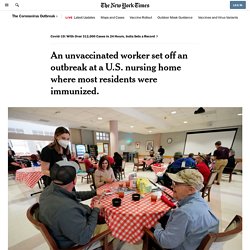 Most of those who were infected with the coronavirus despite being vaccinated did not develop symptoms or require hospitalization, but one vaccinated individual, who was a resident of the nursing home, died, according to the study released by the Centers for Disease Control and Prevention. Altogether, 26 facility residents were infected, including 18 who had been vaccinated, and 20 health care personnel were infected, including four who had been vaccinated. Two unvaccinated residents also died. COVID-19 Outbreak Associated with a SARS-CoV-2 R.1 Lineage Variant in a Skilled Nursing Facility After Vaccination Program — Kentucky, March 2021.

In a SNF with 90.4% of residents vaccinated, an outbreak of COVID-19 occurred after introduction from an unvaccinated, symptomatic HCP. 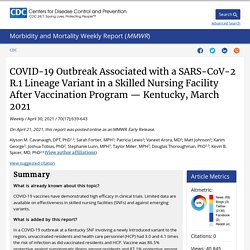 WGS identified an R.1 lineage variant, characterized by E484K and other mutations within the spike protein. Attack rates were three to four times as high among unvaccinated residents and HCP as among those who were vaccinated; vaccinated persons were significantly less likely to experience symptoms or require hospitalization. Although the R.1 variant is not currently identified as a CDC variant of concern or interest,*** it does have several mutations of importance. The D614G mutation demonstrates evidence of increasing virus transmissibility (4). The E484K mutation, found within the receptor-binding domain of the spike protein, is also seen in the variants of concern B.1.351 and P.1, which show evidence of reduced neutralization by convalescent and postvaccination sera (5,6). The findings in this report are subject to at least three limitations. 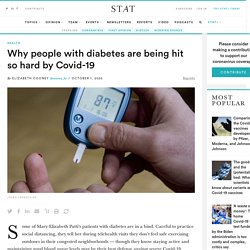 Careful to practice social distancing, they tell her during telehealth visits they don’t feel safe exercising outdoors in their congested neighborhoods — though they know staying active and maintaining good blood sugar levels may be their best defense against severe Covid-19. “I’m always happy when patients say, yes, I’m not going out, I’m wearing a mask, I’m doing as much as I can. But it makes it harder for people to meet their fitness goal, which is such a critical element of overall health and metabolic health,” said Patti, an adult endocrinologist at Joslin Diabetes Center in Boston. “It underscores the health inequity problem,” she added: “Their exposures may be increased due to living in a densely populated neighborhood with multigenerational families [and] more essential workers who cannot work from home.” advertisement The numbers are alarming. Data from the U.S. New Analysis of COVID-19 Mortality Risk for Californians with Disabilities Under Age 65 - Disability Rights Education & Defense Fund.

The coronavirus is mutating — does it matter? When COVID-19 spread around the globe this year, David Montefiori wondered how the deadly virus behind the pandemic might be changing as it passed from person to person. 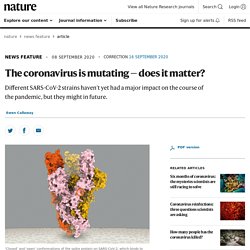 Montefiori is a virologist who has spent much of his career studying how chance mutations in HIV help it to evade the immune system. The same thing might happen with SARS-CoV-2, he thought. In March, Montefiori, who directs an AIDS-vaccine research laboratory at Duke University in Durham, North Carolina, contacted Bette Korber, an expert in HIV evolution and a long-time collaborator. Korber, a computational biologist at the Los Alamos National Laboratory (LANL) in New Mexico, had already started scouring thousands of coronavirus genetic sequences for mutations that might have changed the virus’s properties as it made its way around the world. Commercial Laboratory Seroprevalence Surveys. Antibody study finds coronavirus infections may have been 10 times higher in Bay Area. Nearly 10 times as many Bay Area residents had been infected with the coronavirus by the end of April than the official tally at the time, according to a new federal study that analyzed antibody tests to determine how widespread the virus was across a handful of United States hot spots. 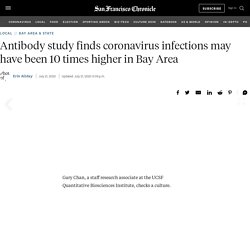 The study underscores just how deficient testing for the virus was in the early weeks of the pandemic, when the vast majority of cases were never identified. At the same time, it provides further evidence that aggressive shelter-in-place orders protected much of the Bay Area, where researchers estimate only about 1% of all residents had been infected by the time the study was done. That number is surely higher now with the outbreak surging again. Scientists with the Centers for Disease Control and Prevention estimate that 65,000 people in the Bay Area had been infected with the coronavirus by April 27, based on results of antibody tests conducted on a sample of the population.