Nejm. Animal source of the coronavirus continues to elude scientists. As a growing number of countries push for an independent investigation into the origin of the COVID-19 pandemic, many scientists around the world are already trying to uncover when, where and how the new coronavirus got into people. 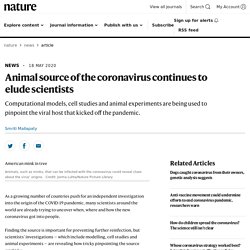 Finding the source is important for preventing further reinfection, but scientists’ investigations — which include modelling, cell studies and animal experiments — are revealing how tricky pinpointing the source might be. “It is quite possible we won’t find it. In fact, it would be exceptionally lucky if we land on something,” says Lucy van Dorp, a geneticist from University College London (UCL). There is strong evidence that the virus originated in bats. Understanding the Risk of Bat Coronavirus Emergence - Peter Daszak.

Understanding the Risk of Bat Coronavirus Emergence Novel zoonotic, bat-origin CoVs are a significant threat to global health and food security, as the cause of SARS in China in 2002, the ongoing outbreak of MERS, and of a newly emerged Swine Acute Diarrhea Syndrome in China. 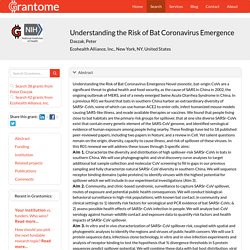 In a previous R01 we found that bats in southern China harbor an extraordinary diversity of SARSr-CoVs, some of which can use human ACE2 to enter cells, infect humanized mouse models causing SARS-like illness, and evade available therapies or vaccines. We found that people living close to bat habitats are the primary risk groups for spillover, that at one site diverse SARSr-CoVs exist that contain every genetic element of the SARS-CoV genome, and identified serological evidence of human exposure among people living nearby.

Coronavirus origins: Genome analysis suggests two viruses may have combined. In the space of a few weeks, we have all learned a lot about COVID-19 and the virus that causes it: SARS-CoV-2. 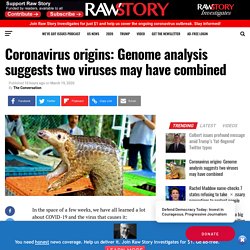 But there have also been a lot of rumours. And while the number of scientific articles on this virus is increasing, there are still many grey areas as to its origins. A Proposed Origin for SARS-CoV-2 and the COVID-19 Pandemic - Independent Science News. By Jonathan Latham, PhD and Allison Wilson, PhD In all the discussions of the origin of the COVID-19 pandemic, enormous scientific attention has been paid to the molecular character of the SARS-CoV-2 virus, including its novel genome sequence in comparison with its near relatives. 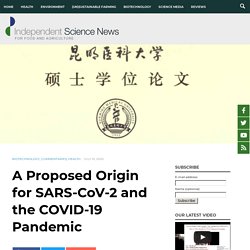 In stark contrast, virtually no attention has been paid to the physical provenance of those nearest genetic relatives, its presumptive ancestors, which are two viral sequences named BtCoV/4991 and RaTG13. This neglect is surprising because their provenance is more than interesting. BtCoV/4991 and RaTG13 were collected from a mineshaft in Yunnan province, China, in 2012/2013 by researchers from the lab of Zheng-li Shi at the Wuhan Institute of Virology (WIV).

Evidence SARS-CoV-2 Emerged From a Biological Laboratory in Wuhan, China. The biggest mystery: what it will take to trace the coronavirus source. Since the pandemic began, the question of where the coronavirus came from has been one of the biggest puzzles. 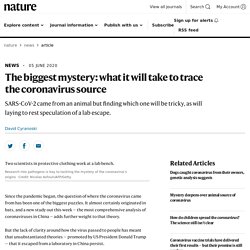 It almost certainly originated in bats, and a new study out this week — the most comprehensive analysis of coronaviruses in China — adds further weight to that theory. But the lack of clarity around how the virus passed to people has meant that unsubstantiated theories — promoted by US President Donald Trump — that it escaped from a laboratory in China persist. By contrast, most researchers say the more likely explanation, given what is known so far about this virus and others like it, is that bats passed it to an intermediate animal, which then spread it to people.

Chinese Military Discussed Weaponizing COVID In 2015 'To Cause Enemy's Medical System To Collapse' In 2015, Chinese military scientists discussed how to weaponze SARS coronaviruses, five years before the COVID-19 pandemic emerged in Wuhan, China - where CCP scientists were collaborating with a US-funded NGO on so-called 'gain of function' research to make bat coronaviruses infect humans more easily. 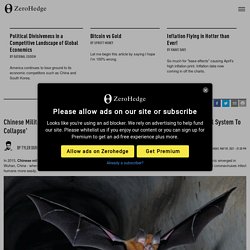 In a 263-page document, written by People's Liberation Army scientists and senior Chinese public health officials and obtained by the US State Department during its investigation into the origins of COVID-19, PLA scientists note how a sudden surge of patients requiring hospitalization during a bioweapon attack "could cause the enemy’s medical system to collapse," according to The Weekend Australian (a subsidiary of News Corp). It suggests that SARS coronaviruses could herald a "new era of genetic weapons," and noted that they can be "artificially manipulated into an emerging human ­disease virus, then weaponized and unleashed in a way never seen before.

" The origin of COVID: Did people or nature open Pandora’s box at Wuhan? The COVID-19 pandemic has disrupted lives the world over for more than a year. 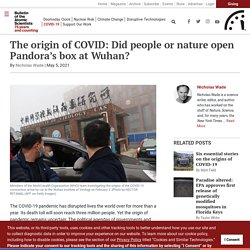 Its death toll will soon reach three million people. Yet the origin of pandemic remains uncertain: The political agendas of governments and scientists have generated thick clouds of obfuscation, which the mainstream press seems helpless to dispel. In what follows I will sort through the available scientific facts, which hold many clues as to what happened, and provide readers with the evidence to make their own judgments. I will then try to assess the complex issue of blame, which starts with, but extends far beyond, the government of China. By the end of this article, you may have learned a lot about the molecular biology of viruses. Evidence Reveals That Military Team Collaborated With Lab in City Where COVID-19 Pandemic Originated.

The Chinese regime has said its controversial virology institute had no relationship with the military, but the institute worked with military leaders on a government-sponsored project for years. 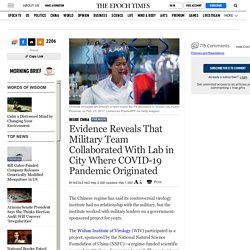 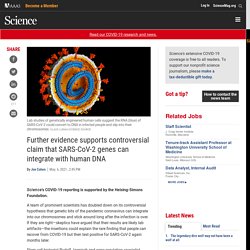 A team of prominent scientists has doubled down on its controversial hypothesis that genetic bits of the pandemic coronavirus can integrate into our chromosomes and stick around long after the infection is over. If they are right—skeptics have argued that their results are likely lab artifacts—the insertions could explain the rare finding that people can recover from COVID-19 but then test positive for SARS-CoV-2 again months later. The Case Is Building That COVID-19 Had a Lab Origin. By Jonathan Latham, PhD and Allison Wilson, PhD If the public has learned a lesson from the COVID-19 pandemic it is that science does not generate certainty. 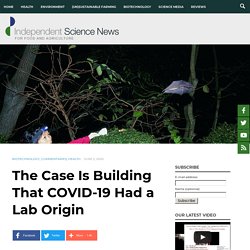 Do homemade face masks work? What is the death rate of COVID-19? How accurate are the tests? Chinese Lab with Checkered Safety Record Draws Scrutiny over COVID-19. In the more than four months since China reported an outbreak of viral pneumonia in Hubei province, the coronavirus has raced to nearly every corner of the world, but there are still no firm answers as to where it all began. China has said the first infected people caught the virus from live animals being sold in a wet market in Wuhan, Hubei’s main city. But since the first public reports of an unusual viral outbreak emerged last December, many observers have also noted that China’s first Level 4 bio-safety lab, which conducts research on animal coronaviruses, is located just a few kilometers from the wet market. s41586 020 2012 7. Post-lockdown SARS-CoV-2 nucleic acid screening in nearly ten million residents of Wuhan, China.

Study population and ethical approvals Wuhan has about 11 million residents in total, with seven urban and eight suburban districts. Residents are living in 7280 residential communities (or residential enclosures, “xiao-qu” in Chinese), and each residential community could be physically isolated from other communities for preventing transmission of COVID-19. The screening programme recruited residents (including recovered COVID-19 patients) currently living in Wuhan who were aged ≥6 years (5,162,960 males, 52.2%). All participants provided written or verbal informed consent after reading a statement that explained the purpose of the testing. The coronavirus is mutating — does it matter? When COVID-19 spread around the globe this year, David Montefiori wondered how the deadly virus behind the pandemic might be changing as it passed from person to person. Montefiori is a virologist who has spent much of his career studying how chance mutations in HIV help it to evade the immune system.

The same thing might happen with SARS-CoV-2, he thought. In March, Montefiori, who directs an AIDS-vaccine research laboratory at Duke University in Durham, North Carolina, contacted Bette Korber, an expert in HIV evolution and a long-time collaborator. Korber, a computational biologist at the Los Alamos National Laboratory (LANL) in New Mexico, had already started scouring thousands of coronavirus genetic sequences for mutations that might have changed the virus’s properties as it made its way around the world.

Compared with HIV, SARS-CoV-2 is changing much more slowly as it spreads. Children Often Carry More Coronavirus than Adults Do: Study. A new study is challenging the idea that younger children are somehow less susceptible to SARS-CoV-2 infection. Children under the age of five have been found to carry just as much, if not more, coronavirus in their noses and throats than older kids or adults. The results, published Thursday (July 30) in JAMA Pediatrics, tested 145 people for evidence of the virus’s RNA.

After breaking their participants down into three age categories—younger children, older children, and adults—researchers found that the youngest group harbored between 10 times and 100 times more virus than the other two. Age-Related Differences in Nasopharyngeal Severe Acute Respiratory Syndrome Coronavirus 2 (SARS-CoV-2) Levels in Patients With Mild to Moderate Coronavirus Disease 2019 (COVID-19) Children are susceptible to infection with severe acute respiratory syndrome coronavirus 2 (SARS-CoV-2) but generally present with mild symptoms compared with adults.1 Children drive spread of respiratory and gastrointestinal illnesses in the population,2 but data on children as sources of SARS-CoV-2 spread are sparse.

Early reports did not find strong evidence of children as major contributors to SARS-CoV-2 spread,3 but school closures early in pandemic responses thwarted larger-scale investigations of schools as a source of community transmission. As public health systems look to reopen schools and day cares, understanding transmission potential in children will be important to guide public health measures. Here, we report that replication of SARS-CoV-2 in older children leads to similar levels of viral nucleic acid as adults, but significantly greater amounts of viral nucleic acid are detected in children younger than 5 years. Figure. Editorial: Giving the Right Name to the Virus Causing a Worldwide Pandemic. Immunity. Life Encoded. Viruses.