Covid-19 Vaccine Going to White People While Black Americans Suffer. In completely unsurprising and truly harrowing news, an analysis of the Associated Press has found a huge racial disparity in who is receiving the covid-19 vaccine. 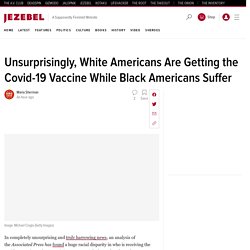 After examining 17 states (Alaska, Colorado, Delaware, Florida, Indiana, Maryland, Mississippi, Nebraska, New Jersey, North Carolina, Ohio, Oregon, Tennessee, Texas, Vermont, Virginia and West Virginia) and two cities (Philadelphia, PA and Chicago, IL) the news organization determined that Black Americans are receiving inoculations well below their population percentage, while white people are disproportionately getting doses. In Maryland, where Black people make up 30 percent of the population and 40 percent of the health care industry, they account for only 16 percent of total vaccinations—compare that to white people who have received 67 percent of the vaccinations, though they make up just 55 percent of the population.

That Flawed Stanford Study. Probability. Translating Calorie Counts into Exercise Equivalents Leads to Healthier Choices. By mid-2012, coffee shops and burger joints across the country will be required to prominently display nutritional information about their food products. 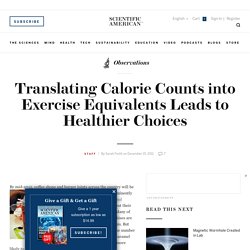 Many of the larger franchises are already doing this. But does knowing the number of calories in a caramel latte make you more likely to choose a fat-free coffee? Unfortunately, nomost studies have found that caloric signage has little or no impact on the food choices that customers make. The Daily Show tests if a "good guy with a gun" can stop a mass shooting. 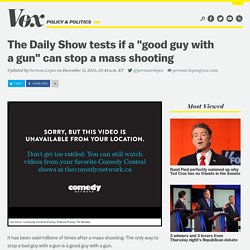 On Thursday, The Daily Show's Jordan Klepper put the theory to the test. He trained on the basics of using a firearm and got a concealed carry permit that's valid in 30 states. Then he participated in mass shooting simulations to see how, exactly, he would hold up in such a scenario. He failed. Miserably. Klepper isn't the first to show just how badly the majority of people would do in mass shooting situations. As instructors told Klepper, it requires hundreds of hours of training to be able to deal with these types of situations. The results explain why it's so rare for "a good guy with a gun" to stop active shooters. Agavins reverse the metabolic disorders in overweight mice through the increment of short chain fatty acids and hormones. Abigail Fisher, Please Stop Blaming People of Color for Your Mediocrity. By Kwanzaa Imani Last week, Abigail Fisher’s case against The University of Texas at Austin gained media attention when she announced that she would once again be taking it before the Supreme Court. 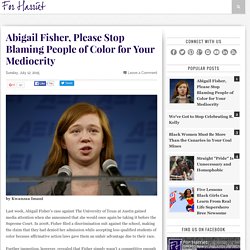 In 2008, Fisher filed a discrimination suit against the school, making the claim that they had denied her admission while accepting less qualified students of color because affirmative action laws gave them an unfair advantage due to their race. Further inspection, however, revealed that Fisher simply wasn’t a competitive enough student to qualify for a spot. UT Austin’s Top Ten Percent Plan accounts for 92 percent of its admissions, with the plan guaranteeing Texas high school seniors within the top ten percent of their graduating class admission to the university.

Testosterone. Qualtrics Survey Software. Can you trust political trends? If you plot up the presidential results since Reagan came along, you get something interesting: a nice little regression. Using results from 1980-2008 (excluding 1992), you would have predicted that Obama would win in 2012 with about 53 percent of the vote, close to the actual result of about 51 percent, which is pretty surprising considering this method does not take into account any consideration of economics, who the Republican nominee was, or anything else of that nature.

Here's the graph: We should interpret this graph as showing that it has been a little less likely for the Republican to win the presidency in each successive cycle as of late. In 2016, it will be even less likely than it was this year. However, unlikely does not mean impossible, and it would still be consistent with the long-term trend if a Republican wins in 2016. But how much faith should we put in political trends like this? Until 1932. But that's not fair! And that's the point. A few more considerations below. 5 Statistics Problems That Will Change The Way You See The World - Walter Hickey. Once the population of an office hits 366 people, it's a certainty that two people in your office have the same birthday, since there are only 365 possible days of birth. 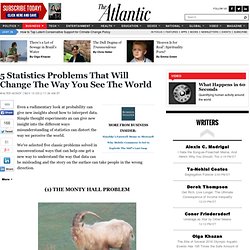