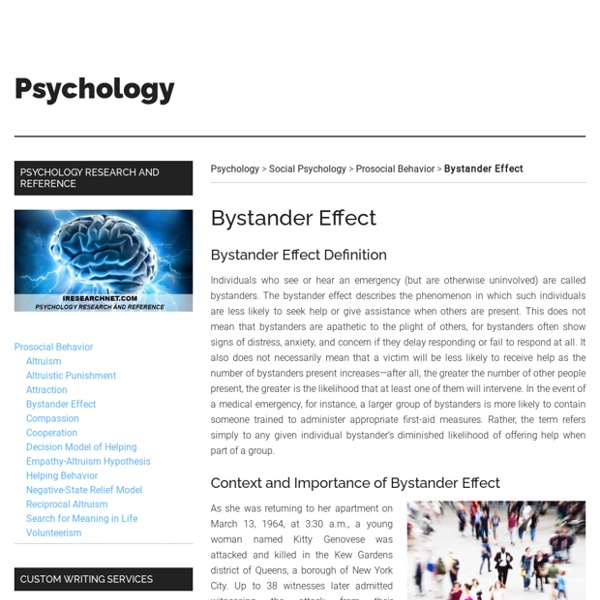 Bystander Effect Definition Individuals who see or hear an emergency (but are otherwise uninvolved) are called bystanders. The bystander effect describes the phenomenon in which such individuals are less likely to seek help or give assistance when others are present. This does not mean that bystanders are apathetic to the plight of others, for bystanders often show signs of distress, anxiety, and concern if they delay responding or fail to respond at all. It also does not necessarily mean that a victim will be less likely to receive help as the number of bystanders present increases—after all, the greater the number of other people present, the greater is the likelihood that at least one of them will intervene. In the event of a medical emergency, for instance, a larger group of bystanders is more likely to contain someone trained to administer appropriate first-aid measures. Context and Importance of Bystander Effect Bystander Effect Evidence and Explanations Social inhibition.

Bystander Effect Bystander effect, the inhibiting influence of the presence of others on a person’s willingness to help someone in need. Research has shown that, even in an emergency, a bystander is less likely to extend help when he or she is in the real or imagined presence of others than when he or she is alone. Moreover, the number of others is important, such that more bystanders leads to less assistance, although the impact of each additional bystander has a diminishing impact on helping. Investigations of the bystander effect in the 1960s and ’70s sparked a wealth of research on helping behaviour, which has expanded beyond emergency situations to include everyday forms of helping. By illuminating the power of situations to affect individuals’ perceptions, decisions, and behaviour, study of the bystander effect continues to influence the course of social psychological theory and research.

If You’re in Danger, Will Bystanders Help? Almost every psychology student knows about Kitty Genovese, the 28-year-old Queens woman who was stabbed to death in 1964. At the time, the New York Times reported that no one had lifted a finger to rescue her. Though that story was later debunked—some people did call the police or shout down the assailant—Genovese’s death provoked a flurry of research on what’s now called the bystander effect. According to decades of experiments, the more people who are observing someone in trouble, the less likely each person is to help.

What Is the Bystander Effect? – Now. Powered by Northrop Grumman If you see someone in distress, will you help them? We all like to consider ourselves to be good people, but when we’re caught in the moment, we freeze. What is the bystander effect? For more than 50 years, psychologists have observed this phenomenon again and again in experiments and in real life. The research overwhelmingly shows the more people that are present when there’s an emergency, the less likely they are to help. We Are All Bystanders For more than 40 years, Peggy Kirihara has felt guilty about Stewart. Peggy liked Stewart. They went to high school together. Their fathers were friends, both farmers in California’s Central Valley, and Peggy would always say “hi” when she passed Stewart in the hall.

Bystander effect – News, Research and Analysis – The Conversation – page 1 At least half of campus sexual assaults involve alcohol. But prevention programs at US colleges and universities don’t address what that means for bystanders. Incorporating lessons on healthy sexual behavior into sex ed classes and special prevention programs for youth could be key to reducing sexual violence, experts say. Research shows that few people take a stand when they witness sexual harassment. How The Murder Of Kitty Genovese Created The Bystander Effect Wikimedia CommonsKitty Genovese whose muder would inspire the psychological phenomenon known as the bystander effect. At approximately 3:15 a.m. on March 13, 1964, a woman was murdered. Her name was Kitty Genovese. She was 28 years old, “self-assured beyond her years,” and had a “sunny disposition.” However, on that Friday evening, none of that mattered. As Kitty Genovese was stabbed to death in an alleyway outside her home, the friends and neighbors she had lived next to for several years stood by, choosing not to get involved as she lay there dying.

What Is the 'Bystander Effect' and How Do People Overcome It? This story appeared in the June 2020 issue as "Action!" Subscribe to Discover magazine for more stories like this. On April 9, 2017, three security officers from the Chicago Department of Aviation forcibly removed David Dao from an overbooked United Airlines flight. Dao, a 69-year-old doctor, was dragged down the plane’s aisle after he refused to give up his seat. The legend of Kitty Genovese and those who ignored her screams When I was growing up in New York City, everyone knew about Kitty Genovese. We all knew the story of the 28-year-old bar manager who had been robbed, raped and stabbed to death outside her apartment building in Queens in 1964 while 38 people watched or listened to her screams outside their apartments but did nothing to stop the attack. It was more than just another tabloid murder; it was a morality tale — exhibit A for the argument that cities were alienating and dehumanizing, that there was no such thing as neighborhood or community, that people were cold, cruel, selfish, indifferent. Even today, Kitty Genovese’s name is still invoked not just in New York but around the world when people fail to come to each other’s aid in times of violence and trouble.

How to overcome the bystander effect While most of us are sympathetic toward helping someone, the bystander effect can prevent us from stepping in. The bystander effect is when a group of people sees a problem or someone in need, but no one does anything to help. Why don’t we help? One reason why people choose not to help is because they observe and follow what other people are doing. So if everyone is passing by and not paying attention, we conclude that what’s happening isn’t a big deal. After all, no one else looks concerned. How to Be Kinder to Strangers in Singapore The Charities Aid Foundation recently released the World Giving Index 2017, which provides insight into the scope and nature of giving around the world. Based on data collected from the Gallup World Poll, the index, which polled 1,000 individuals in each representative country, revealed two surprising facts. Myanmar, Indonesia and Kenya turned out to be among the most charitable countries, even though they have a huge number of their populations living below the poverty line.

Overcoming the Bystander Effect — The RAD Group Research and personal experience both demonstrate that people are less likely to intervene (offer help) when there are other people around than they are when they are the only person observing the incident. This phenomenon has come to be known as the Bystander Effect and understanding it is crucial to increasing intervention into unsafe actions in the workplace. It came to light following an incident on March 13, 1964 when a young woman named Kitty Genovese was attacked by a knife-wielding rapist outside of her apartment complex in Queens, New York. Many people watched and listened from their windows for the 35 minutes that she attempted to escape while screaming that he was trying to kill her. 7 charged in stabbing death of 16-year-old broadcast on Snapchat as dozens watched Family and friends of Khaseen Morris, the 16-year-old whose stabbing death was broadcast over Snapchat, gathered Saturday at the Tower Funeral Home in Oceanside, New York, to remember the late teen. Meanwhile, prosecutors announced that seven suspects have been charged with gang assault in connection to Morris' death. An eighth man has already been charged with murder. Morris was in the parking lot of a strip mall on Sept. 16 when he was fatally stabbed, reportedly over a girl, as dozens of onlookers watched and no one tried to intervene. Even more people viewed the brutal killing on the social media app. Morris was taken from the scene to the hospital, where he was pronounced dead.