Chaoyang Trap. A U.S. Diplomat’s Wife Was a Social Media Star—Until Chinese Trolls, Aided by State Media, Came After Her. In U.S. 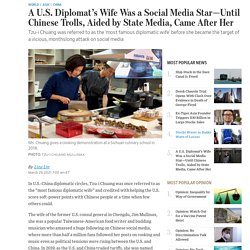 -China diplomatic circles, Tzu-i Chuang was once referred to as the “most famous diplomatic wife” and credited with helping the U.S. score soft-power points with Chinese people at a time when few others could. The wife of the former U.S. consul general in Chengdu, Jim Mullinax, she was a popular Taiwanese-American food writer and budding musician who amassed a huge following on Chinese social media, where more than half a million fans followed her posts on cooking and music even as political tensions were rising between the U.S. and China.

In 2019, as the U.S. and China traded tariffs, she was named cultural and tourism ambassador for Chengdu city. Then, in July, Chinese social-media users turned against her. They seized on a comment she had made in an earlier post—one she later said she regretted—and flooded her social-media feeds with vitriol for months. Ms. Beijing Asks Alibaba to Shed Its Media Assets. China’s government has asked Alibaba Group Holding Ltd. to dispose of its media assets, as officials grow more concerned about the technology giant’s sway over public opinion in the country, according to people familiar with the matter. 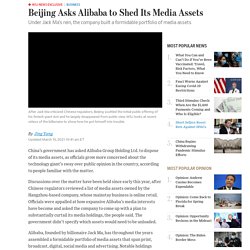 Discussions over the matter have been held since early this year, after Chinese regulators reviewed a list of media assets owned by the Hangzhou-based company, whose mainstay business is online retail. Officials were appalled at how expansive Alibaba’s media interests have become and asked the company to come up with a plan to substantially curtail its media holdings, the people said. The government didn’t specify which assets would need to be unloaded. China’s Telling Twitter Story. Twitter users are liking and sharing fewer tweets by Chinese news outlets since the social media platform started labeling them as state-affiliated, an analysis by the China Media Project shows. 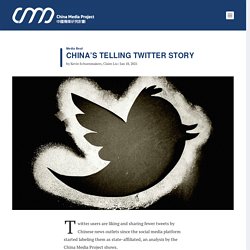 Comparing tweets from a sample of 33 official Chinese accounts on Twitter for 50-day periods immediately before and after the implementation of the new policy in August 2020, CMP found that tweets by most of the accounts studied showed significantly fewer shares and likes. It’s Time to Pop China’s Online Filter Bubbles. One afternoon in mid-November, a university journalism professor confided in me a not-so-shocking secret: “I only found out today what ‘Versailles literature’ actually means.” 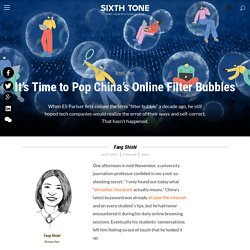 China’s latest buzzword was already all over the internet and on every student’s lips, but he had never encountered it during his daily online browsing sessions. Eventually his students’ conversations left him feeling so out of touch that he looked it up. These are the secret code words that let you criticize the Chinese government. Making Sense of China’s Deafening ‘Fanquan’ Echo Chambers. On Feb. 29, Chinese users of the popular fan fiction site Archive of Our Own (AO3) discovered the site was no longer accessible in the Chinese mainland. 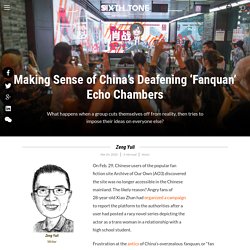 The likely reason? Angry fans of 28-year-old Xiao Zhan had organized a campaign to report the platform to the authorities after a user had posted a racy novel series depicting the actor as a trans woman in a relationship with a high school student. Frustration at the antics of China’s overzealous fanquan, or “fan circles” has been brewing for some time: Their immaturity, anti-intellectualism, zealousness, and blind obedience is by this point well known. For anything members find objectionable, they often display a hair-trigger response — cyberbullying, doxing, and reporting their “enemies” to platforms or even the authorities. 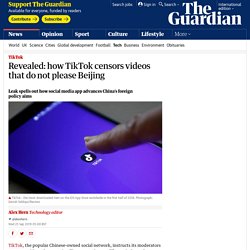 The documents, revealed by the Guardian for the first time, lay out how ByteDance, the Beijing-headquartered technology company that owns TikTok, is advancing Chinese foreign policy aims abroad through the app. The revelations come amid rising suspicion that discussion of the Hong Kong protests on TikTok is being censored for political reasons: a Washington Post report earlier this month noted that a search on the site for the city-state revealed “barely a hint of unrest in sight”. The guidelines divide banned material into two categories: some content is marked as a “violation”, which sees it deleted from the site entirely, and can lead to a user being banned from the service. Odd rules can be found elsewhere in the guidelines. What is WeChat? The super-app you can’t live without in China - SupChina. All about the money Many of the cutting-edge features involve money, so you need to activate WeChat Pay, a digital wallet service, which, along with Alibaba’s Alipay, has transformed China into a nearly cashless society, just in the last five years. 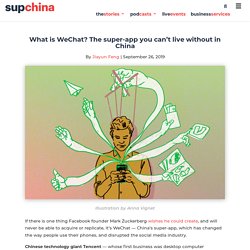 To get the full suite of features, you need a Chinese credit or debit card. You also need to use a mainland ID card, or Mainland Travel Permit for Hong Kong, Macao, and Taiwan residents for real-name verification. Foreigners with legal residence in China can access some but not all of the advanced features. If you only hold a foreign bank card, WeChat Wallet can still be set up for in-app purchases, payments in physical stores by scanning barcodes, and even making donations to panhandlers on the streets.

The mobile payment system is a huge draw for users as it unlocks myriad functions that generally fall into the following categories: Food delivery (see demo in GIF above) News Ecommerce Ride-hailing Movies Travel Real estate. Infographic: Here’s What Happens in One Minute on the Chinese Internet. In August, China’s internet population surpassed 800 million for the first time according to official government statistics. 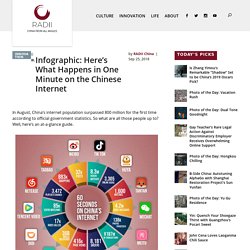 So what are all those people up to? Well, here’s an at-a-glance guide. Sources: baijiahao.baidu.com, econsultancy.com, ifeng.com, prnewswire.com, qudong.com, sina.com.cn, wenku.baidu.com Not familiar with some of those names? Here’s a quick who’s who: Tik Tok also known as Douyin is one of China’s leading short video apps. Huya is one of the country’s biggest game streaming platforms and listed on the New York Stock Exchange back in May. Dating app TanTan is regularly referred to as “China’s Tinder”.