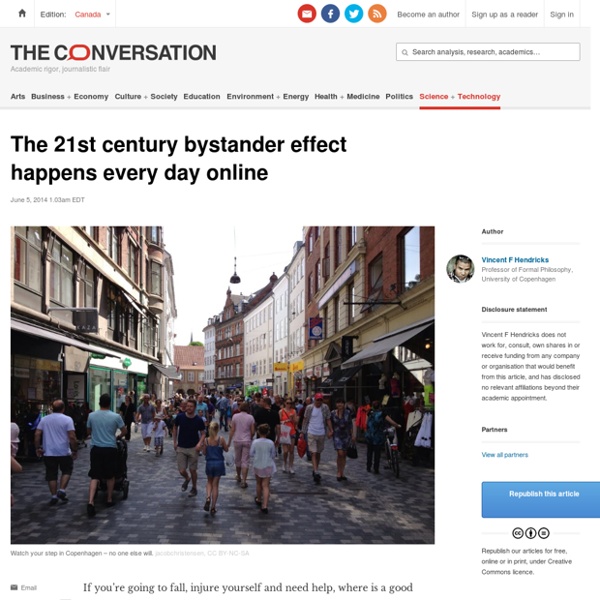 If you’re going to fall, injure yourself and need help, where is a good place to do it? Should you choose a busy thoroughfare or a deserted backstreet? Statistics and experiments in social psychology will tell you that if you need help, you should avoid dropping in a busy street, even if hundreds of people are passing through. This is because of a phenomenon known as the bystander effect. The more individuals gathered in one place, the less chance there is of one of them coming to the aid of a person in need. When an emergency situation occurs, it’s more likely that someone will come to the rescue if there are fewer or almost no witnesses. And in the 21st century, when our thoroughfares are online and on social networks, millions of people are effectively passing each other by every minute. The presence of other people has long been shown to give rise to confusion about responsibility. Updating the research The 21st century bystander

These heroes reach out from home amid Covid-19 pandemic, Singapore News One developed a website to give hawker stalls a greater online presence. Another held a film screening and post-session discussions online to recapture the communal experience of cinema. The Sunday Times speaks to five groups who have responded to circuit breaker measures in creative ways that have made Singaporean lives a tad better. Hosting a 'watch party' to give film lovers, local distributors a boost Khaseen Morris: Teen held for killing that bystanders filmed Image copyright Nassau County Police A New York teenager has been charged with the fatal stabbing of a 16-year-old boy whom bystanders filmed bleeding to death. Tyler Flach, 18, is accused of second-degree murder in the deadly after-school brawl that broke out not far from the victim's Long Island school.

TODAYonline I refer to the news reports of the fatal traffic accident on Sunday (Dec 29) at Lucky Plaza. I applaud the Good Samaritans who unselfishly helped to lift up the car, pulled the victims out and attended to them. These are acts of true heroism. Man slashed & robbed at Tanglin Halt claims witnesses "did nothing to help" - Mothership.SG - News from Singapore, Asia and around the world A 58-year-old man was recently arrested for his suspected involvement in a case of armed robbery. On Oct. 13, the suspect slashed another man with a fruit knife near Tanglin Halt Road, and managed to get away with the victim's mobile phone as well. The suspect was arrested on the same day and was subsequently charged in court two days after the incident. 10 Notorious Cases of the Bystander Effect The bystander effect is the somewhat controversial name given to a social psychological phenomenon in cases where individuals do not offer help in an emergency situation when other people are present. The probability of help has in the past been thought to be inversely proportional to the number of bystanders. In other words, the greater the number of bystanders, the less likely it is that any one of them will help. This list describes the prototype of the effect and cites nine particularly heinous examples. The Parable of The Good Samaritan First, the prototype of the bystander effect.

Pluralistic Ignorance (SOCIAL PSYCHOLOGY) - iResearchNet Pluralistic Ignorance Definition Pluralistic ignorance occurs when people erroneously infer that they feel differently from their peers, even though they are behaving similarly. As one example, imagine the following scenario: You are sitting in a large lecture hall listening to an especially complicated lecture.

What the Kitty Genovese Killing Can Teach Today’s Digital Bystanders As Retro Report notes, two social psychologists in New York, John M. Darley and Bibb Latané, conducted experiments that led them to posit that Ms. Genovese might have survived had there been fewer witnesses. Numbers can inhibit action, they concluded. “You think that if there are many people who are witness to something that other people certainly already have done something — why should it be me?”

If the young woman or man or the elderly gentlemen were wearing business suits and fell, the time it took for someone to intervene could be as short as a few seconds. For the actors wearing shabby outfits, it could take up to around four minutes for anyone to intervene, even though plenty of people witnessed the accident. This studies shows that bystander effect, as people would expect others would help the unfortunate or poor person, they thought others would not offer help to fortunate or wealthy person. by priciliachan Sep 20