Imagine you are walking on the street and caught yourself in the situation which a group of bystanders witness harm being done, yet do nothing to help or stop the harmful activity. What would you do, would you step in to give a helping hand.

Bystander Effect. Absorbing the Bystander Effect: A Social Psychological Phenomenon - Psychologenie. ‘We Are All Responsible’: How #MeToo Rejects the Bystander Effect. Soraya Roberts | Longreads | February 2019 | 8 minutes (2,357 words) Halfway through Dirty John, the Bravo series based on the life of sociopathic con artist John Meehan, the titular character’s first wife, having discovered her husband of several years has been cheating and shooting up, meets one of his friends in a diner. 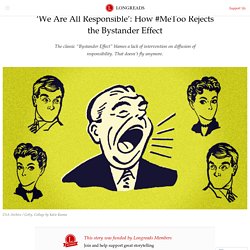 Sitting stone-faced across from her husband’s grinning college buddy, she learns how “Dirty John” got his nickname through an ever-expanding laundry list of scams his classmates witnessed: being a “dog” with women, conning old people, credit card fraud, insurance fraud. She says nothing, but it’s clear from her face that she is getting progressively more enraged at this man for having repeatedly stood by and watched as the father of her children mistreated a succession of people. This is not the classic Bystander Effect, but it’s a variation that has become progressively pertinent within the current movement against sexual harassment and assault. Diffusion of Responsibility: Definition and Examples in Psychology.

What causes people to intervene and help others? 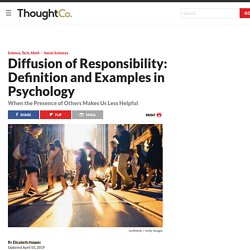 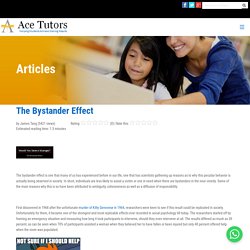 In short, individuals are less likely to assist a victim or one in need when there are bystanders in the near vicinity. Some of the main reasons why this is so have been attributed to ambiguity, cohesiveness as well as a diffusion of responsibility. First discovered in 1968 after the unfortunate murder of Kitty Genovese in 1964, researchers were keen to see if this result could be replicated in society. Unfortunately for them, it became one of the strongest and most replicable effects ever recorded in social psychology till today. The researchers started off by framing an emergency situation and measuring how long it took participants to intervene, should they even intervene at all.

Can Employers Overcome the Bystander Effect? What Would You Do. THE BYSTANDER EFFECT. Real life example. The Science of Empathy. How Kitty Genovese's Brutal Murder Created the "Bystander Effect" When 28-year-old Catherine Susan Genovese was killed outside her apartment in Kew Gardens, Queens, 38 people reportedly witnessed the attack but didn’t get involved. 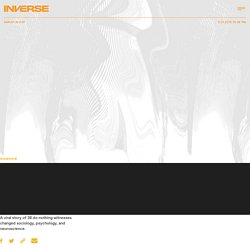 Known to her friends as Kitty, she had only lived at 82-70 Austin Street for a year with her girlfriend, Mary Ann Zielonko, before returning on the night of March 13 from her job managing a bar. Two weeks later, the assault and murder of this charming and bright-eyed woman became headline news. In his book, Kitty Genovese: The Murder, the Bystanders, the Crime That Changed America, journalist Kevin Cook reports that the 38 figure, which would later prove to be incredibly influential, is inaccurate.

“Thirty-eight” was tossed out by New York City Police Commissioner Michael Murphy while at lunch with the city editor of the New York Times, A.M. Rosenthal. Genovese’s murder shaped the social dynamic of cities and how Americans are taught to perceive their place as one person within a multitude. Here’s what actually happened: An antidote to the bystander effect. VanBommel bystander JESP. How to Overcome the Bystander Effect. Psychologists have long been interested in exactly why and when we help other people.

How to Break the Bystander Effect. They could have left it to someone else. An Army veteran blocked a shooter in Oregon from entering his classroom. Three friends on a high-speed train from Paris to Amsterdam helped stop a gunman wielding an AK-47. This past spring, an Army captain in North Carolina pulled a couple to safety after a fiery car crash. Were these men instinctively courageous, or had they learned to be? The Army captain (aptly wearing a Captain America T-shirt) credited his military training for knowing what to do and remaining calm.

These heroes are dramatic examples. And this conundrum is not limited to thwarting terrorism or physically saving someone. But we often look the other way, like the priest and Levite in the Good Samaritan parable.