Bystanders effect at Singapore after a fetal accidents in lucky Plaza 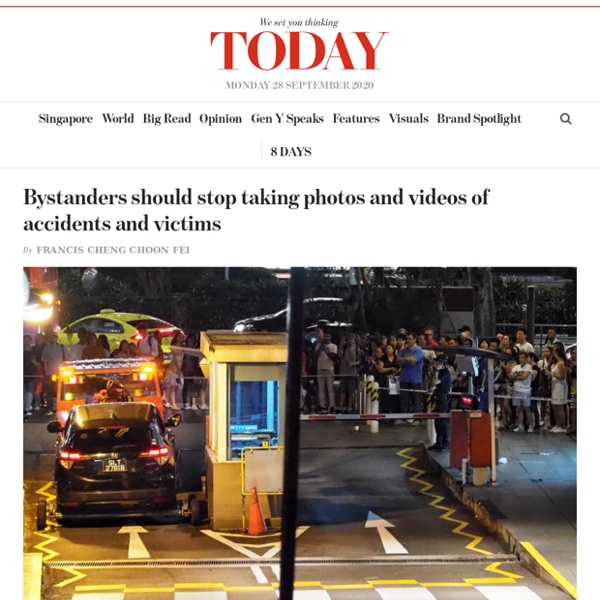 I refer to the news reports of the fatal traffic accident on Sunday (Dec 29) at Lucky Plaza. I applaud the Good Samaritans who unselfishly helped to lift up the car, pulled the victims out and attended to them. These are acts of true heroism. They encourage us to lend help to accident victims when needed and show that there are still compassionate people who don’t respond to accidents by whipping out their phones first to take videos and photos to circulate to their friends. In Sunday’s incident, one of the first things a bystander could do was to rush to the nearby Mount Elizabeth Hospital Accident and Emergency Department to seek help, as it would have the necessary medical equipment and trauma specialists on duty. This was crucial as the Singapore Civil Defence Force ambulances would take some time to arrive and the accident victims needed immediate medical attention and first aid. But this cannot be at the expense of not rendering help to victims.

Khaseen Morris: Teen held for killing that bystanders filmed Image copyright Nassau County Police A New York teenager has been charged with the fatal stabbing of a 16-year-old boy whom bystanders filmed bleeding to death. Tyler Flach, 18, is accused of second-degree murder in the deadly after-school brawl that broke out not far from the victim's Long Island school. Police said that most of the "50, 60, 70" kids who witnessed the attack on Khaseen Morris did nothing to stop it. "That's egregious," said Detective Lt Stephen Fitzpatrick. "Kids stood here and didn't help Khaseen," Lt Fitzpatrick said.

Singapore bystander CPR rate 'extremely low', Health News SINGAPORE - Wedneday's report ("Motorcyclist, 38, dies in Braddell Road accident") about a 19-year-old student who performed cardiopulmonary resuscitation (CPR) on a road accident victim clearly demonstrates that people are prepared to help others in need and try to save lives. The student's actions should be highly commended. Providing bystander first aid in the form of CPR, using an automated external defibrillator (AED) and trying to stem external bleeding are all forms of positive action meant to save lives. These may not always result in lives saved, but people in cardiac arrest who get prompt bystander CPR are two to three times more likely to survive than those who do not receive such help.

How to be kinder to strangers in Singapore, Opinion News The Charities Aid Foundation recently released the World Giving Index 2017, which provides insight into the scope and nature of giving around the world. Based on data collected from the Gallup World Poll, the index, which polled 1,000 individuals in each representative country, revealed two surprising facts. Myanmar, Indonesia and Kenya turned out to be among the most charitable countries, even though they have a huge number of their populations living below the poverty line. Being poor does not stop one from being generous. Pluralistic Ignorance (SOCIAL PSYCHOLOGY) - iResearchNet Pluralistic Ignorance Definition Pluralistic ignorance occurs when people erroneously infer that they feel differently from their peers, even though they are behaving similarly. As one example, imagine the following scenario: You are sitting in a large lecture hall listening to an especially complicated lecture. After many minutes of incomprehensible material, the lecturer pauses and asks if there are any questions. No hands go up. You look around the room.

The murder of "Kitty" Genovese that led to the Bystander Effect & the 911 system Catherine “Kitty” Genovese was a 28-year-old woman who was brutally murdered outside of her Queens apartment in New York City on March 13, 1964. Genovese’s attack lasted around 30 minutes as she was stabbed 14 times by a man named Winston Moseley. It was originally reported that there were 38 bystanders who turned their back on Genovese’s early morning cries for help, shutting their doors to silence her screams. Although that judgment was later proven to be inaccurate, the murder was considered the driving force behind our emergency 911 system today and the discovery of the term that so many psychologists are still researching: “The Bystander Effect.” It was around 3 o’clock in the morning when Genovese arrived home from managing a local bar where she worked. Kitty Genovese

What the Kitty Genovese Killing Can Teach Today’s Digital Bystanders As Retro Report notes, two social psychologists in New York, John M. Darley and Bibb Latané, conducted experiments that led them to posit that Ms. Genovese might have survived had there been fewer witnesses. Numbers can inhibit action, they concluded. How the Social Context Influences Helping – Principles of Social Psychology – 1st International Edition Review Bibb Latané and John Darley’s model of helping behavior and indicate the social psychological variables that influence each stage. Although emotional responses such as guilt, personal distress, and empathy are important determinants of altruism, it is the social situation itself—the people around us when we are deciding whether or not to help—that has perhaps the most important influence on whether and when we help. Consider the unusual case of the killing of 28-year-old Katherine “Kitty” Genovese in New York City at about 3:00 a.m. on March 13, 1964. Her attacker, Winston Moseley, stabbed and sexually assaulted her within a few yards of her apartment building in the borough of Queens.

Article summary: This event that happened a little closer to home shows another example of the bystander effect. During this event, Singaporeans just started whipping out their phones and were more interested in recording the event rather than actively helping the individual in need. by janessapng Sep 15