It’s all about the safe operating space - Stockholm Resilience Centre. NASA Reveals The Best Air Purifying Plants For Your Home. Having a happy, healthy home is at the top of many priorities. 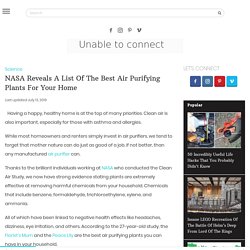 Clean air is also important, especially for those with asthma and allergies. While most homeowners and renters simply invest in air purifiers, we tend to forget that mother nature can do just as good of a job, if not better, than any manufactured air purifier can. Thanks to the brilliant individuals working at NASA who conducted the Clean Air Study, we now have strong evidence stating plants are extremely effective at removing harmful chemicals from your household. Il mito della “crescita verde” porterà al collasso ecologico. Cities are planting more trees to fight climate change and improve healthy living. Renewable energy versus nuclear: dispelling the myths. Dungeness nuclear power station in Kent, UK (photo Simon Ingram, 2014) Don’t believe the spurious claims of nuclear shills constantly putting down renewables, writes Mark Diesendorf, Associate Professor of Interdisciplinary Environmental Studies at UNSW Australia. 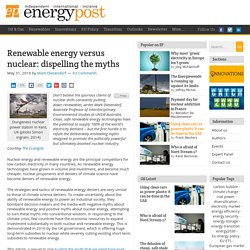 Clean, safe renewable energy technologies have the potential to supply 100% of the world’s electricity demand – but the first hurdle is to refute the deliberately misleading myths designed to promote the politically powerful but ultimately doomed nuclear industry. New finding may hold key to Gaia hypothesis. (Phys.org) -- Is Earth really a sort of giant living organism as the Gaia hypothesis predicts? 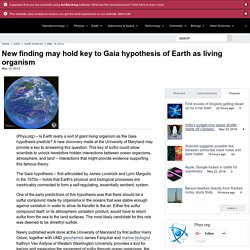 A new discovery made at the University of Maryland may provide a key to answering this question. This key of sulfur could allow scientists to unlock heretofore hidden interactions between ocean organisms, atmosphere, and land -- interactions that might provide evidence supporting this famous theory. Light-driven dinitrogen reduction: Scientists shed new light on global energy, food supply challenge. All living things require nitrogen for survival, but the world depends on only two known processes to break nitrogen's ultra-strong bonds and allow conversion to a form humans, animals and plants can consume. 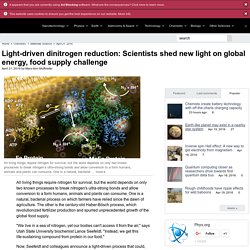 One is a natural, bacterial process on which farmers have relied since the dawn of agriculture. The other is the century-old Haber-Bösch process, which revolutionized fertilizer production and spurred unprecedented growth of the global food supply. "We live in a sea of nitrogen, yet our bodies can't access it from the air," says Utah State University biochemist Lance Seefeldt. Household consumption significant driver of climate, other environmental impacts. You won’t make big cuts in your environmental impact by taking shorter showers or turning out the lights. 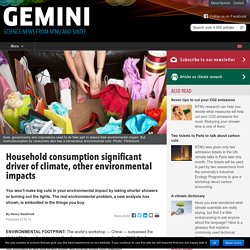 The real environmental problem, a new analysis has shown, is embodied in the things you buy. ENVIRONMENTAL FOOTPRINT: The world’s workshop — China — surpassed the United States as the largest emitter of greenhouse gases on Earth in 2007. Stanford: world can go 100% renewable. Reneweconomy.com A new analysis from Stanford University has laid out a roadmap for 139 countries to power their economies with solar, wind, and hydro energy by 2050. 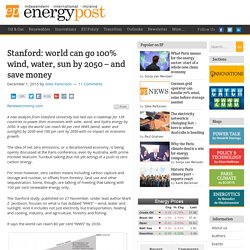 It says the world can reach 80 per cent WWS (wind, water and sunlight) by 2030 and 100 per cent by 2050 with no impact on economic growth. The idea of net zero emissions, or a decarbonised economy, is being openly discussed at the Paris conference, even by Australia, with prime minister Malcolm Turnbull talking (but not yet acting) of a push to zero carbon energy. For most however, zero carbon means including carbon capture and storage and nuclear, or offsets from forestry, land use and other sequestration. Some, though, are talking of meeting that talking with 100 per cent renewable energy only. The Stanford study, published on 27 November, under lead author Mark Z. 5 foods you shouldn't eat if you care about the environment. The Sierra Club has put together a list of “The 5 Worst Foods for Environmentalists to Eat.” 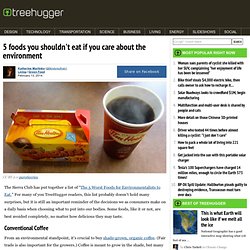 For many of you TreeHugger readers, this list probably doesn’t hold many surprises, but it is still an important reminder of the decisions we as consumers make on a daily basis when choosing what to put into our bodies. Some foods, like it or not, are best avoided completely, no matter how delicious they may taste. Conventional Coffee. The world’s biggest vertical farm is set to soon open in Scranton, Pennsylvania. While the vertical farm, which is scheduled to open in an industrial suburb of Scranton’s Lackawanna County in March, is only a single storey in height, its 3.25 hectares will come equipped with an industrial racking system comprised of four to five levels and will be capable of housing a staggering 17 million plants in total. 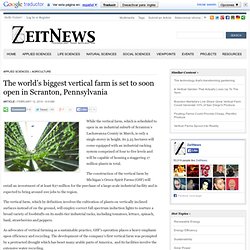 The construction of the vertical farm by Michigan’s Green Spirit Farms (GSF) will entail an investment of at least $27 million for the purchase of a large-scale industrial facility and is expected to bring around 100 jobs to the region. Tree roots in the mountains 'acted like a thermostat' for millions of years. Tree roots in the mountains may play an important role in controlling long-term global temperatures. 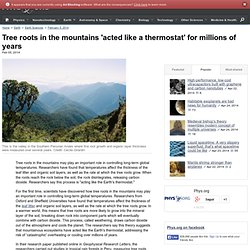 Researchers have found that temperatures affect the thickness of the leaf litter and organic soil layers, as well as the rate at which the tree roots grow. When the roots reach the rock below the soil, the rock disintegrates, releasing carbon dioxide. Researchers say this process is "acting like the Earth's thermostat. " For the first time, scientists have discovered how tree roots in the mountains may play an important role in controlling long-term global temperatures.

Researchers from Oxford and Sheffield Universities have found that temperatures affect the thickness of the leaf litter and organic soil layers, as well as the rate at which the tree roots grow. Vertical farms sprouting all over the world - tech - 16 January 2014. Your Next Tomato Might Be Grown by Air. Despite the cold outside, inside MIT’s CityFarm bell peppers, eggplants, and tomatoes are ripening for an early February harvest. 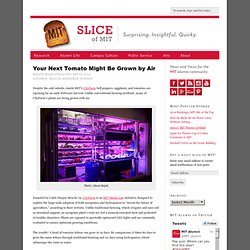 Unlike conventional farming methods, many of CityFarm’s plants are being grown with air. Photo: Aleszu Bajak Founded by Caleb Harper MArch ’14, CityFarm is an MIT Media Lab initiative designed to explore the large-scale adoption of both aeroponics and hydroponics to “invent the future of agriculture,” according to their website. Unlike traditional farming, which irrigates and uses soil as structural support, an aeroponic plant’s roots are fed a mineral-enriched mist and protected in boxlike chambers. Plants are exposed to spectrally-optimized LED lights and are constantly evaluated to ensure optimum growing conditions. The results? Aeroponics uses 98 percent less water than conventional farming, and plants can grow 365 days a year inside and in much smaller areas. The World’s Most Eco-Friendly Car: It’s Made Entirely From HEMP. You would never think that a single plant could solve most of the worlds problems, well it can.

Hemp has over 50, 000 uses, why this plant remains illegal is causing confusion among many. Everything from clothes, medicine, fabrics, fuel and more, hemp is definitely a large threat to a variety of corporations that control energy, health and a number of other industries. Plantagon: The Future of Urban Food. Hemp Box Winter Jam 2013. Rural Hub HempBox: la filiera italiana della Canapa 2.0. Ford Hemp Car: l'auto ecologica esisteva già 70 anni fa. L’Entropia delle Nazioni.