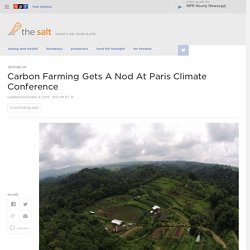 Rain Barrels 101 - Save Our Water. Rainwater Harvesting…Save Water for Your Yard For Californians looking to save water around their yards, rain barrels (or cisterns) can be good options. 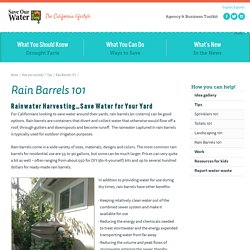 Rain barrels are containers that divert and collect water that otherwise would flow off a roof, through gutters and downspouts and become runoff. Sustainable Development Solutions Network. Embracing Dry Land: Water-Smart Urban Design and Drought in the American West. The great American cities of the desert Southwest were never built on sand. 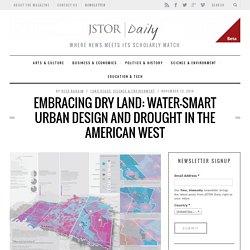 They were built on water. Los Angeles, Phoenix, Las Vegas, and lesser cities such as Tucson have all floated upward over the last century on an illusion that water in the largely arid region could be as plentiful and cheap as it was in the much wetter East. Restoring Ecosystems to Reverse Global Warming. Restoring Ecosystems to Reverse Global Warming Conference at Tufts University, Medford, Massachusetts November 21-23, 2014, details here. 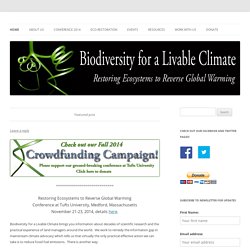 Biodiversity for a Livable Climate brings you information about decades of scientific research and the practical experience of land managers around the world. We work to remedy the information gap in mainstream climate advocacy which tells us that virtually the only practical effective action we can take is to reduce fossil fuel emissions. There is another way. One foundational approach is Holistic Management as applied to billions of acres of grasslands worldwide, which soils have the potential to store enough carbon to reduce atmospheric carbon concentrations significantly. Become a Certified CA Naturalist - California Naturalist. Map Data Map data ©2014 Google, INEGI Locations American River Natural History Association Hopland Research & Extension Center. 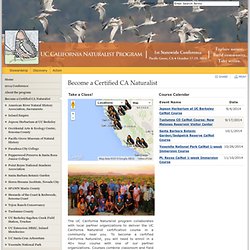 About ioby. Labor of Love: How My WV Small Town Launched a Game-Changing New Model to Go Solar. Energy Storage and Problem Solving. Pick up a research paper on battery technology, fuel cells, energy storage technologies or any of the advanced materials science used in these fields, and you will likely find somewhere in the introductory paragraphs a throwaway line about its application to the storage of renewable energy. 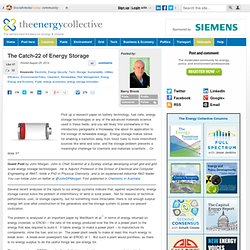 Energy storage makes sense for enabling a transition away from fossil fuels to more intermittent sources like wind and solar, and the storage problem presents a meaningful challenge for chemists and materials scientists… Or does it? Guest Post by John Morgan. John is Chief Scientist at a Sydney startup developing smart grid and grid scale energy storage technologies. He is Adjunct Professor in the School of Electrical and Computer Engineering at RMIT, holds a PhD in Physical Chemistry, and is an experienced industrial R&D leader. You can follow John on twitter at @JohnDPMorgan. Solving the Sacramento-San Joaquin Delta Crisis. Applying Behavioral Strategies to Energy Decisions and Behaviors - American Academy of Arts & Sciences. 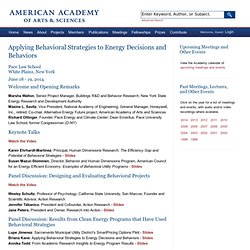 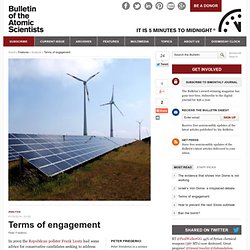 “It’s time for us to start talking about ‘climate change’ instead of global warming,” he wrote in a memo. “‘Climate change’ is less frightening.” More than a decade later, myriad studies have made it more than obvious that human activities are altering the Earth’s climate and disrupting weather patterns, the production of crops, and human health—not in the distant future, but today. The Obama administration has taken some steps in recent months to address the issue. But the American polity as a whole is hardly more serious about addressing this issue than it was during President George W. How Conservation and Groundwater Management Can Gird California for a Drier Era.

Photo It’s way past time for California to come to grips with the possibility that its extraordinary water woes are the new normal — and essentially the return of the old normal given the state’s climate history, in which drought has been the rule and the verdant 20th century the exception. 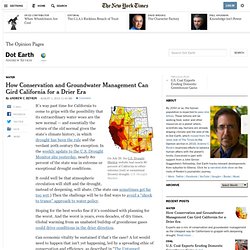 A Joint Program of the Woods Institute for the Environment and the Bill Lane Center for the American West at Stanford University. Now What? Scientists Call for a Better Way to Invest in the Future of Agriculture. Iowa State University, April 2005. 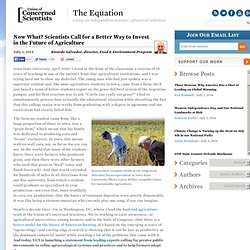 I stood at the front of the classroom, a veteran of 25 years of teaching at one of the nation’s front-line agricultural institutions, and I was trying hard not to show my disbelief. OUR LAND: A Symposium on Farmland Access in the 21st Century. In the next two decades 400 million acres of U.S. farmland will change hands. Will that land be consolidated into larger holdings and treated as a commodity or investment asset? Or will it prove the foundation for a new business, a next-generation farmer, a passionate entrepreneur?

Join us for a weekend program to tackle the historical context, long-range implications and economic impact, and stewardship potential of the transition ahead. Showtime Series Aims to Engage Sleepy Public on Global Warming With Celebrity Guides. The Earth Institute - Columbia University. Stockbridge Green, Architects. About the OECD. Our mission The mission of the Organisation for Economic Co-operation and Development (OECD) is to promote policies that will improve the economic and social well-being of people around the world.The OECD provides a forum in which governments can work together to share experiences and seek solutions to common problems. We work with governments to understand what drives economic, social and environmental change.

We measure productivity and global flows of trade and investment. A New Paradigm Will Help Navigate the Anthropocene : Collide-a-Scape. Tree-Nation » Plant trees for a better planet! Natural Resources and the Environment - Dot Earth Blog - NYTimes.com.