Eiffel tower switches off lights for Earth Hour. The world famous landmark in the City of Light will be one of nearly 400 monuments across France participating in the event - which kicks off at 8:30pm local time tonight. 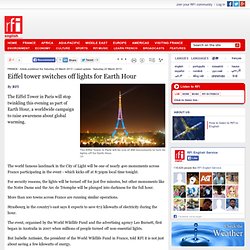 For security reasons, the lights will be turned off for just five minutes, but other monuments like the Notre Dame and the Arc de Triomphe will be plunged into darkness for the full hour. More than 100 towns across France are running similar operations. Activists fear U-turn on French anti-fracking ban - Report: France. An oil company in the Paris area has been building drilling platforms, perhaps in anticipation of this change, which has residents of affected areas worried about the future. 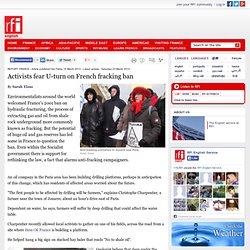 "The first people to be affected by drilling will be farmers," explains Christophe Charpentier, a farmer near the town of Jouarre, about an hour's drive east of Paris. Dependent on water, he says, farmers will suffer by deep drilling that could affect the water table. Charpentier recently allowed local activists to gather on one of his fields, across the road from a site where Hess Oil France is building a platform. Introducing Bioneers 3.0 at Bioneers 2011. Ecosystem Management Applying to Ecosystem Science: I. Robustness and Stability of Organisms and Ecosystems. As a consequence of our increasing use of energy and resources we now face two major challenges: climate change and biodiversity loss. 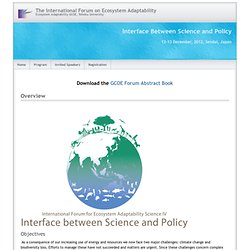 Efforts to manage these have not succeeded and matters are urgent. Since these challenges concern complex eco-systems and human socioeconomic systems, it is important to utilize current scientific knowledge of extant threats to break the political impasse and accelerate the move towards a sustainable world. Several international bodies including the IPCC and IPBES have strengthened the links between science and policy, although progress differs from discipline to discipline.

The aim of this international forum of invited the speakers from various research institutes, international organizations, and NGOs, is to forge stronger links between disciplines. We have selected agriculture, fishing, climate change, biodiversity and other threats as being the topics of most importance. Avalanche alert in French Alps after winter's first snowfall. The Alpine departments of Savoie, Haute-Savoie and Isère were on avalanche alert on Saturday and there were fears of avalanches in the Pyrennees and the Vosges. The sport and interior ministries on Friday evening warned hikers and skiers that “exceptional” snow and high winds have “considerably increased the risk of sudden avalanches” in mountainous areas. Ohio anti-fracking campaigners warn of pollution and earthquakes - Report: United States. "This was a great place to live, but I don't even want to live here anymore, to be honest with you, I don't. 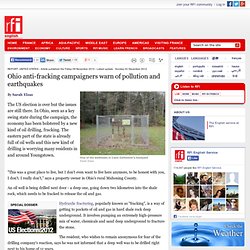 I really don't," says a property owner in Ohio's rural Mahoning County. An oil well is being drilled next door - a deep one, going down two kilometres into the shale rock, which needs to be fracked to release the oil and gas. Hydraulic fracturing, popularly known as "fracking", is a way of getting to pockets of oil and gas in hard shale rock deep underground. French police teargas anti-airport protest. Witnesses say police used pepper grenades and tear gas as well as flashballs, to try to control the situation. 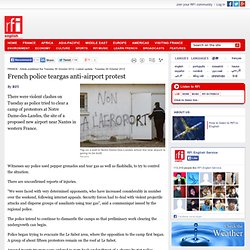 There are unconfirmed reports of injuries. “We were faced with very determined opponents, who have increased considerably in number over the weekend, following internet appeals. Security forces had to deal with violent projectile attacks and disperse groups of assailants using tear gas”, said a communiqué issued by the regional police. Breathalyzer law and minimum wage changes come into force in France - France.

Breathalyzer tests In an attempt to cut back on the number of alcohol-related traffic accidents, each driver will from now on be required to keep a breathalyzer test in his or her vehicle. 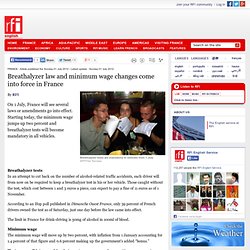 Those caught without the test, which cost between 1 and 3 euros a piece, can expect to pay a fine of 11 euros as of 1 November. According to an Ifop poll published in Dimanche Ouest France, only 39 percent of French drivers owned the test as of Saturday, just one day before the law came into effect. The limit in France for drink-driving is 50mg of alcohol in 100ml of blood. Minimum wage The minimum wage will move up by two percent, with inflation from 1 January accounting for 1.4 percent of that figure and 0.6 percent making up the government’s added “bonus.” The increase will bring monthly salaries up to 9,40 euros per hour, putting 21,40 euros in workers’ pockets each month, after taxes. The measure could cut CO2 emissions by 120,000 tons. Why it is urgent to halt overfishing. 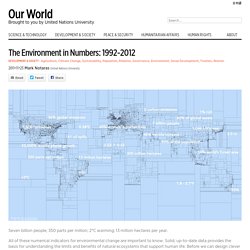 The true value of ecosystem services - OurWorld 2.0. “If nature is really important to human well-being, people wouldn’t be moving into cities in droves, they’d be living in cabins in the woods,” said the economics professor in 1998. 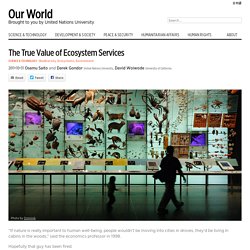