Trees Come 'From Out Of The Air,' Said Nobel Laureate Richard Feynman. Really? : Krulwich Wonders... Ask one of the greatest scientists of the 20th century a simple question, and his answer makes me go, "What? 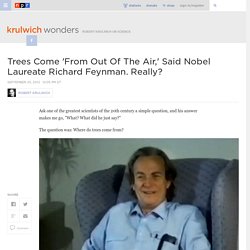 What did he just say? " Neighborhood. Air Pollution. Significant progress has been made in recent years cleaning up outdoor air pollution in the U.S. 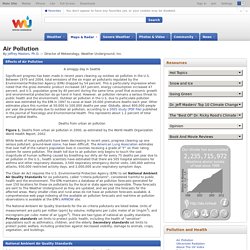 Between 1970 and 2004, total emissions of the six major air pollutants regulated by the Environmental Protection Agency (EPA) dropped by 54 percent. This is particularly impressive when noted that the gross domestic product increased 187 percent, energy consumption increased 47 percent, and U.S. population grew by 40 percent during the same time, proof that economic growth and environmental protection do go hand in hand. However, air pollution remains a serious threat to public health and the environment. Outdoor air pollution in the U.S. due to particulate pollution alone was estimated by the EPA in 1997 to cause at least 20,000 premature deaths each year. Other estimates place this number at 50,000 to 100,000 deaths per year. Figure 1.

Paul Stamets patents “universal biopesticide” that Big Ag calls “the most disruptive technology that we have ever witnessed.” When my boys were young, I once asked each of them what would they ask for if they could have anything in the world. 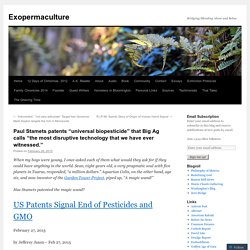 Sean, eight years old, a very pragmatic soul with five planets in Taurus, responded, “a million dollars.” Log In. Log In - The New York Times. Gyres: The terrifying true story of the garbage that could kill the whole human race — Matter. 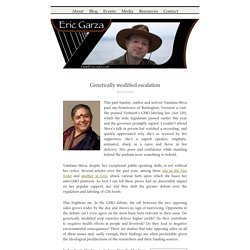 She praised Vermont’s GMO labeling law (Act 120), which the state legislature passed earlier this year and the governor promptly signed. I couldn’t attend Shiva’s talk in person but watched a recording, and quickly appreciated why she’s so revered by her supporters: she’s a superb speaker; emphatic, animated, sharp as a razor and fierce in her delivery. Her poise and confidence while standing behind the podium were something to behold. Vandana Shiva, despite her exceptional public speaking skills, is not without her critics. Several articles over the past year, among them one in the New Yorker and another in Grist, attack various facts upon which she bases her anti-GMO platform. This frightens me. In her book Thinking in Systems, Donella Meadows articulates several traps that individuals and groups can fall into. Your contribution to climate change: see your impact on the Earth's vital signs. As Casualties Mount, Scientists Say Global Warming Has Been "Hugely Underestimated"

(Image: High altitude, air pollution via Shutterstock) As we look across the globe this month, the signs of a continued escalation of the impacts of runaway anthropogenic climate disruption (ACD) continue to increase, alongside a drumbeat of fresh scientific studies confirming their connection to the ongoing human geo-engineering project of emitting carbon dioxide at ever-increasing rates into the atmosphere. 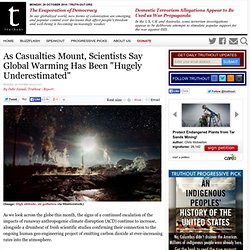 A major study recently published in New Scientist found that "scientists may have hugely underestimated the extent of global warming because temperature readings from southern hemisphere seas were inaccurate," and said that ACD is "worse than we thought" because it is happening "faster than we realized. " GMOs Are Old Hat. Synthetically Modified Food Is The New Frontier.

The vanillin made through synthetic biology will be used in flavorings sold in the U.S. by International Flavorings & Fragrances. 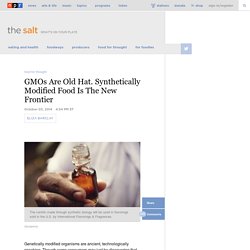 iStockphoto hide caption itoggle caption iStockphoto. Stunning before and after images of California's drought. California is currently suffering through its worst drought in at least a century, with 82 percent of the state facing "extreme" or "exceptional" drought. 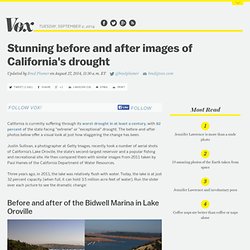 The before-and-after photos below offer a visual look at just how staggering the change has been. Justin Sullivan, a photographer at Getty Images, recently took a number of aerial shots of California's Lake Oroville, the state's second-largest reservoir and a popular fishing and recreational site. He then compared them with similar images from 2011 taken by Paul Hames of the California Department of Water Resources. Another Field Contaminated with Unapproved GE Wheat. (Beyond Pesticides, October 1, 2014) Just after announcing a close to its investigation into the illegal presence of genetically engineered (GE) wheat in Oregon, finding it to be an “isolated incident,” the U.S. 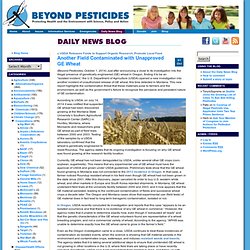 Department of Agriculture (USDA) opened a new investigation into another incident of unauthorized release of GE wheat, this time detected in Montana. This new report highlights the contamination threat that these materials pose to farmers and the environment, as well as the government’s failure to recognize the pervasive and persistent nature of GE contamination.

According to USDA, on July 14, 2014 it was notified that suspected GE wheat had been discovered growing at the Montana State University’s Southern Agricultural Research Center (SARC) in Huntley, Montana, where Monsanto and researchers grew GE wheat as part of field trials between 2000 and 2003.