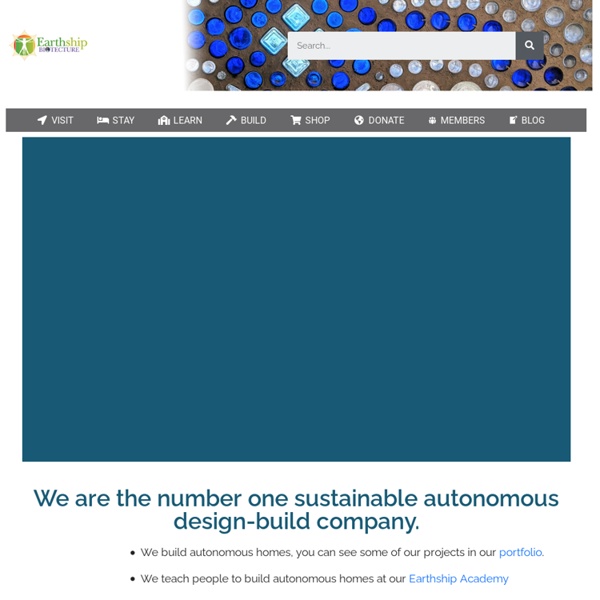 Earthship South and East view of an Earthship passive solar home Earthship typical floorplan Earthships are primarily designed to work as autonomous buildings using thermal mass construction and natural cross ventilation assisted by thermal draught (Stack effect) to regulate indoor temperature. Earthships are generally off-the-grid homes, minimizing their reliance on public utilities and fossil fuels. Earthships are built to utilize the available local resources, especially energy from the sun. Vertical farms sprouting all over the world - tech - 16 January 2014 Leader: "Fruit and veg, fresh from the skyscraper" URBAN warehouses, derelict buildings and high-rises are the last places you'd expect to find the seeds of a green revolution. But from Singapore to Scranton, Pennsylvania, "vertical farms" are promising a new, environmentally friendly way to feed the rapidly swelling populations of cities worldwide. In March, the world's largest vertical farm is set to open up shop in Scranton.

Climate Change, Deforestation, Biomes and Ocean Currents, Plankton, Endangered Species - Earth Web Site Click for more detail Thermohaline Change Evidence is growing that the thermohaline current may be slowed or stopped by cold fresh water inputs to the Arctic and North Atlantic oceans. This could occur if global warming is sufficient to cause large scale melting of arctic sea ice and the Greenland ice sheet. Such a change in the current may be gradual (over centuries) or very rapid (over a few years). Either would cause planet wide changes in climate. This effect may be part of what starts and stops the ice ages.

The Zero-carbon Underground Eco Home This new, flower-shaped 8,000 square foot house, which is being built for soccer star Gary Neville by Make Architects, is promising to be zero-carbon. Here's how they say they're going to fulfill that promise: It's underground, which will keep it cool in summer, a ground-source heat pump will provide heat, and energy comes from solar panels and an on-site wind turbine. Lots of skylights obviate the need for electricity during the day, and building materials will be local and sustainable. Hobbit Houses: 15 Grassy Hill-Shaped Dwellings “In a hole in a ground lived a hobbit. Not a nasty, dirty, wet hole, filled with the ends of worms and an oozy smell, nor yet a dry, bare, sandy hole with nothing to sit on or eat: It was a hobbit hole and that means comfort.” This line by J.R.R. Tolkien, author of the beloved The Hobbit and Lord of the Rings fantasy novels, has inspired hundreds of copycat underground hobbit homes around the world – and is itself inspired by ancient Viking hill houses. These 15 green-roofed dwellings that take a page right out of Tolkien’s books come in all sizes for all kinds of functions, from hotels in New Zealand to backyard playhouses and vintage underground hill-dug duplexes. The World’s First Hobbit Motel

This Zero-Energy Building Uses Algae for Power and Shade In a little over a month, a new German building will be the first in the world to have a "bioreactor facade" that can create energy, provide shade, and control light. The walls facing the sun are lined with giant glass panels that act as microalgae farms: fed with water and sunlight, the tiny plants grow until they're big enough to be harvested and sent to a nearby biogas plant to generate energy. The glass panels are also designed to capture the warmth of the sun to heat the building and provide hot water. Excess heat can even be stored in the ground as geothermal energy.

The World’s Most Eco-Friendly Car: It’s Made Entirely From HEMP You would never think that a single plant could solve most of the worlds problems, well it can. Hemp has over 50, 000 uses, why this plant remains illegal is causing confusion among many. Everything from clothes, medicine, fabrics, fuel and more, hemp is definitely a large threat to a variety of corporations that control energy, health and a number of other industries. Many corporations would see a decline in profit if hemp were to be legalized. One in particular this article will focus on is the automobile industry.

Global risks: Interactive map shows climate issues rising An overly simplistic view of global economics has fuelled climate denial and skepticism for decades. Some opponents of climate change mitigation policies argue that achieving any progress would require an impossible retrofitting of our economy and result in lower profits and fewer jobs. In reality, in many ways, climate action will help businesses be more resilient in tomorrow’s economy. Interestingly, the rapid and widespread outbreak of COVID-19 has given the world an opportunity to test the hypothesis of whether and how an economic shutdown might affect climate outcomes. Initial data suggests that 2020 annual emissions could decrease by as much as seven percent globally due to the downward shift in energy demand worldwide.