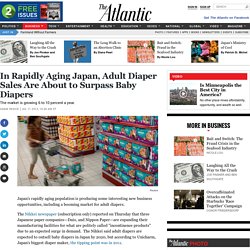 The Nikkei newspaper (subscription only) reported on Thursday that three Japanese paper companies—Daio, and Nippon Paper—are expanding their manufacturing facilities for what are politely called "incontinence products" due to an expected surge in demand. The Nikkei said adult diapers are expected to outsell baby diapers in Japan by 2020, but according to Unicharm, Japan's biggest diaper maker, the tipping point was in 2011. The adult diaper market is growing at 6-10 percent a year, and already pulls in 140 billion yen ($1.4 billion) by catering to Japan's elderly population—it has the highest percentage of over-65s in the world, making up more than 20 percent of the population. Sweden's SCA, the world's biggest hygiene product maker, recently sent a sample of its adult diapers to every Swedish man over the age of 55. The World’s Biggest Debtor Nations. Throughout the financial crisis, many national economies have looked to their government and foreign lenders for financial support, which translates to increased spending, borrowing and in most cases, growing national debt. 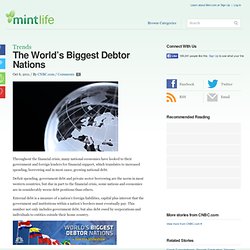 Deficit spending, government debt and private sector borrowing are the norm in most western countries, but due in part to the financial crisis, some nations and economies are in considerably worse debt positions than others. External debt is a measure of a nation’s foreign liabilities, capital plus interest that the government and institutions within a nation’s borders must eventually pay. This number not only includes government debt, but also debt owed by corporations and individuals to entities outside their home country. So, how does the US debt position compare to that of other countries?

A useful measure of a country’s debt position is by comparing gross external debt to GDP. So, what are the world’s biggest debtor nations? De Stand van het Land. We Grew Up Too Comfortable to Take Risks. By now, the images associated with Japan's global pop hipster juggernaut are news to no one. 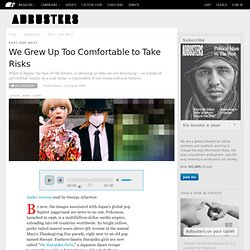 Pokemon, launched in 1996, is a multibillion-dollar media empire, extending into 68 countries worldwide. Its bright yellow, perky-tailed mascot soars above 5th Avenue in the annual Macy's Thanksgiving Day parade, right next to an old pup named Snoopy. Fashion-fanatic Harajuku girls are now called "the Harajuku Girls," a Japanese dance troupe touring the world and gyrating in sold-out stadiums alongside a blonde singer named Gwen Stefani. Hello Kitty manufacturer Sanrio's overseas outlets frequently outperform their domestic counterparts, and anime- and manga-devoted clubs and conventions have sprouted and bloomed in foreign soils like Takashi Murakami's psychedelic smiley-faced flowers. "There doesn't seem to be much optimism," says literary translator, author and University of Tokyo professor Motoyuki Shibata. It's not hard to find pessimism about the young pessimists.

European Capability for Situation Awareness program to monitor Internet access around the world. Photo by KHALIL MAZRAAWI/AFP/Getty Images Keeping track of the avalanche of reports about new mass surveillance initiatives and Internet freedom crackdowns can be a difficult task. 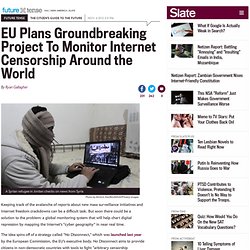 But soon there could be a solution to the problem: a global monitoring system that will help chart digital repression by mapping the Internet’s "cyber geography" in near real time. The idea spins off of a strategy called “No Disconnect,” which was launched last year by the European Commission, the EU’s executive body. No Disconnect aims to provide citizens in non-democratic countries with tools to fight “arbitrary censorship restrictions and protect against illegitimate surveillance.” It was largely inspired by the indiscriminate spying, tracking, and Web filtering exposed during the Arab Spring in countries such as Syria and Libya, sometimes assisted by Western technology firms. Now, the team behind the strategy are building what they call a “European Capability for Situational Awareness.” Retail. Oscarh I am surprised only 70% live in the cities by 2050. 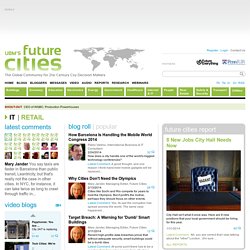 What about the other 30%? What are the ratio now? 50/50? Helen_crestin I lived in HK before and I have to agreed that their internet coverage is awesome. You could basically get wifi connection anywhere in the city. Ljdofijwepfjodf Agent Stacy Kelly: "Keep your pipeline stuffed so that when a deal falls through, you haven't put all your eggs into that basket for the month! " jerryissac77 totally agreed with your ISP provider thing. Paulmiller321 The job markets are getting much better now. Marcalec Some record shops these days also sell music instruments along with the records, they bring a lot of customers in. Rubina2013 Yes, its sad the corruption has spread accross the world.