Tzeporah Berman on resisting climate change: ‘We’re living at a tipping point’ Possible Canadas is a project created by Reos Partners and a diverse coalition of philanthropic and community organizations. 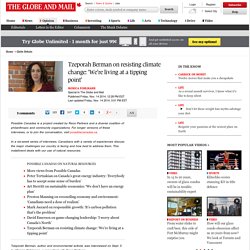 For longer versions of these interviews, or to join the conversation, visit possiblecanadas.ca. In a six-week series of interviews, Canadians with a variety of experiences discuss the major challenges our country is facing and how best to address them. This installment deals with our use of natural resources. Tzeporah Berman, author and environmental activist, was interviewed on Sept. 5 by Monica Pohlmann, a consultant with Reos Partners. Pohlmann: What keeps you up at night? Here Comes Another Corporatized Climate Summit. UN meeting again corroded by big business influence. 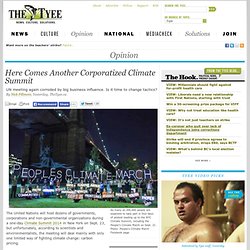 Is it time to change tactics? As many as 200,000 people are expected to take part in four days of protest leading up to the NYC Climate Summit, including the People's Climate March on Sept. 21. Photo: People's Climate March Facebook page. The United Nations will host dozens of governments, corporations and non-governmental organizations during a one-day Climate Summit 2014 in New York on Sept. 23, but unfortunately, according to scientists and environmentalists, the meeting will deal mainly with only one limited way of fighting climate change: carbon pricing. In recent years the UN has proven incapable of playing an important role in slowing world climate change in a meaningful way. Because the UN and governments are not making progress, as many as 200,000 environmental supporters from all over North America are expected to take part in four days of protest in New York leading up to the UN summit.

Canadian economy will lose billions to climate change: report. A new report on the financial implications of climate change notes that while natural catastrophes are estimated to cost Canadians $21-$43 billion per year by 2050, popular economic measures like GDP fail to capture the escalation, discouraging preventative investment. 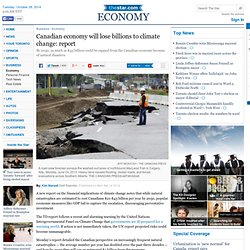 The TD report follows a recent and alarming warning by the United Nations Intergovernmental Panel on Climate Change that governments are ill-prepared for a warming world. If action is not immediately taken, the UN report projected risks could become unmanageable. Monday’s report detailed the Canadian perspective on increasingly frequent natural catastrophes — the average number per year has doubled over the past three decades — and how by 2020 they will sap an estimated $5 billion from the economy. “The reality is that the frequency of weather events has increased,” said lead author and TD economist Craig Alexander. Why I Bought A House In Detroit For $500. Fukushima's Radiation: BC Health Risk, or Fish Tale? Province's public health officer still combating what he says are unnecessary alarms. 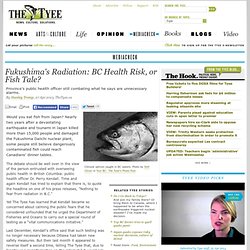 Would you eat fish from Japan? Nearly two years after a devastating earthquake and tsunami in Japan killed more than 15,000 people and damaged the Fukushima Daiichi nuclear plant, some people still believe dangerously contaminated fish could reach Canadians' dinner tables. The debate should be well over in the view of the person entrusted with overseeing public health in British Columbia: public health officer Dr. Perry Kendall. Time and again Kendall has tried to explain that there is, to quote the headline on one of his press releases, "Nothing to fear from radiation in B.C. " Yet The Tyee has learned that Kendall became so concerned about calming the public fears that he considered unfounded that he urged the Department of Fisheries and Oceans to carry out a special round of testing as a "vital communications initiative.

" What Could Disappear. Green Jobs BC. Is the U.S. finally going to move on the climate crisis? – elizabethmaymp.ca – February 14. When a situation is as desperate as the climate crisis and yet, year after year, no leadership emerges, it is hard to believe that the situation may be changing. 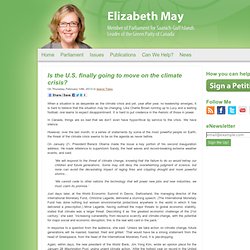 Like Charlie Brown running up to Lucy and a waiting football, one learns to expect disappointment. It is hard to put credence in the rhetoric of those in power. In Canada, things are so bad that we don’t even have hypocritical lip service to the crisis. We have silence. However, over the last month, in a series of statements by some of the most powerful people on Earth, the threat of the climate crisis seems to be on the agenda as never before.

On January 21, President Barack Obama made the issue a key portion of his second inauguration address. About. TransCanada, a multinational corporation, is building the Keystone XL tar sands pipeline through Oklahoma and Texas to the Gulf. 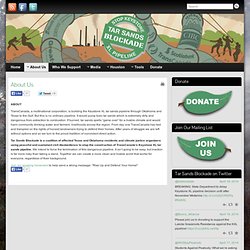 But this is no ordinary pipeline. It would pump toxic tar sands which is extremely dirty and dangerous from extraction to combustion. If burned, tar sands spells “game over” for a livable climate and would harm community drinking water and farmers’ livelihoods across the region. From day one TransCanada has lied and trampled on the rights of honest landowners trying to defend their homes.

After years of struggle we are left without options and so we turn to the proud tradition of nonviolent direct action. Tar Sands Blockade is a coalition of affected Texas and Oklahoma residents and climate justice organizers using peaceful and sustained civil disobedience to stop the construction of TransCanada’s Keystone XL tar sands pipeline. ForestEthics.