Masdar Helps Oman Prepare for the Post-Oil Era With the Gulf's First Wind Farm. The Sultanate of Oman is building the largest wind farm in the Gulf States region. 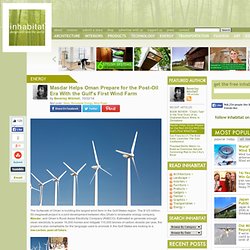 The $125 million, 50-megawatt project is a joint development between Abu Dhabi’s renewable energy company, Masdar, and Oman’s Rural Areas Electricity Company (RAECO). Estimated to generate enough clean electricity to power 16,000 homes and mitigate 110,000 tonnes of carbon dioxide per year, the project is also remarkable for the language used to promote it: the Gulf States are looking to a low-carbon, post-oil future. The project will consist of up to 25 wind turbines and construction will begin in the final quarter of 2015. 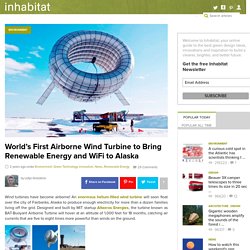 An enormous helium-filled wind turbine will soon float over the city of Fairbanks, Alaska to produce enough electricity for more than a dozen families living off the grid. Designed and built by MIT startup Altaeros Energies, the turbine known as BAT-Buoyant Airborne Turbine will hover at an altitude of 1,000 feet for 18 months, catching air currents that are five to eight times more powerful than winds on the ground. Large wind farms floating over major cities may seem like something from a sci-fi movie, but the concept of airborne wind turbines is close to becoming reality. Altaeros has already built the world’s highest turbine that can generate twice the energy output of its ground-based counterpart. Besides generating power, these floating power plants can provide data coverage, cell service and local weather data and can be deployed in harsh weather conditions.

Related:Altaeros Energies’ Floating Wind Turbines Tap Into Strong High Altitude Winds. Customised log homes designed for your needs. Renovated Israeli Penthouse With Lavish Balcony Space. Most of us stuck in tall skyscrapers and apartments do not have the luxury of dreaming about an extravagant and spacious outdoor living space or balcony. 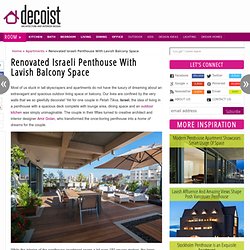 Our lives are confined by the very walls that we so gleefully decorate! Yet for one couple in Petah Tikva, Israel, the idea of living in a penthouse with a spacious deck complete with lounge area, dining space and an outdoor kitchen was simply unimaginable. The couple in their fifties turned to creative architect and interior designer Amir Golan, who transformed the once-boring penthouse into a home of dreams for the couple. While the interior of the penthouse apartment spans a bit over 150 square meters, the large outdoor balcony occupies a lavish 100 square meters and extends the living area outdoors with ease. Suburban Sydney House Offers A Tranquil Lifestyle That is Close To Nature. The modern urban trend is to make use of every inch of available space, and most homeowners do believe that bigger is indeed better. 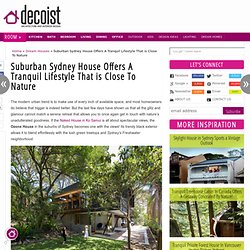 But the last few days have shown us that all the glitz and glamour cannot match a serene retreat that allows you to once again get in touch with nature’s unadulterated goodness. If the Naked House in Ko Samui is all about spectacular views, the Ozone House in the suburbs of Sydney becomes one with the views! Its trendy black exterior allows it to blend effortlessly with the lush green treetops and Sydney’s Freshwater neighborhood. With an unabated view of the majestic valley below, this cool home was once a simple cottage that needed an extension and revamp, thanks to the growing needs of the family. In came architect Matt Elkan, who transformed the space while keeping the cozy cottage style firmly intact. An open living area with a spacious dining room to entertain guests and a lovely kitchen with ample ventilation defines the house.

Eco-Friendly Home In Dominican Republic Promises Luxury In The Lap Of Nature. The surging wave of sustainable design and eco-conscious homes has seen architects come up with some of the most innovative and amazing homes in the last few years. 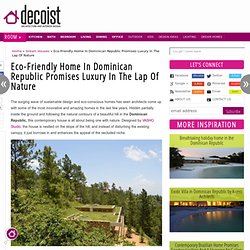 Hidden partially inside the ground and following the natural contours of a beautiful hill in the Dominican Republic, this contemporary house is all about being one with nature. Designed by VASHO Studio, the house is nestled on the slope of the hill, and instead of disturbing the existing canopy, it just burrows in and enhances the appeal of the secluded niche. In fact, one would be hard pressed to spot the house from a distance. Sustainable Style Meets Eco-Friendly Design At Atelier Akeef. Floating city of the future could be built off Hong Kong coast.

Floating City dreamed up by British and Asian designers showing what cities of the future could look likeWould feature farms, docks, canals, a hotel, entertainment complex and a huge floating stadium for sportsMetropolis made from hexagonal and triangular modules which attach with underground walkways and tunnels By Chris Pleasance Published: 10:12 GMT, 28 May 2014 | Updated: 12:05 GMT, 28 May 2014. 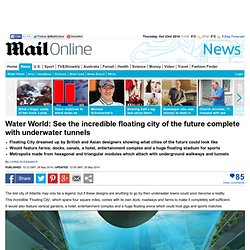 Solar Roadways - Introduction. We are excited to announce that Indiegogo has asked us to join their InDemand program: It allows teams to continue raising funds for their projects. 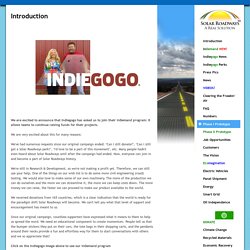 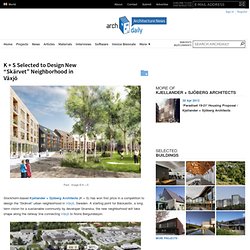 A starting point for Bäckaslöv, a long term vision for a sustainable community by developer Skanska, the new neighborhood will take shape along the railway line connecting Växjö to Norra Bergundasjon. Timber facades, varying in color and texture, will be anchored by ground floor commercial space and provide up to 190 residential units, elderly housing and a school, all of which will be centered around an existing, forested park. “The block is given a unique urban character, combined with a small-scale, diverse architectural timber expression,” described K+S. “Innovative, yet proven solutions, enable the spaces to be inhabited to their full potential across the hours of the day,” added K+S.

US Department of Agriculture Launches $2 Million Tall Wood Building Prize Competition. Among the changes in material technology that are constantly altering the architectural landscape, one of the most popular – and most dramatic – is the idea of the timber skyscraper. 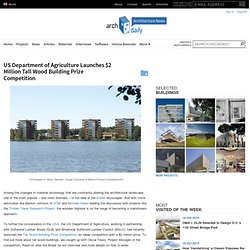 Roll with it: hire a campervan. Sustainable, inspiring garden & home products. Google Street View Enters Gombe National Park. Film: Time-lapse film of a coral reef = mind blown. 8 Awkward Things You Might Do If You've Truly Gone Green. Look, I am all about going way out of my way to save the planet. 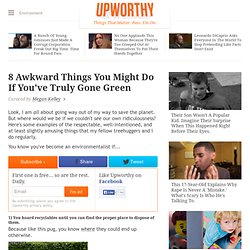 But where would we be if we couldn't see our own ridiculousness? Here's some examples of the respectable, well-intentioned, and at least slightly amusing things that my fellow treehuggers and I do regularly. You know you've become an environmentalist if... 1) You hoard recyclables until you can find the proper place to dispose of them. Because like this pug, you know where they could end up otherwise. 2) You carry so many reusable bags with you that you've become a bag lady. People's Climate March – NYC March. There are several different bodies that are convening to collaborate on the People’s Climate March, including local New York-area community groups, international NGO’s, grassroots networks, churches and faith organizations, and many more. You can see a list of participating organizations here.

Because this is a “movement of movements” moment, the People’s Climate March is being organized in a participatory, open-source model. This means that there isn’t a central “decision-making” body or single coalition. Rather, groups and individuals are collaborating with some basic shared agreements around respect, collaboration, trust, and many are using the Jemez Principles of Environmental Justice.

Being The Smallest Is Very Bad In This Case. It Means You're Gonna Be The First One To Drown. About The Water Tank Project.