Safeguarding food production against climate change needs urgent measures. Rising temperatures are sure to have a big impact on China’s grain output and food security over the next 20 to 50 years. 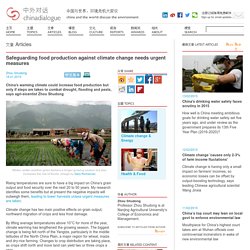 My research identifies some benefits but at present the negative impacts will outweigh them, leading to lower harvests unless urgent measures are taken. Climate change has two main positive effects on grain output; northward migration of crops and less frost damage. By lifting average temperatures above 10°C for more of the year, climate warming has lengthened the growing season. The biggest change is being felt north of the Yangtze, particularly in the middle latitudes of the North China Plain, a major region for wheat, maize and dry-rice farming. Changes to crop distribution are taking place, as crops shift north and more land can yield two or three crops a year. 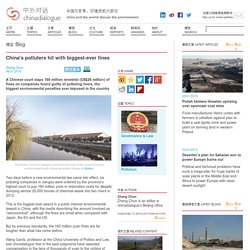 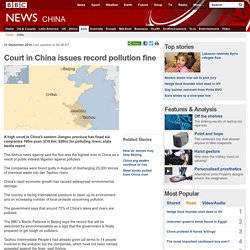 The Xinhua news agency said the fine was the highest ever in China as a result of public interest litigation against polluters. The companies were found guilty in August of discharging 25,000 tonnes of chemical waste into two Taizhou rivers. China's rapid economic growth has caused widespread environmental damage. The country is facing international pressure to clean up its environment and an increasing number of local protests concerning pollution. The government says that around 70% of China's lakes and rivers are polluted. Climate targets will drive sustainable development, says China’s chief climate negotiator. Reporter (R): China and the US have reached consensus on emissions targets. 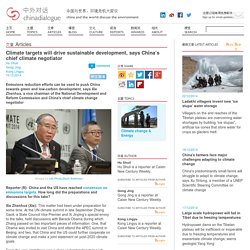 How long did the preparations and discussions for this take? Xie Zhenhua (Xie): This matter had been under preparation for some time. At the UN climate summit in late September Zhang Gaoli, a State Council Vice Premier and Xi Jinping’s special envoy to the talks, held discussions with Barack Obama during which Zhang passed on two important pieces of information: One, that Obama was invited to visit China and attend the APEC summit in Beijing; and two, that China and the US could further cooperate on climate change and make a joint statement on post-2020 climate goals. US–China agreement presages a change in the air. Author: Frank Jotzo, ANU The joint Chinese–American announcement of emissions targets brings the world a big step closer to meaningful post-2020 action on climate change. 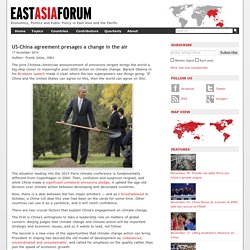 Barack Obama in his Brisbane speech made it clear where the two superpowers see things going: ‘If China and the United States can agree on this, then the world can agree on this’. The situation leading into the 2015 Paris climate conference is fundamentally different from Copenhagen in 2009. Then, confusion and suspicion reigned, and while China made a significant unilateral emissions pledge, it upheld the age-old division over climate action between developing and developed countries.

India can’t follow China’s emissions pledge, says official. India will not be able to follow China into a firm commitment on peaking emissions, a senior Indian negotiator has said in the wake of a major Sino-US announcement on climate change today. 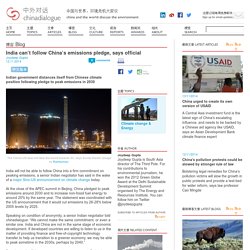 At the close of the APEC summit in Beijing, China pledged to peak emissions around 2030 and to increase non-fossil fuel energy to around 20% by the same year. The statement was coordinated with the US announcement that it would cut emissions by 26-28% below 2005 levels by 2025. Speaking on condition of anonymity, a senior Indian negotiator told chinadialogue: “We cannot make the same commitment, or even a similar one. Farming on Water to Prevent the Effects of Climate Change.

Photo CHARBHANGURA, Bangladesh — Each year the brown waters of the Gumani river swell during the summer monsoon, creeping over the surrounding fields to flood Charbhangura, a village of 2,500 people in the Pabna district of northwest Bangladesh. 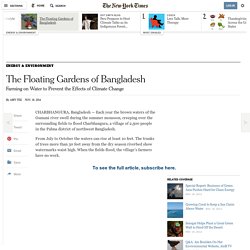 From July to October the waters can rise at least 10 feet. The trunks of trees more than 30 feet away from the dry season riverbed show watermarks waist high. When the fields flood, the village’s farmers have no work. “There is water all around,” said Hafiza Khatun, 25, a mother of two whose family income used to vanish for six months of the year when her farm laborer husband had nothing to do.

But three years ago, Ms. Vital Signs of the Planet: Causes. Most climate scientists agree the main cause of the current global warming trend is human expansion of the "greenhouse effect"1 — warming that results when the atmosphere traps heat radiating from Earth toward space. 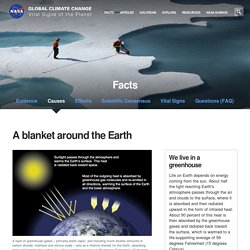 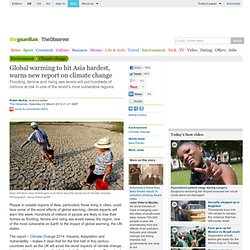 Photograph: Jiang Kehong/AP People in coastal regions of Asia, particularly those living in cities, could face some of the worst effects of global warming, climate experts will warn this week. Hundreds of millions of people are likely to lose their homes as flooding, famine and rising sea levels sweep the region, one of the most vulnerable on Earth to the impact of global warming, the UN states. Water Pressures in Central Asia. Europe and Central Asia Report N°233 11 Sep 2014 Water has long been a major cause of conflict in Central Asia. 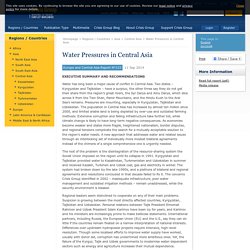 Water Pressures in Central Asia. Look to Variability, Not Just Scarcity, for Water Conflict Clues « The Center for Climate & Security. Water Wars. Right as the West is tightening the screws on Russia's energy sector, Vladimir Putin is accelerating his own pivot to the east, moving closer to another giant natural gas deal with China. If consummated this fall, the multibillion-dollar deal would at least partially alleviate Russia's fears about finding future markets for its gas exports and China's worries over finding future energy supplies, especially natural gas, for its growing economy and population. My Name Is China, and I Have a Pollution Problem. Docs.house.gov/meetings/SY/SY18/20131211/101589/HHRG-113-SY18-Wstate-TitleyD-20131211.pdf. A Clear and Present Danger. Barack Obama's administration says that climate change poses a clear and present danger to the United States that will only grow worse over time as droughts, floods, and storms become part of everyday life throughout the country.