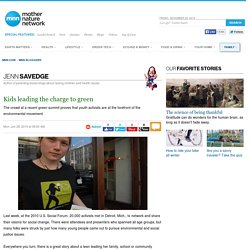 Social Forum, 20,000 activists met in Detroit, Mich., to network and share their visions for social change. There were attendees and presenters who spanned all age groups, but many folks were struck by just how many young people came out to pursue environmental and social justice issues. Everywhere you turn, there is a great story about a teen leading her family, school or community towards environmental and social awareness.

No doubt about it, today's teens are more plugged in to eco-issues than ever before. Thanks to the Internet and other forms of social media, teens have found an instant platform to help them make a difference. Take for example, 18-year-old Tiffany Ng of the Common Roots Program of the Chinese Progressive Association of San Francisco (CPAS). And this type of teen activism is certainly not limited to those attending the Detroit Forum. Young Activist. Where does one of the most powerful young women in America live? 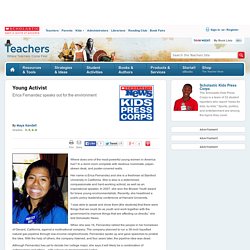 In a dorm room complete with studious roommate, paper-strewn desk, and poster-covered walls. Her name is Erica Fernandez and she is a freshman at Stanford University in California. She is also is a determined, compassionate and hard-working activist, as well as an inspirational speaker. In 2007, she won the Brower Youth award for brave young environmentalists. Recently, she headlined a public policy leadership conference at Harvard University. “I was able to speak and show them [the students] that there were things that we could do as youth and work together with the government to improve things that are affecting us directly,” she told Scholastic News. When she was 16, Fernandez rallied the people in her hometown of Oxnard, California, against a multinational company. “I want to focus on helping communities—minorities especially—and I also want to study international law,” she said. 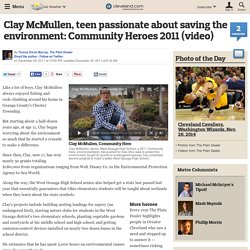 Like a lot of boys, Clay McMullen always enjoyed fishing and rock-climbing around his home in Geauga County's Chester Township. But starting about a half-dozen years ago, at age 11, Clay began worrying about the environment so much that he started a crusade to make a difference. Since then, Clay, now 17, has won nearly 50 grants totaling $180,000 from organizations ranging from Walt Disney Co. to the Environmental Protection Agency to Sea World. Along the way, the West Geauga High School senior also helped get a state law passed last year that essentially guarantees that Ohio elementary students will be taught about wetlands when they learn about the state symbols. 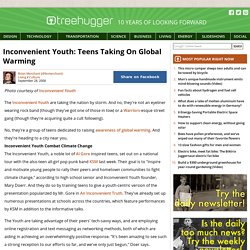 And no, they're not an eyeliner wearing rock band (though they've got one of those in tow) or a Warriors-esque street gang (though they're acquiring quite a cult following). No, they're a group of teens dedicated to raising awareness of global warming. And they're heading to a city near you.Inconvenient Youth Combat Climate ChangeThe Inconvenient Youth, a noble lot of Al Gore inspired teens, set out on a national tour with the also-teen all-girl pop punk band KSM last week. Their goal is to "inspire and motivate young people to rally their peers and hometown communities to fight climate change," according to high school senior and Inconvenient Youth founder, Mary Doerr. The Youth are taking advantage of their peers' tech-savvy ways, and are employing online registration and text messaging as networking methods, both of which are aiding in achieving an overwhelmingly positive response. 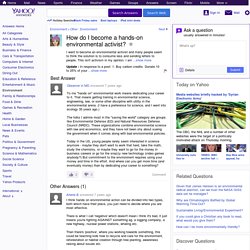 There is what I call 'negative' which doesn't mean i think it's bad, it just means you're fighting AGAINST something eg. a logging company, a new highway, nuclear power stations, whaling etc. Then there's 'positive', where you working towards something, this could be teaching kids how to recycle and care for the environment, reforestation or habitat creation through tree planting, awareness raising about issues etc. 'Negative' types can be unrewarding and exhausting, but when there are occasional victories, they feel really good. eg. you might chain yourself to a bulldozer to delay a logging company, you get muddy and tired, you're arrested and have to pay a fine, then it gets logged anyway. Joining others is the best. Even if you live in a small country town there may be a small local group working on a local issue you could join. p.s.