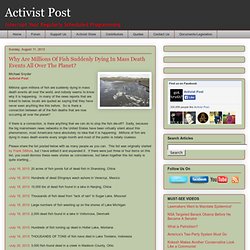 In many of the news reports that are linked to below, locals are quoted as saying that they have never seen anything like this before. So is there a connection between all of the fish deaths that are now occurring all over the planet? If there is a connection, is there anything that we can do to stop the fish die-off?

Sadly, because the big mainstream news networks in the United States have been virtually silent about this phenomenon, most Americans have absolutely no idea that it is happening. Please share the list posted below with as many people as you can. -July 18, 2013: 20 acres of fish ponds full of dead fish in Shandong, China. Fish deaths in Olway Brook, Llansoy, are investigated. Insight: As Congress looks away, U.S. tiptoes toward exporting a gas bounty. Videos. Coral reefs heading for fishing and climate crisis.

23 February 2011Last updated at 14:37 By Richard Black Environment correspondent, BBC News Healthy coral reefs provide a living for about 275 million people, with many more dependent on them Three-quarters of the world's coral reefs are at risk due to overfishing, pollution, climate change and other factors, says a major new assessment. 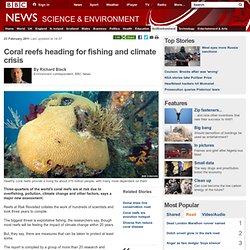 Reefs at Risk Revisited collates the work of hundreds of scientists and took three years to compile. The biggest threat is exploitative fishing, the researchers say, though most reefs will be feeling the impact of climate change within 20 years. But, they say, there are measures that can be taken to protect at least some. Continue reading the main story “Start Quote If we don't learn from these successes then I think that in 50 years' time, most reefs will be gone” End QuoteDr Mark SpaldingThe Nature Conservancy The report is compiled by a group of more than 20 research and conservation organisations, led by the World Resources Institute (WRI) in Washington DC. 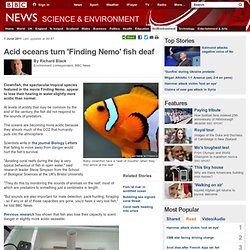 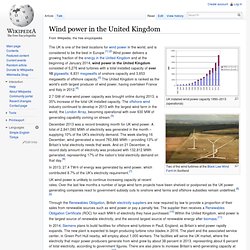 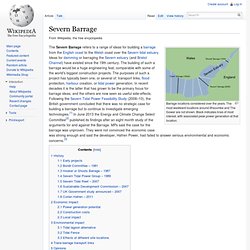 The most westward locations around Ilfracombe and The Gower are not shown. Severn tidal barrage axed as nuclear power plants proposed - News. The UK has scrapped plans for a £30 billion Severn tidal project, claiming it would be 'very costly to deliver and very challenging to attract the necessary investment from the private sector alone'. 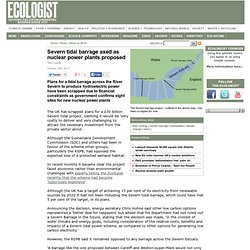 Although the Sustainable Development Commission (SDC) and others had been in favour of the scheme other groups, particularly the RSPB, had opposed the expected loss of a protected wetland habitat. In recent months it became clear the project faced economic rather than environmental challenges with experts telling the Ecologist recently that the scheme had become 'ludicrously expensive'. Tidal power. There have been plans for a "Severn Barrage" from Brean Down in Somerset to Lavernock Point in Wales. 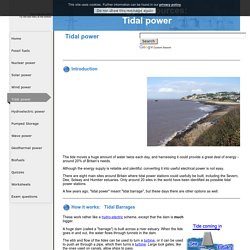 Every now and again the idea gets proposed, but nothing has been built yet. It would cost at least £15 billion to build, but other figures about the project seem to vary depending on where you look. For example, one source says the Severn Barrage would provide over 8,000 Megawatts of power (that's over 12 nuclear power station's worth), another says it would be equivalent to 3 nuclear power stations. The variation in the numbers is because there are several different Severn Barrage projects being proposed, so be careful about which numbers you quote if you're a student researching this topic. There would be a number of benefits, including protecting a large stretch of coastline against damage from high storm tides, and providing a ready-made road bridge.

Find out more at: Breathingearth - CO2, birth & death rates by country, simulated real-time. SmartPlanet - We Make You Smarter - People, Business & Technology. ‪LISTEN TO YOUR HEART ~ Mike Rowland‬‏ Ecology Drives the Worldwide Distribution of Human Diseases. Identifying the factors underlying the origin and maintenance of the latitudinal diversity gradient is a central problem in ecology, but no consensus has emerged on which processes might generate this broad pattern. 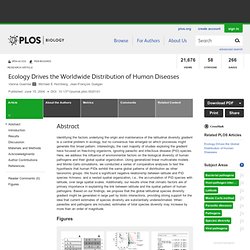 Interestingly, the vast majority of studies exploring the gradient have focused on free-living organisms, ignoring parasitic and infectious disease (PID) species. Here, we address the influence of environmental factors on the biological diversity of human pathogens and their global spatial organization. Using generalized linear multivariate models and Monte Carlo simulations, we conducted a series of comparative analyses to test the hypothesis that human PIDs exhibit the same global patterns of distribution as other taxonomic groups. We found a significant negative relationship between latitude and PID species richness, and a nested spatial organization, i.e., the accumulation of PID species with latitude, over large spatial scales. Figures Copyright: © 2004 Guernier et al. Ecology Conferences Worldwide Conferences in ecology and related fields. Journey to the Sinking Lands.