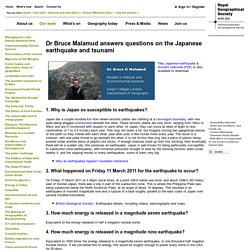 Why is Japan so susceptible to earthquakes? Japan lies a couple hundred km from where tectonic plates are colliding at a convergent boundary, with one plate being dragged (subducted) beneath the other. These tectonic plates are very thick, ranging from 10km to 50km and are in movement with respect to each other. At Japan, they can move at rates of eight to nine centimetres (3.1 to 3.5 inches) each year. This may not seem a lot, but imagine moving two gargantuan pieces of the earth so they collide with each other, year after year, a few inches more every year. Why do earthquakes happen?

2. On Friday 11 March 2011 at 2.46pm (local time), at a point 32km below sea level, and about 129km (80 miles) east of Sendai Japan, there was a slip in part of the subduction zone. British Geological Society - Earthquake details, including videos, seismographs and maps 3. Equivalent to the energy released in half a megaton nuclear bomb. Japan 2011 Earthquake 1 - Overview - BBC World News America 11.03.2011. Japans tsunami how it happened documentary 2011. Japan earthquake and tsunami: list of impacts of disaster. More than 163,000 people were in shelters around the country following evacuation, the National Police Agency said. 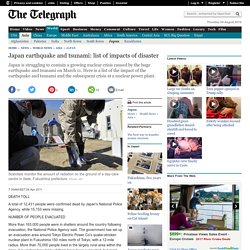 The government has set up an evacuation area around Tokyo Electric Power Co's quake-stricken nuclear plant in Fukushima 150 miles north of Tokyo, with a 12-mile radius. More than 70,000 people lived in the largely rural area within the zone. It is unclear how many of them have been evacuated, but most are believed to have left. Another 136,000 people were within a zone extending a further six miles in which residents are recommended to leave or stay indoors. JAPAN EARTHQUAKE AND TSUNAMI: Immediate Response and Recovery Projects. On March 11, 2011 a 9.0 earthquake struck Japan. 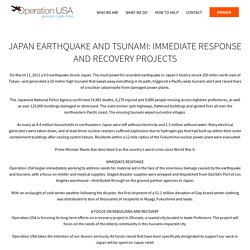 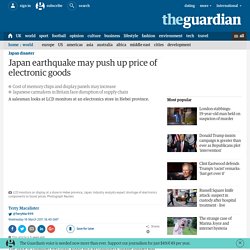 There are already signs of an increase in the price of memory chips and display panels for computers and game consoles due to problems at Japanese factories. "While there are few reports of actual damage at electronic production facilities, impacts on the transportation and power infrastructure will result in disruption of supply, resulting in rising prices. Components impacted will include NAND flash memory, DRAM, microcontrollers … and LCDs," said analysts in a report for market research firm IHS iSuppli. Japan tsunami and earthquake: video footage roundup. First pictures from Sendai Early television pictures showed a wall of water that swept away everything in its path in Sendai. 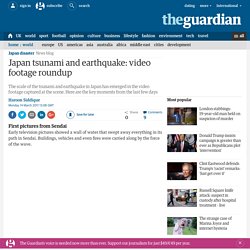 Is the tsunami too big to beat? It was chilling to see the aerial footage of the debris-laden tsunami sweeping across the flat, featureless landscape of eastern Honshu. 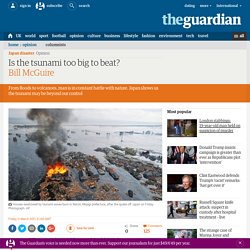 Its staggering power has done untold damage to lives and property. Natural hazards, which I study, take on a wide variety of forms, all of which have the potential to cause mayhem on a biblical scale. Generally, though, their impact affects a single city or region. But great underwater earthquakes are very different. Industry in Japan grinds to a halt after quake and tsunami. Industry in the world's third-largest economy all but ground to a halt following the earthquake, as manufacturers ranging from Toyota to Nissan, Sony, Fuji and brewers Kirin and Sapporo shut down their operations in Japan to assess damage and allow staff to check on their families. 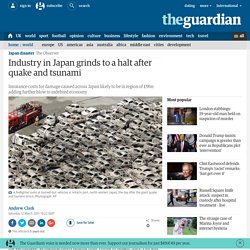 The quake is a shattering blow to Japan's already heavily indebted economy, which recently endured a downgrade in its credit rating. Finance minister Yoshihiko Noda raised the prospect of an emergency budget to cope with reconstruction costs, but suggested that this would be hard to compile before the end of March. Global prices for oil, grain and natural gas are likely to rise as a result of damage to Japan's nuclear power stations, ports and infrastructure. Japan's economy heads into freefall after earthquake and tsunami. The full extent of the economic impact of Friday's earthquake and tsunami is becoming apparent , with hundreds of factories shut across Japan, warnings of rolling blackouts and predictions from economists that the disaster would push the country into recession. 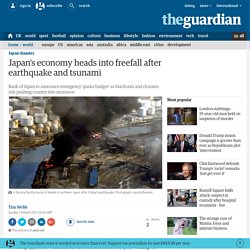 The Bank of Japan is preparing to pump billions of yen into the economy when it announces an emergency "quake budget" on Monday to prevent the disaster derailing the country's fragile economic recovery. Toyota and Nissan said they were halting production at all of their 20 factories. Toyota, the world's largest carmaker, evacuated workers from two plants in the worst affected regions and has not been able to reach the sites to inspect the damage.

The plants make up to 420,000 small cars each year, mostly for export. Japan struck by earthquake and tsunami - in pictures. Fukushima power plant operator 'knew of need to protect against tsunami' The operator of Japan’s ruined Fukushima Daiichi nuclear power plant was aware of the need to improve the facility’s defences against tsunami more than two years before the March 2011 disaster but failed to take action, according to an internal company document. 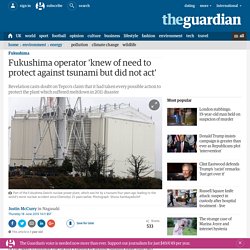 The revelation casts doubt on claims by Tokyo Electric Power (Tepco) that it had done everything possible to protect the plant, which suffered a triple meltdown after being struck by a towering tsunami. After the earthquake, a tsunami of death and destruction in Japan. It was 2.46pm when the chandeliers began swinging wildly in Tokyo's parliament chamber. 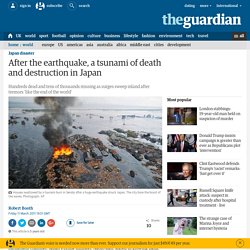 Japan's prime minister, Naoto Kan, stared in growing panic as the tremors intensified. Outside, buildings swayed like giant metronomes, roads cracked apart and people screamed and ran for shelter. The biggest earthquake in the country's history had struck. In the minutes that followed, a series of 10-metre high tsunami waves peeled 80 miles across a calm Pacific ocean from the quake's epicentre to Japan's north east coast. Their symmetry belied a raging power that left behind a boiling back wash. Japan earthquake and tsunami: as it happened March 11. 23:38 The Independent newspaper is quoting reports of tens of thousands of people missing. That's many times the official police estimates. 23:12 What appeared to be a relatively controllable problem at the Fukushima facility is starting to look more serious.

Mark Hibbs, of the Carnegie Endowment for International Peace, said if the cooling systems were not repaired within 24 hours, the plant risked a “definite danger of a core meltdown", with the “ultimate worst-case” was a “Chernobyl scenario” with explosions destroying the reactor. 22:42 Second power plant at Fukushima starting to lose its cooling systems, according to Japanese officials. 22:10 Fukushima plant is still partly submerged in the floodwater. 22:03 Radiation at Fukushima nuclear power station rising to 1,000 times normal levels, according to unconfirmed reports.

Satellite Photos Before and After of Japan's Earthquake, Tsunami - Universe Today. [/caption] Photos from the GeoEye satellite imaging company from before and after the March 11 earthquake and tsunami in Japan show sobering views from above of the disaster. Above is the town of Sendai, Japan after the quake, below is how it looked before catastrophe struck. Arahama, Japan before the disaster.

Satellite image courtesy of GeoEye. See more below. Japan's megaquake and killer tsunami: How did this happen? On March 11, 2011, at 2:46 p.m. local time, a magnitude-9.0 earthquake ruptured a 500-kilometer-long fault zone off the northeast coast of Japan. Its epicenter was 130 kilometers off Sendai, Honshu; it occurred at a relatively shallow depth of 32 kilometers. The temblor violently shook northeast Honshu for six minutes, and collapsed its coastline by one meter.

The thrusting moved Honshu about 2.4 meters eastward, and the seismic waves on the Pacific Ocean floor set off tsunami waves traveling at the speed of a jet plane (about 700 kilometers per hour). Waves 3 to 38 meters tall pounded Honshu’s coastline, destroying towns and villages and flooding areas up to 10 kilometers inland.

Japan earthquake: Tsunami leaves Sendai area devastated. As you enter the tsunami zone, there is nothing but devastation stretching away into the distance. Japan quake: Loss and recovery in numbers. Twelve months after north-eastern Japan was shaken by a 9.0 magnitude earthquake and inundated by tsunami waters, Lucy Rodgers looks at the scale of the disaster and how much progress the country has made towards recovery. The Great East Japan Earthquake and resulting tsunami that tore through the country's north-eastern coastal communities killed almost 16,000 people and destroyed the lives of thousands more.

The double disaster, which in turn triggered a third crisis at the Fukushima nuclear plant, may have been a year ago, but for many of those in the worst-affected areas life remains in a state of turmoil. In Miyagi, Iwate and Fukushima prefectures whole communities were wiped out by the ferocious power of the tsunami. On top of the current known death toll, a further 3,000 people are still listed as missing. Even among those that survived, many were unable to return home. Clean-up. Tohoku Tsunami Strikes Sendai Japan 2011 New Footage. Promotional Committee for the 2016 G7 Finance Ministers and Central Bank Governors' Meeting, Sendai. The Tohoku - Pacific Ocean Earthquake occurred at 14:46 p.m., March 11, 2011. TheSendaiEarthquakeanupdate.