35 Reasons To Visit Hokkaido At Least Once In Your Life - TheSmartLocal. Things You Must Do In Hokkaido You may know of friends who travelled to Hokkaido, the most Northern part of Japan. 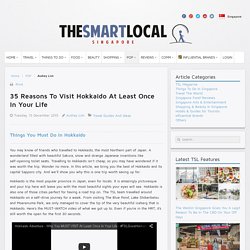 A wonderland filled with beautiful Sakura, snow and strange Japanese inventions like self-opening toilet seats. Travelling to Hokkaido isn’t cheap, so you may have wondered if it was worth the trip. Wonder no more. In this article, we bring you the best of Hokkaido and its capital Sapporo city. Osaka Budget Guide - Travel for under S$70 a day including accom. Japan is one of those places that everyone who’s visited raves about – the friendly and polite locals, the clean streets, a gastronomic heaven but… not so much the price. 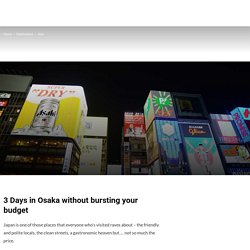 Just recently, we ventured out on our first overseas trip to Japan visiting Osaka, Kyoto and Nara. While we believe in being budget but not too shabby, we thought Japan would be a bit of a challenge. Taking a taste test for ourselves, we were pretty surprised to have delicious meals, feast on instaworthy sights, and stay at budget-friendly but comfortable accommodations for under S$70 a day! During our trip, our accommodation ranged from 20 bed hostel dorms to traditional guesthouses with tatami floors and even a capsule hotel with it’s own public bath and sauna access.

16 Must eat foods in Osaka and Kyoto - The Travel Intern. As a foodie, hunting down the best food in town has always been my top priority when travelling. 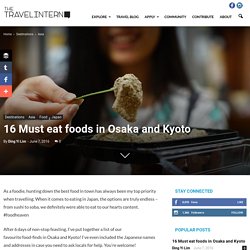 When it comes to eating in Japan, the options are truly endless – from sushi to soba, we definitely were able to eat to our hearts content. #foodheaven. Japan Rail Pass - Itinerary tip: Mt. Fuji. For many, seeing the snow-capped peak of Japan's no.1 volcano, Mt. 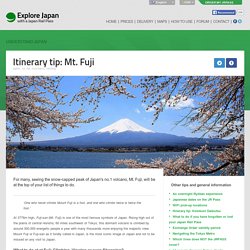 Fuji, will be at the top of your list of things to do. ‘One who never climbs Mount Fuji is a fool, and one who climbs twice is twice the fool.’ At 3776m high, Fuji-san (Mt. Fuji) is one of the most famous symbols of Japan. Rising high out of the plains of central Honshū, 60 miles southwest of Tokyo, this dormant volcano is climbed by around 300,000 energetic people a year with many thousands more enjoying the majestic view. Tateyama Kurobe Alpine Route (Tateyama Kurobe Alpen Route) Travel Guide. See our report from the snow wall on April 18, 2016 The Tateyama Kurobe Alpine Route (立山黒部アルペンルート, Tateyama Kurobe Alpen Route) is a unique and spectacular route through the Northern Japan Alps which is traversed by various means of transportation including cablecars, trolley buses and a ropeway. 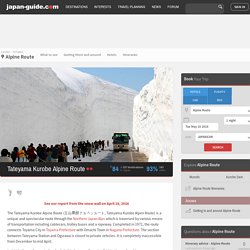 Completed in 1971, the route connects Toyama City in Toyama Prefecture with Omachi Town in Nagano Prefecture. The section between Tateyama Station and Ogizawa is closed to private vehicles. It is completely inaccessible from December to mid April. In 2016, the entire route is scheduled to be open from April 16 to November 30.

The main attraction of the Tateyama Kurobe Alpine Route is the magnificent scenery of the Tateyama Mountain Range, part of the Chubu Sangaku National Park. When to travel to Japan - Travel Weather. The tables list average daytime high and nighttime low temperatures and average percentages of sunny and rainy days for selected cities. 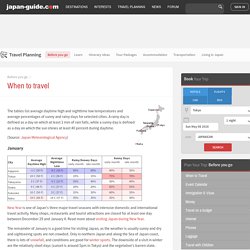 The remainder of January is a good time for visiting Japan, as the weather is usually sunny and dry and sightseeing spots are not crowded. February. Go Away, Sam...: Historic preserved streets/districts in Japan. I enjoy visiting old and historic streets when I visit Japan. 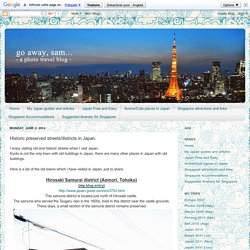 Kyoto is not the only town with old buildings in Japan, there are many other places in Japan with old buildings. Here is a list of the old towns which I have visited in Japan, just to share. This samurai district is located just north of Hirosaki castle. The samurai who served the Tsugaru clan in the 1600s, lived in this district near the castle grounds.

These days, a small section of the samurai district remains preserved. Shin-Aomori to Hirosaki via JR Ou Line (40mins, 580yen) From Hirosaki station, take the Loop bus. When to travel to Japan - Travel Weather. 10 Stunning Reasons Why Shizuoka Is The Most Overlooked Gem Near Tokyo - TheSmartLocal. 30 reasons to go to Japan before you die - tsunagu Japan. How To Enjoy A 10-Day Trip To Japan For Less Than S$1700. I shopped till I dropped, and I ate till I popped. 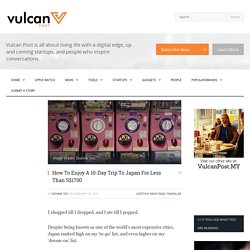 Despite being known as one of the world’s most expensive cities, Japan ranked high on my ‘to-go’ list, and even higher on my ‘dream-on’ list. A Singaporean has got to think twice about where he/she puts his/her money right? Cars are expensive, housing prices are rising…even balloting for a HDB flat requires money! So a vacation to a place that ranks even pricier than Singapore would probably have me eating dirt every day for the next 2 years after the trip. But thanks to my lucky stars and a shrewd travel partner, I managed to knock this ‘to-do’ off my bucket list for less than S$1700 (~ ¥153,000) and with a few extra yen to spare. So here are some tips if you’re planning a trip to the Land of the rising Sun, or anywhere in particular, actually! DISCLAIMER: This is NOT a sponsored post. 1. We all know how Scoot Airlines has this thing for good and consistent discounts – there’s a massive sale for every occasion. 2. 3. 4. 5. 6. ABC Mart.