Fired up about Gifu's pottery industry. Toki, a small town in Gifu Prefecture, 37 km from Nagoya, sits above a huge clay basin. 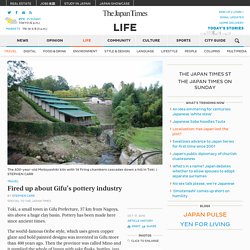 Pottery has been made here since ancient times. The world-famous Oribe style, which uses green copper glaze and bold painted designs was invented in Gifu more than 400 years ago. Then the province was called Mino and it supplied the whole of Japan with sake flasks, bottles, jars, dishes, bowls, cups, plates, teapots, vases, incense burners, inkstones, water droppers, tea ceremony implements and smoking paraphernalia. Mino pottery, known as Minoyaki has four main types: Oribe; Shino, which has a milky white to orange glaze, sometimes with charcoal grey spotting; the yellow Ki-seto and the black Kuro-seto. On the outskirts of Toki is Oribe Village Park where a 400-year-old kiln has been spectacularly preserved and another reconstructed.

This place is set in park-like grounds with flower gardens and there are various other attractions such as pottery workshops where visitors can make their own ceramics. What Makes a Teabowl a Chawan – now online! Posted by Cindy Bracker, Communications Director When it comes to the formal practice of Chanoyu (Tea Ceremony) there is more to the making of a good Chawan than initially meets the eye. 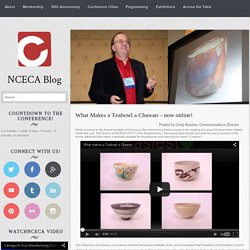 This lecture at NCECA 2015 “Lively Experiments,” discussed basic temae (procedure) and a number of the formal attributes that make a teabowl suitable for the tearoom and earning the name “Chawan”. John Baymore is professor of ceramics at New Hampshire Institute of Art, and Immediate Past President of the Potters Council of ACerS. He has been a presenter at venues such as Tokyo University of the Arts, the Yixing Pottery Festival, the International Academy of Ceramics, and NCECA conferences in 1984, 1999, 2006, and 2012. Like this: Like Loading... Related Join the Social Media Team! NCECA is looking for media-savvy volunteers to populate our social media team.

April 28, 2015 In "online programming" Call for entries for the 2015 Biennial: "Lively Experiments" Contemporary Japanese Ceramics from the Collection of Gordon Brodfuehrer. Nature, Tradition and Innovation. Brand Story - Takaokaya: Kyoto-style Cushions and Bedding. Takaokaya is a producer of hand-made Japanese zabuton cushions and futon in the ancient capital of Kyoto. 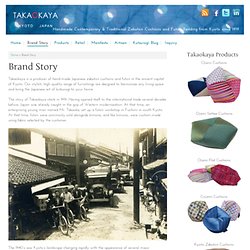 Our stylish, high quality range of furnishings are designed to harmonize any living space and bring the Japanese art of kutsurogi to your home. The story of Takaokaya starts in 1919. Having opened itself to the international trade several decades before, Japan was already caught in the grip of Western modernization. At that time, an enterprising young man named Mr. Takaoka, set up a futon workshop in Fushimi in south Kyoto. The 1940’s saw Kyoto’s landscape changing rapidly with the appearance of several major department stores, such as Daimaru and Mitsukoshi, which are still around today. Successive generations of the Takaokas have continued to nurture Kyoto craftsmanship that has been cultivated for over 1000 years, creating products that are true to the times and yet draw on the traditions unique to this ancient city.

Mr. Japanese Pottery - Apprciating It, Listing of Galleries. TOKYO LISTINGS -- GALLERIESMore than a humble piece of clay By ROBERT YELLIN for The Japan Times, Aug. 14, 1999 Japan is a ceramic paradise, plain and simple. 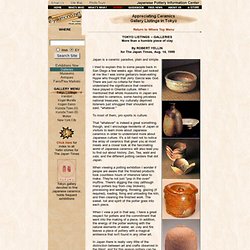 I tried to explain this to some people back in San Diego a few weeks ago. Most just looked at me like I was some garbanzo bean-eating hippie who thought that Jerry Garcia was God. There are just no criteria for them to understand the significance that ceramics have played in Oriental culture. To most of them, pro sports is culture. はじめに. Gabor Terebess: Japanese Raku and its American Renaissance. Moss and Stone Gardens. This page pulls together many posts from this blog as a convenient way to cover the basics of moss gardening. 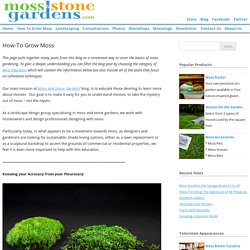 To gain a deeper understanding you can filter the blog post by choosing the category of Moss Education which will contain the information below but also include all of the posts that focus on cultivation techniques. Our main mission at Moss and Stone Gardens‘ blog, is to educate those desiring to learn more about mosses. Our goal is to make it easy for you to understand mosses; to take the mystery out of moss – not the mystic. As a landscape design group specializing in moss and stone gardens, we work with homeowners and design professionals designing with moss. Knowing your Acrocarp from your Pleurocarp INTRODUCTIONAll mosses can be classified as 2 types: Acrocarpous and Pleurocarpous Recently, I asked David Spain, our moss expert, to describe the two types of mosses we are so often writing about.

Acrocarpous mosses have an upright growth habit. Real Japanese Gardens. Do you want to experience Zen Buddhist philosophy first hand and meet a zen priest that makes you laugh? 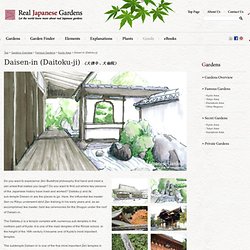 Do you want to find out where key persons of the Japanese history have lived and worked? Daitoku-ji and its sub-temple Daisen-in are the places to go. Here, the influential tea master Sen no Rikyu underwent strict Zen training in his early years and, as an accomplished tea master, held tea ceremonies for the Shogun under the roof of Daisen-in. The Daitoku-ji is a temple complex with numerous sub-temples in the northern part of Kyoto. Welcome to JapanesePottery.com Ceramics eStore - Robert Yellin Yakimono Gallery. Nature, Tradition and Innovation.