Japan evacuates 100,000 in floods sparked by rare torrential rains. Troops deployed amid heavy rains, floods in Japan. Ibaraki and Tochigi prefectures were placed on high alert due to record-breaking rainfall, the Japan Meteorological Agency said Thursday, while officials said at least 170,000 people have been forced to flee their homes. 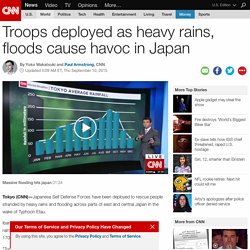 "Tochigi Prefecture is facing a grave danger and is in an emergency situation. It is experiencing unprecedented downpour," Japan Meteorological Agency Spokesman Takuya Deshimaru told reporters. Japan floods spark evacuations of thousands from towns. Tens of thousands of people were ordered to flee homes across Japan on Thursday as heavy rain pounded the country, sending radiation-tainted waters into the ocean at the crippled Fukushima nuclear plant. 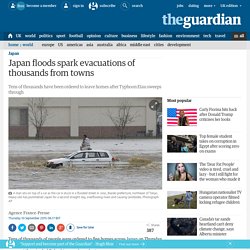 Waist-high floods in some areas left rescuers scrambling to pluck people to safety as a wide area was deluged in the wake of Typhoon Etau. “This is a scale of downpour that we have not experienced before. Grave danger could be imminent,” forecaster Takuya Deshimaru told an emergency press conference. The Japan Meteorological Agency issued special warnings for Tochigi and Ibaraki prefectures, north of Tokyo, urging vigilance against mudslides and flooding.

More than a dozen people were injured, including a 77-year-old woman who broke her leg after falling in strong winds, local reports said. Etau, which smashed into Japan on Wednesday, moved out into the Sea of Japan (East Sea) by the end of the day, but a wall of rain continued to lash the country. Emergency Flood and Landslide Warnings in Japan; Levee Breach Destroys Homes, Forces Dramatic Rescues - weather.com. Residents Rescued from Japan Storm Tropical storm Etau continues to wreak havoc on Japan as seen in this video when officials rescue stranded residents from their flooded residents. 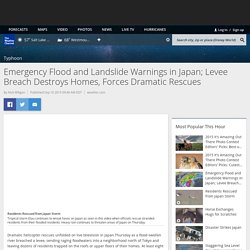 Heavy rain continues to threaten areas of Japan on Thursday. Dramatic helicopter rescues unfolded on live television in Japan Thursday as a flood-swollen river breached a levee, sending raging floodwaters into a neighborhood north of Tokyo and leaving dozens of residents trapped on the roofs or upper floors of their homes. At least eight people are missing due to flooding and landslides caused by extreme rainfall resulting from former Tropical Storm Etau, according to local government officials. 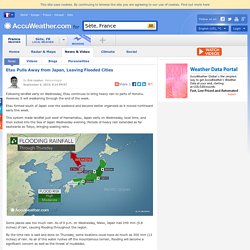 However, it will weakening through the end of the week. Etau formed south of Japan over the weekend and become better organized as it moved northward early this week. This system made landfall just west of Hamamatsu, Japan early on Wednesday, local time, and then exited into the Sea of Japan Wednesday evening. Some places saw too much rain. By the time rain is said and done on Thursday, some locations could have as much as 300 mm (12 inches) of rain. Asia: Showers in Bangkok and Mumbai As Etau slowly moves northward away from Japan, the system will continue to weaken. Rainfall during the second half of the week is expected to lessen across much of Japan, though additional rainfall could still lead to isolated flooding problems in northern Honshu on Friday.

RELATED:Detailed Tokyo ForecastJapan Weather CenterWestern Pacific Typhoon Center. Breaking news on Japan. Typhoon Hits Japan, Man Photobombs the Evening News. Prayers for Those Affected by Storms. I thought these prayers, sent out from the ELCA, might be helpful to those who want to voice their concerns to God regarding our neighbors being affected by Hurricane Sandy: Prayer for those in the midst of the storm: Merciful God, when the storms rage and threaten to overtake us, awaken our faith to know the power of your peace. 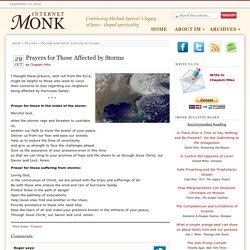 Deliver us from our fear and ease our anxiety. Help us to endure the time of uncertainty and give us strength to face the challenges ahead. Prayer for those suffering from storms: Loving God, in the communion of Christ, we are joined with the trials and sufferings of all. Go.