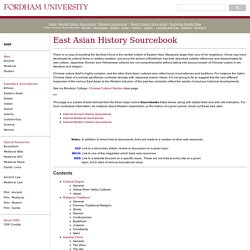 Massively larger than any of her neighbors, China may have developed its cultural forms in relative isolation, but since the advent of Buddhism has both absorbed outside influences and disseminated its own culture. Japanese, Korean and Vietnamese cultures are not comprehensible without taking into account power of Chinese culture in art, literature and religion. Chinese culture itself is highly complex, and the other East Asian cultures also reflect local circumstances and traditions. For instance the (later) Chinese ideal of a scholar-gentleman contrasts strongly with Japanese warrior ideals. See my Brooklyn College: Chinese Cultural Studies class page. This page is a subset of texts derived from the three major online Sourcebooks listed below, along with added texts and web site indicators. Contents Cultural Origins General Yellow River Valley Cultures. Culture of the Samurai - Google Arts & Culture. Shogun - Center for Japanese Studies - Japanese Language, Culture and Traditions.

The traditional Japan is as far away of our imagination as is the distance that separates us from the Country of the Rising Sun. 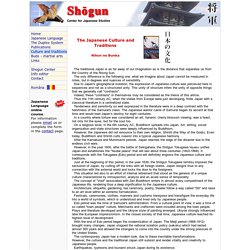 The only difference is the following one: what we imagine about Japan cannot be measured in miles, but in degrees and nuances of sensibility. Due to Japan's geographical isolation, the expression of Japanese culture was perceived here in sequences and not as a structured unity. This unity of structure infers the unity of opposite things that we generally call "contrasts". Indeed, these "contrasts" in themselves may be considered as the thesis of this article.

Thus the 11th century AC, when the states from Europe were just developing, finds Japan with a classical literature in a centralized state. Japanese history. The Samurai Archives Japanese History Page. Feudal Japanese Timeline. The feudal Japan timeline starts in 1185, which was the year that ended the Heian period. 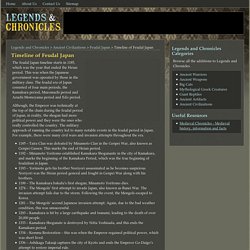 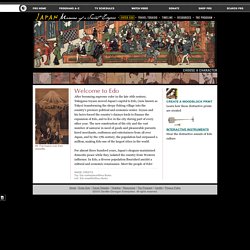 Ieyasu and his heirs forced the country's daimyo lords to finance the expansion of Edo, and to live in the city during part of every other year. The new construction of the city and the vast number of samurai in need of goods and pleasurable pursuits lured merchants, craftsmen and entertainers from all over Japan, and by the 17th century, the population had surpassed a million, making Edo one of the largest cities in the world. For almost three hundred years, Japan's shoguns maintained domestic peace while they isolated the country from Western influence. In Edo, a diverse population flourished amidst a cultural and economic renaissance. Meet the people of Edo! IMAGE CREDITS Top: Edo marketplace/Mitsui Bunko.Left: Edo streetlife/Mitsui Bunko. Shogun : Japan's Greatest Samurai Warrior (Full Documentary)

BBC Warriors 2of6 Shogun 720p HDTV x264 AAC MVGroup org. Samurai, Daimyo, Matthew Perry, and Nationalism: Crash Course World History #34. Feudal Japan. Japan Under the Shoguns - Home. Timeline - Japan Under the Shoguns. Museum of the World. Isolated Japan Maps the Forbidden Outside World. For two centuries after 1640, the official Japanese policy towards the outside world was known as sakoku (‘closed country’), by which both Japanese leaving the country and foreigners entering it could expect the death penalty. 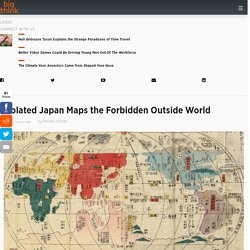 Although in practice not quite as harshly absolute as that, isolationism prevailed until American commodore Matthew Perry’s Black Fleet sailed into Uraga harbour in 1853, forcing Japan to open up, first to commerce with the U.S., later to trade with other western countries. This Japanese world map circa 1850, gives an impression of the country’s view of its place in the world on the verge of its forced reintegration into the international community.

It is an intriguing mix of foreign knowledge and native perspective. The Japanese archipelago is placed self-confidently at the centre of the map, banishing Europe from its usual central place to a marginal one, at the western edge. The American continent is shoved to the map’s far eastern side. Strange Maps #400.