The COVE - Taiji - Where the Dolphins are slaughtered, in Japan

Paul Watson: Join World Love for Dolphins Day to Put an End to the Slaughter. Most people throughout the world love and respect dolphins. 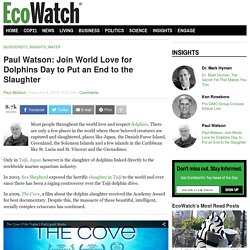 There are only a few places in the world where these beloved creatures are captured and slaughtered, places like Japan, the Danish Faroe Island, Greenland, the Solomon Islands and a few islands in the Caribbean like St. Lucia and St. Vincent and the Grenadines. The Cove Movie Extended Clip - Captivity. Japon : l'enfer des cétacés ! Misty, la petite oubliée de la Dolphin Base à Taiji. 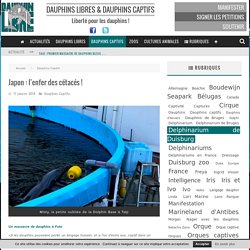 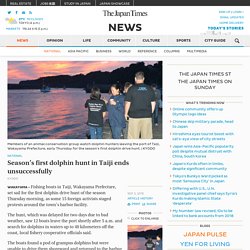 The hunt, which was delayed for two days due to bad weather, saw 12 boats leave the port shortly after 5 a.m. and search for dolphins in waters up to 40 kilometers off the coast, local fishery cooperative officials said. The boats found a pod of grampus dolphins but were unable to drive them shoreward and returned to the harbor by around 10:30 a.m., they said.

Among the protesters was American pro-dolphin activist Ric O’Barry, who featured in the Oscar-winning 2009 documentary film “The Cove” about the town’s controversial dolphin hunt. He was arrested Monday in a nearby town for failing to carry his passport, but later released. In the previous season, they caught 937 dolphins against a quota of 1,971. Dolphin roundup at Japan’s Taiji Cove puts spotlight on changing economics of hunts. By Tim Zimmermann. 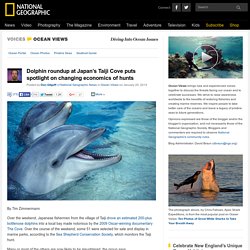 Save Japan Dolphins. Many of you are sad, mad and ready to do something about it. 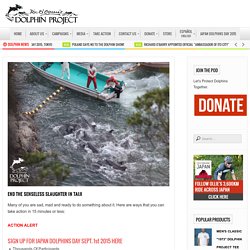 Here are ways that you can take action in 15 minutes or less: SIGN UP FOR JAPAN DOLPHINS DAY SEPT. 1st 2015 HERE Thousands Of ParticipantsWorldwide EventsOver 30 Countries & GrowingIf you don’t see an event near you, we’ve made it easy to create your own. The dolphin (and whale) trade is an incredibly lucrative global industry that preys on human interest in these incredible animals. Sea World, aquariums, and spring break swim-with-dolphin trips, no matter how fun, support an industry that profits from animal cruelty.

Click here to see a list of captive dolphin facilities that have been closed down, or never opened, thanks to the efforts of people like you. Captive Cetaceans Tragically Sad: All these Parks Buy from the Taiji Drive Hunt. Parks That Buy Their Dolphins From The Taiji Drive Hunt You can help take away the market for dolphins and pilot whales caught at the Taiji Drive Hunts by not attending any of these parks. 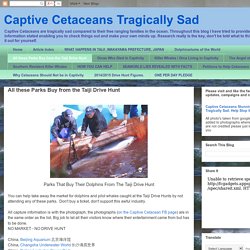 Don't buy a ticket, don't support this awful industry. All capture information is with the photograph, the photographs (on the Captive Cetacean FB page) are in the same order as the list. Big job to let all their visitors know where their entertainment came from but has to be done. NO MARKET - NO DRIVE HUNT. Half the dolphins caught in Japan hunt exported despite global outcry: report. About half of the live dolphins caught in the Japanese coastal town of Taiji were exported to China and other countries despite global criticism of the hunting technique used, a news report has said. 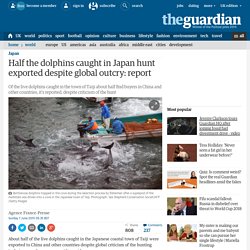 The so-called “drive hunt” method has been criticised overseas as cruel and Japanese zoos and aquariums were recently forced to vow not to buy animals caught with the controversial fishing. A total of 760 live dolphins were sold between September 2009 and August 2014 in Japan, Kyodo News said Saturday, quoting data from Japan’s Fisheries Research Agency and other statistics. They show that 354 were exported to 12 countries, including 216 to China, 36 to Ukraine, 35 to South Korea and 15 to Russia. 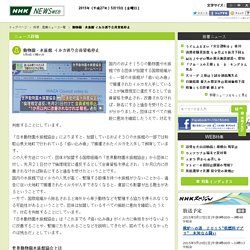 Oceanic Preservation Society. Captive Cetaceans Tragically Sad: Evidence shows Sustainability Study IS Needed for the Taiji and Iwate Hunt Quotas. Yamamoto San, kindly shared these links, although not for the reasons they are being used here. 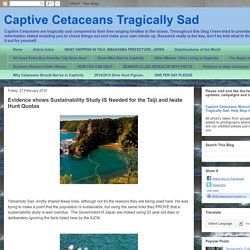 He was trying to make a point that the population is sustainable, but using the same links they PROVE that a sustainability study is well overdue. The Government of Japan​ are indeed using 20 year old data or deliberately ignoring the facts listed here by the IUCN Risso's IUCN link 83,300 (CV=17%) in three areas of concentrated occurrence off Japan (Miyashita 1993) This shows the quotas are being set from a 21 year old set of figures. Conservation Actions: The species is listed in Appendix II of CITES. The North and Baltic Sea subpopulations are included in Appendix II of CMS. This is a circumglobal species, which migrates between summering and wintering grounds. What Happens To Dolphins In Taiji? Honoring The Victims of Slaughter and Captivity [GRAPHIC] Risso’s Slaughter and Albino Capture. “An extremely rare albino dolphin was brutally captured in Taiji, Japan. 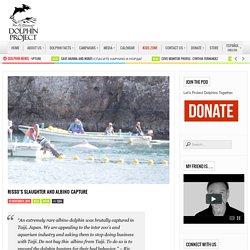 We are appealing to the inter zoo’s and aquarium industry and asking them to stop doing business with Taiji. Do not buy this albino from Taiji. To do so is to reward the dolphin hunters for their bad behavior.” – Ric O’Barry Taiji, Japan November 23, 2014 The day started like all the others here in Taiji. At 10:00 a.m., I saw a few boats heading towards the harbor. Save Japan’s Dolphins. Many of you are sad, mad and ready to do something about it.

Here are ways that you can take action in 15 minutes or less: The dolphin (and whale) trade is an incredibly lucrative global industry that preys on human interest in these incredible animals. Sea World, aquariums, and spring break swim-with-dolphin trips, no matter how fun, support an industry that profits from animal cruelty. When they’re not doing flips for you, most dolphins are treated poorly. In spite of their naturally “smiling” faces, it’s pretty much impossible to keep dolphins happy and healthy in any captive setting. Click here to see a list of captive dolphin facilities that have been closed down, or never opened, thanks to the efforts of people like you. Risso dolphin slaughter and capture. Dominic Dyer speech at the Taiji protest at the Japan Embassy in London 7Nov14. Will Futo Stay Dolphin Friendly? Ric O’Barry, Dolphin Project Founder & Director has worked on both sides of the captive dolphin issue, making him an invaluable asset in the efforts to end exploitation.

The Cove: Sign the Petition to Help Save Japan's Dolphins. In The Cove, a team of activists and filmmakers infiltrate a heavily-guarded cove in Taiji, Japan. In this remote village they witness and document activities deliberately being hidden from the public: More than 20,000 dolphins and porpoises are being slaughtered each year and their meat, containing toxic levels of mercury, is being sold as food in Japan, often times labeled as whale meat. The majority of the world is not aware this is happening. The Taiji cove is blocked off from the public. Cameras are not allowed inside and the media does not cover the story. End The Senseless Slaughter In Taiji. To both the Japanese and US dignitaries who stated the opinions about the dolphin hunting, these are the demands from us. In January, 2014, the official statements about the dolphin hunting in Taiji, Japan, were announced by Mr. Shinzo Abe, Prime Minister of Japan, Ms.

#Tweet4Taiji. What Happens To Dolphins In Taiji? Honoring The Victims of Slaughter and Captivity [GRAPHIC] Ask UK Government to Take Action Against Taiji Drive Hunts. Laurence wouters, France Dec 21, 02:23 Tracey Alison, United Kingdom Dec 21, 02:21 Mirella Leite, United Kingdom. Show the world the immense suffering of animals, Taiji, Faroe islands, Canada, China, Peru, Iceland...the list goes on..Show people the truth! Request the Japanese Government to take action and cease the barbaric slaughter of Dolphins & Whales at Taiji. In the small coastal town of Taiji, hundreds to thousands of dolphins and small whales are captured and killed each year during the annual dolphin drive hunt. For a staggering six months of every year - September 1st until March - a group of dolphin hunters herd wild dolphins from the ocean’s open waters into a hidden shallow bay, now infamously known around the world as the cove.

Pull the 2020 Olympics from Tokyo as long as Cetaceans are getting killed. Request the Japanese Government to take action and cease the barbaric slaughter of Dolphins & Whales at Taiji. Sign The Musicians Pledge For Dolphins & Whales - Musicians' Dolphin Alliance. Musicians & Bands – Speak out for Dolphins and Whales! Don’t sing for their tormentors! Warning: This film contains scenes that some viewers may find upsetting.