FUJI-Q HIGHLAND. JapanVisitor Japan Travel Guide. Tokyo Area Guide: Things to Do In Tokyo 東京 Tokyo is the point of entry for most visitors and business travelers to Japan and one of the world's most fascinating cities. 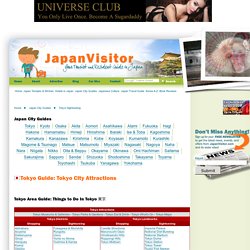 Tokyo city dates from around 1600 when the Shogun Tokugawa Ieyasu, chose Edo, then a small fishing village near the mouth of the Sumida River, as the shogunate's new capital. Edo grew to become the world's biggest city by the 1600's, with over a million people. Edo became Tokyo - Japan's capital - from 1868 after the Meiji Restoration and the move of the nation's capital from Kyoto. Tokyo is now an extraordinarily vibrant, exciting and fashionable modern metropolis, which still manages to reveal glimpses of its traditional past. Divided into a series of smaller 'cities' efficiently connected by public transport, Tokyo is the center for Japanese architecture, art, business, fashion, food, music, politics - and virtually everything else.

Tokyo: Areas of Interest. Osaka Amazing Pass (for Osaka area) OSAKA INFO -Osaka Visitors' Guide. PASMO - One of Japan's most popular smart cards. Japan Train Timetables and Route Finders. Japan has an extensive and efficient train network; however, without an intimate knowledge of the system, its complexity can make it difficult to figure out an efficient route. 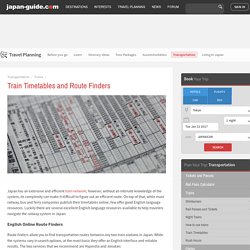 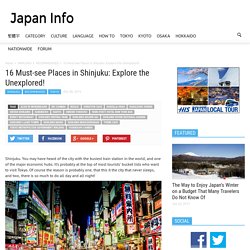 You may have heard of the city with the busiest train station in the world, and one of the major economic hubs. It’s probably at the top of most tourists’ bucket lists who want to visit Tokyo. Of course the reason is probably one, that this it the city that never sleeps, and two, there is so much to do all day and all night! Hopefully this article can be a guide for those who want to see more than the usual tourist spots and get deeper into the lesser known parts of Shinjuku! 1. This is quite the Memory Lane (literal translation of Omoide Yokocho) as you can get a nostalgic feel of 1950s olden Shinjuku, as you chomp on your tasty yakitori skewer while sitting in a slightly cramped barspace, surrounded by Japanese salarymen who come to drink beer after a hard day’s work. Economical Tickets. IC cards These IC transport cards, which are interchangeable all across the country, can be used for traveling on major railways and busses in the metropolitan area. 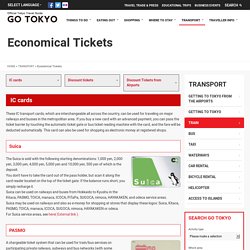 If you buy a new card with an advanced payment, you can pass the ticket barrier by touching the automatic ticket gate or bus ticket reading machine with the card, and the fare will be deducted automatically. This card can also be used for shopping as electronic money at registered shops. Suica. Tsukiji Fish Market - 10 Things You Need to Know Before Visiting. The Tsukiji Fish Market appears in literally every guide book about Tokyo and on most people’s tour itineraries—plus it boasts free entrance! 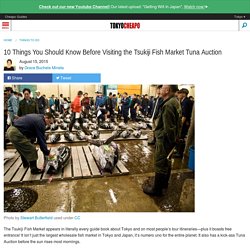 It isn’t just the largest wholesale fish market in Tokyo and Japan, it’s numero uno for the entire planet. It also has a kick-ass Tuna Auction before the sun rises most mornings. Note:The Tsukiji Market relocation has been postponed! Until recently, the Tsukiji Fish Market was destined to relocate (despite considerable opposition) to a larger and slightly more inconvenient location in Toyosu—a move originally set for November 7, 2016. However, it was recently announced that the move to the new site has been delayed indefinitely. 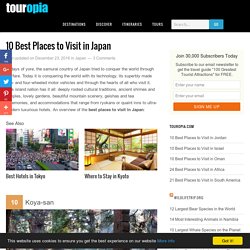 Today it is conquering the world with its technology, its superbly made two- and four-wheeled motor vehicles and through the hearts of all who visit it. This island nation has it all: deeply rooted cultural traditions, ancient shrines and temples, lovely gardens, beautiful mountain scenery, geishas and tea ceremonies, and accommodations that range from ryokans or quaint inns to ultra-modern luxurious hotels. 1-Day Tokyo DisneySea Itinerary. If you’re visiting Tokyo Disney Resort, it may be part of a greater Japan trip, and you may only have one day for Tokyo DisneySea. 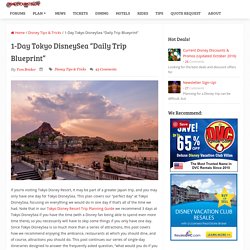 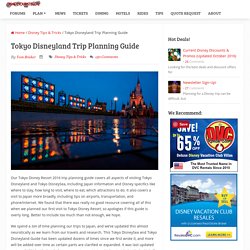 It also covers a visit to Japan more broadly, including tips on airports, transportation, and phone/internet. We found that there was really no good resource covering all of this when we planned our first visit to Tokyo Disney Resort, so apologies if this guide is overly long. Better to include too much than not enough, we hope. 6 Things You Should Know Before Going To Tokyo Disneyland or DisneySea.

Japan is really lucky to have not one, but two Disney theme parks. 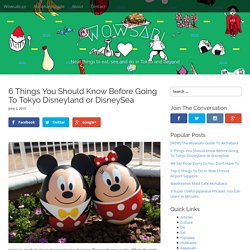 While the kids enjoy Disneyland with attractions like Pooh’s Hunny Hunt and Splash Mountain, the grownups have their own fun escape in DisneySea, where the most popular attraction is beer. The night electrical parade must be amazing when viewed after a few pints, I imagine. Every day, thousands of people pack the parks – families, couples, groups of friends, students on school trips and of course, tourists. The parks are enormous, and one day is not nearly enough to explore everything, especially with the long standby times at all the popular attractions that often reach upwards of three hours. Most people usually take one of two approaches to the theme parks. What to pack for a trip to Japan – Little Grey Box.

Greasers outside Yoyogi Park on a Sunday Tokyo is unlike any other place I’ve ever visited, it’s like stepping onto the set of an incredible movie. 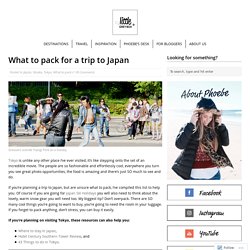 The people are so fashionable and effortlessly cool, everywhere you turn you see great photo opportunities, the food is amazing and there’s just SO much to see and do. If you’re planning a trip to Japan, but are unsure what to pack, I’ve compiled this list to help you. Of course if you are going for Japan Ski Holidays you will also need to think about the lovely, warm snow gear you will need too. My biggest tip? What to pack for a trip to Japan – Little Grey Box. How to Pack for a Trip to Japan. In our Japan Travel Tips series, we share quick and useful information to help you get the most out of your trip to Japan. One of the most common questions we get from travelers is about how to pack for a trip to Japan. So we’ve put together a list of our Top 7 Tips on Packing for a Trip to Japan. Geta at a traditional ryokan For even more on packing, check out our travel essentials checklist, including recommended books, gadgets, travel bags and more.

Tokyo Dome City Attractions. Problem loading page. Park Information. FUJI-Q HIGHLAND. 30 unexpected things you can only see in Japan. A kairo is a chemical warmer that you can carry around and throw it away once you’re done using it. Before, you used to have to unseal it and then shake it so the chemical reaction would begin, but newer versions just require opening it. There aren’t just versions for your hands, but there are also types to stick to the insides of your clothes. Thanks to its convenience and usefulness, it’s definitely something that is indispensable for the winter. 17. Yurukyara. 50 Japanese Foods to Try While You are in Japan. This post is also available in: Chinese (Traditional), Chinese (Simplified) 1.

Sushi Sushi is a dish combining vinegar rice and seafood (although sometimes other ingredients are also used). There is a type of fermented sushi, known as nare-zushi, but the most typical types of sushi are nigirizushi and temakizushi. Tokyo aquarium. Japan Round Up. 72 Random Observations About Japan. Japan is a wonderfully strange country. It’s the cultural differences that make travel interesting and Japan is full of them. These are some random observations that we jotted down in our moleskine as we travelled around the country. General 1) Japan has recovered extraordinarily well from the earthquake. We didn’t see any signs of it, although we didn’t travel further north than Tokyo. Japan Round Up. 72 Random Observations About Japan. How Much Does It Cost To Travel In Japan? The cost of travel in Japan puts many people off visiting. We wouldn’t have travelled there ourselves if we hadn’t had the opportunity to spend three and a half weeks housesitting in Kyoto.

Yes, it is expensive, at times shockingly so, but it probably doesn’t cost much more than many places in Western Europe and it was utterly worth it. There aren’t many places in the world that have such a unique and fascinating culture, yet it’s a developed country where everything just works. The people are wonderfully polite, the trains are comfortable and always on time, accommodation is of a high standard and the food is delicious. So how much did five and a half weeks in Japan cost us? Ways to Get Away From It All - Part 2: Onsen All The Way In Japan. This is the second guest post from Amy Cham, a friend of ours who has also left the UK forever. Planning a Trip to Japan: DOs & DON'Ts. Foreign visitors pick the 20 coolest places in Japan. The users of travel website Trip Advisor recently ranked Japan’s best free sightseeing spots.

Top 5 Must See Places in Japan for 2015. Japan has always been a popular holiday destination for foreign tourists, but last year saw a record number of tourists visit its shores. This can probably be attributed to a weaker yen and easing of visa requirements for travellers from some Asian countries, but I also think the quality of the attractions and sights on offer draws the tourists in as well. The Japanese government has also made a concerted effort to increase the amount of visitors to Japan via various promotional campaigns. 48 hours in Hiroshima. 10 Top-Rated Tourist Attractions in Hiroshima.

On the Inland Sea in western Honshu, Hiroshima will forever have its name associated with the dropping of the first atomic bomb on August 6th, 1945. Yet despite this devastating event - a tragedy that destroyed much of the city, killing an estimated 260,000 people and injuring more than 160,000 others - Hiroshima and its resilient people bounced back, and this remarkable city that so many believed would be uninhabitable for decades had, by 1974, doubled its pre-war population. Top 8 things to do in Hiroshima. Tokyo Museum Guide. 15 Must Visit Tokyo Attractions & Travel Guide - TommyOoi.com. 1. 50 Things to Do in Tokyo. Map 1. Tokyo Station - Ramen Street/Character Street [Food & Drink] [Shopping]

Japan dos and don'ts: etiquette tips for first-time travellers. The Japanese are a warm and welcoming people whose unique culture can be both frustrating and enlightening in its complexity and contradictions. It can take many years to get a good grasp of the Japanese language and psyche. Kyoto Travel Guide. How to Turn High Cost Japan into a Cheap Place to Visit. Grand Tournament Schedule - Nihon Sumo Kyokai Official Grand Sumo Home Page. Things not to miss in Japan. The Top 10 Places in Japan. 8 Places You Must Visit in Japan. How Expensive is Japan? Gallery: The 15 Best Things I Ate in Japan: Serious Eats.