The Real Reason America Used Nuclear Weapons Against Japan. It Was Not To End the War Or Save Lives. 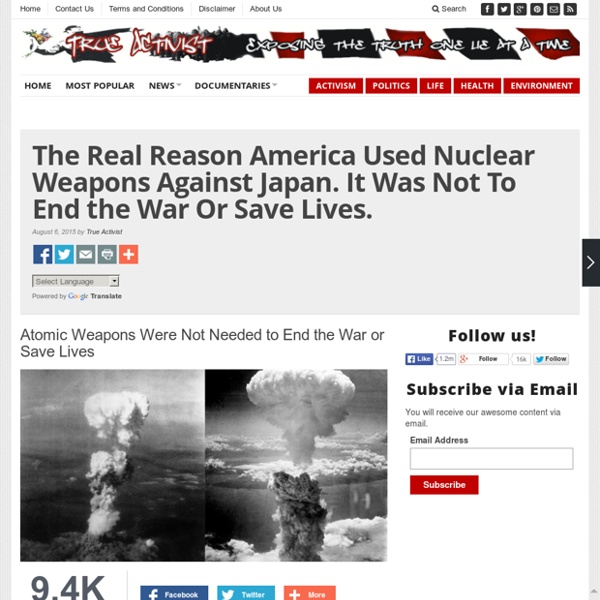 Like all Americans, I was taught that the U.S. dropped nuclear bombs on Hiroshima and Nagasaki in order to end WWII and save both American and Japanese lives. But most of the top American military officials at the time said otherwise. The U.S. Strategic Bombing Survey group, assigned by President Truman to study the air attacks on Japan, produced a report in July of 1946 that concluded (52-56): Based on a detailed investigation of all the facts and supported by the testimony of the surviving Japanese leaders involved, it is the Survey’s opinion that certainly prior to 31 December 1945 and in all probability prior to 1 November 1945, Japan would have surrendered even if the atomic bombs had not been dropped, even if Russia had not entered the war, and even if no invasion had been planned or contemplated. General (and later president) Dwight Eisenhower – then Supreme Commander of all Allied Forces, and the officer who created most of America’s WWII military plans for Europe and Japan – said:

AP FACT CHECK: Trump takes credit where it's not deserved - - March 07, 2017 WASHINGTON (AP) — The start of a new administration is never a clean slate, even when parties flip. Day One is just another day for military operations, a budget that is still in place from the old crowd and a vast array of economic, social and law enforcement initiatives left over from the last president. You would not know this from President Donald Trump.

East India Company - Once world’s most powerful corporation 2 clicks It was the most powerful multinational corporation the world had ever seen. Founded in 1600, the English East India Company’s power stretched across the globe from Cape Horn to China. The company was established for trading, with a royal charter by Queen Elizabeth I granting it a monopoly over business with Asia. When Dissent Became Treason America and the Great War: A Library of Congress Illustrated History by Margaret E. Wagner, with an introduction by David M. Kennedy Surrender of Japan On August 6, 1945, at 8:15 AM local time, the United States detonated an atomic bomb over the Japanese city of Hiroshima. Sixteen hours later, American President Harry S. Truman called again for Japan's surrender, warning them to "expect a rain of ruin from the air, the like of which has never been seen on this earth." Late in the evening of August 8, 1945, in accordance with the Yalta agreements, but in violation of the Soviet–Japanese Neutrality Pact, the Soviet Union declared war on Japan, and soon after midnight on August 9, 1945, the Soviet Union invaded the Imperial Japanese puppet state of Manchukuo.

NASA Astronaut: Space Lessons of Scott Kelly's Year in Orbit By Scott Kelly A year ago, astronaut Scott Kelly returned to Earth after the longest time spent in orbit by an American. On his trip, with Russian cosmonaut Misha Kornienko, he executed experiments designed to examine mysteries of the human body and mind. His discoveries often reached beyond science. In a preview of his forthcoming memoir, Endurance, available October 17, Kelly shares how his time in space informed his first year back on Earth.

Ancient Chinese Civilization 1 click Chinese Historical Accounts the Forbidden City, the home of the Chinese emperors until the last dynasty was overthrown in the 20th century Chinese history, until the twentieth century, was written mostly by members of the ruling scholar-official class and was meant to provide the ruler with precedents to guide or justify his policies. How Fentanyl Ingredients From China End Up in the U.S. Ye Chuan Fa was right at his own cubicle, also wearing a thick coat. As the Amys introduced him, he stood up and stuck out his hand. He didn’t speak any English, but smiled and offered a chair and his business card, which had his information in Chinese characters on one side and in English on the other. Carnegie Council for Ethics in International Affairs Speaker: Ward Wilson, Monterey Institute of International Studies Transcript: Nuclear weapons shocked Japan into surrendering at the end of World War II—except they didn’t.

The 1930s were humanity's darkest, bloodiest hour. Are you paying attention? Even to mention the 1930s is to evoke the period when human civilisation entered its darkest, bloodiest chapter. No case needs to be argued; just to name the decade is enough. It is a byword for mass poverty, violent extremism and the gathering storm of world war. “The 1930s” is not so much a label for a period of time than it is rhetorical shorthand – a two-word warning from history. Witness the impact of an otherwise boilerplate broadcast by the Prince of Wales last December that made headlines: “Prince Charles warns of return to the ‘dark days of the 1930s’ in Thought for the Day message.”

China: Surviving the Camps by Zha Jianying By now, it has been nearly forty years since the Cultural Revolution officially ended, yet in China, considering the magnitude and significance of the event, it has remained a poorly examined, under-documented subject. Official archives are off-limits. Serious books on the period, whether comprehensive histories, in-depth analyses, or detailed personal memoirs, are remarkably few. Ji Xianlin’s The Cowshed: Memories of the Chinese Cultural Revolution, which has just been released in English for the first time, is something of an anomaly. Brian Fallow: Time to end the tax experiment, to ease property pressure? New Zealand's tax system is exceptionally distortionary with respect to housing - but the way to correct that is not to tax housing more harshly, but retirement saving more lightly. That is the thesis advanced by Otago University economist Andrew Coleman in a recent paper, Housing, the 'Great Income Tax Experiment' and the intergenerational consequences of the lease. He argues that there is nothing unusual about the way New Zealand taxes owner-occupied housing. People buy, or pay off, their homes out of after-tax income but neither the imputed (avoided) rents they gain nor the capital gain upon sale are taxed. In the jargon, it is TEE - for taxed-exempt-exempt. But that is in stark contrast to the way the government has taxed retirement saving since 1989.