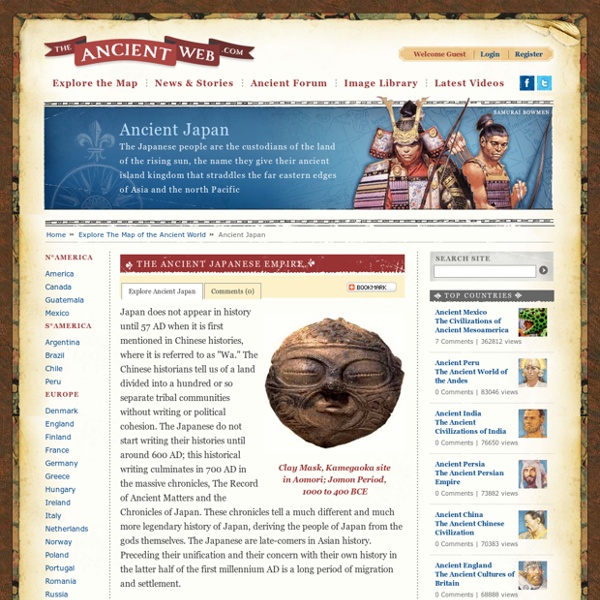 The Geisha, the traditional Japanese ideal of beauty Where did the Japanese come from? Why did they settle the islands? What did life look like before history was written down? In order to get a handle on ancient Japanese history, it helps to consider that it is driven by outside influences. Jomon Culture in Japan The Jomon people were some of the earliest people to establish villages in Japan Although the Japanese do not settle Japan until the third century B.C., humans had lived in Japan from about 30,000 B.C.. Then around 10,000 B.C., these original inhabitants developed a unique culture which lasted for several thousand years: the Jomon culture. We divide the Jomon into six separate eras—ten thousand years, after all, is a long time and even preliterate cultures change dramatically over time. The Kofun Cuirass, a well preserved example of early Japanese armor The Incipient Jomon, which is dated from about 10,500 B.C. to 8,000 B.C. has left us only pottery fragments. The Ainu Related:  Ancient cultures

Early History and Culture One of the most recognizable remnants of Japan's so-called "Tomb period" is the tomb of Emperor Nintoku, who is said to have reigned during the 4th century. With all the technological innovations coming from modern Japan, it's easy to forget that even they had a Stone Age. From around the middle of the 11th century B.C.E. to 300 B.C.E., Japan was populated by a Neolithic civilization called the Jômon (rope pattern) culture. This group of hunters and gatherers decorated their pottery by twisting rope around the wet clay, to produce a distinctive pattern. Remnants of their pit-dwellings and enormous mounds of discarded shells mark the locations of their settlements, which were scattered throughout the islands. But it wasn't until the Yayoi period (300 B.C.E. to 250 C.E.) that Japan became a rice-loving culture. The entrance gate to a Shinto shrine is called a torii. The Tomb period (250 C.E.-552 C.E.) gets its name from the massive tombs that dot the landscape to this day. The Land of Wa

Japan's Mysterious Pyramids Japanese Feudalism and European Feudalism Although Japan and Europe did not have any direct contact with one another during the medieval and early modern periods, they independently developed very similar socio-political systems. Often, these systems are labeled as feudal. What is feudalism? In other words, there are peasants who are tied to the farm land and work for protection plus a portion of the harvest, rather than for money. Similarities between Japanese and European Feudalism Feudal Japanese and European societies were built on a system of hereditary classes. In both feudal Japan and Europe, constant warfare made warriors the most important class. Both knights and samurai rode horses into battle, used swords, and wore armor. Feudal lords in Europe built stone castles to protect themselves and their vassals in case of attack. Differences between Japanese and European Feudalism Japanese feudalism was based on the ideas of the Chinese philosopher Kong Qiu or Confucius (551-479 BCE).

Japan - Ancient Cultures On the basis of archaeological finds, it has been postulated that hominid activity in Japan may date as early as 200,000 B.C., when the islands were connected to the Asian mainland. Although some scholars doubt this early date for habitation, most agree that by around 40,000 B.C. glaciation had reconnected the islands with the mainland. Based on archaeological evidence, they also agree that by between 35,000 and 30,000 B.C. Homo sapiens had migrated to the islands from eastern and southeastern Asia and had well-established patterns of hunting and gathering and stone toolmaking . Stone tools, inhabitation sites, and human fossils from this period have been found throughout all the islands of Japan. More stable living patterns gave rise by around 10,000 B.C. to a Neolithic or, as some scholars argue, Mesolithic culture. By the late Jomon period, a dramatic shift had taken place according to archaeological studies.

Ancient Japan By Tim Lambert The First Japanese Human beings have lived in Japan for at least 30,000 years. About 8,000 BC the ancient Japanese learned to make pottery. Between 300 BC and 300 AD a new era began in Japan. This period is called Yayoi. The Kofun Period in Japan The Yayoi period was followed by the Kofun (from 300 AD to 710 AD). According to tradition in 552 AD the king of Paekche in Korea sent priests to convert Japan to Buddhism. Furthermore in the 7th century AD the emperor became more powerful. Shotoku also built the Horyuji Buddhist temple and monastery in 607. After him, in 646, a series of reforms were made known as the Taika. At that time the capital of Japan was moved when an emperor died as people believed it was unlucky to stay in the same place afterwards. However in the 8th century Buddhist monks and priests began to interfere in politics. The Heian Period in Japan The era from 794 to 1185 is called the Heian period. Moreover outside Kyoto the emperor's power grew weaker. Home

The Ancient Japanese Jomon Period: 10,000 B.C. – 400 BC Stable living patterns began to appear in Japan with the arrival of the Jomon people around 10,000 B.C. People during this period began to make open-pit fired clay vessels and decorated them with patterns made by pressing wet clay with unbraided or braided sticks and plaited cord. The pottery techniques of the Jomon were very advanced and characteristic of Neolithic cultures although the Jomon were a Mesolithic, Middle Stone Age, people. The period is named after their pottery methods as the word Jomon means "patterns of plaited cord". The pottery found during this period suggest the Jomon people led a sedentary or at least semi-sedentary lifestyle as pottery is easily breakable and not much use to hunter gatherers who are always on the move. The Jomon period is typically divided into six different eras; the Incipient, Initial, Early, Middle, Late, and Final periods. Photos of Jomon period artifacts Yayoi Period: 400 BC – AD 250 Nara Period: 710 – 794

Indonesia - History and Culture Indonesia Indonesia Homepage | Adventure Travel in Indonesia Asia Homepage | The World History & Culture As early as the seventh century, powerful Buddhist and Hindu empires challenged each other for supremacy in Indonesia: the Buddhist Srivijaya were centered in Sumatra, while the Hindu Mataram located their capital on Java. The rich architectural and cultural legacy that remains from that time forms the basis for Indonesia's national identity. The sixteenth century marked the arrival of the Portuguese, the first Europeans in Indonesia. Turmoil characterized the first decade of Indonesian independence, until in 1957 Sukarno unified power in his own person. Indonesia's varied past has produced a remarkable array of vibrant cultures,making it one of the world's most diverse and fascinating travel destinations. Although primarily a Muslim nation, Indonesia is marked by wide religious tolerance.