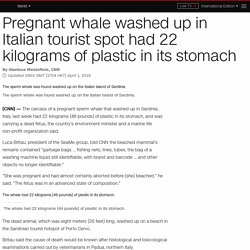 " "She was pregnant and had almost certainly aborted before (she) beached," he said. "The fetus was in an advanced state of composition. " The dead animal, which was eight meters (26 feet) long, washed up on a beach in the Sardinian tourist hotspot of Porto Cervo. Bittau said the cause of death would be known after histological and toxicological examinations carried out by veterinarians in Padua, northern Italy. Sergio Costa, Italy's environment minister, said in a Facebook post: "Are there still people who say these are not important problems?

"We've used the 'comfort' of disposable objects in a lighthearted way in the past years and now we are paying the consequences. Whales Forever - A Study Of Whales. Types of Toothed Whales. There are currently 86 recognized species of whales, dolphins and porpoises. 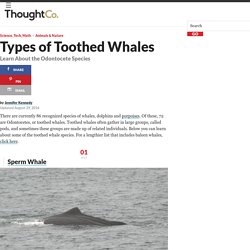 Of these, 72 are Odontocetes, or toothed whales. Toothed whales often gather in large groups, called pods, and sometimes these groups are made up of related individuals. Below you can learn about some of the toothed whale species. For a lengthier list that includes baleen whales, click here. Sperm whales (Physeter macrocephalus) are the largest toothed whale species. Risso's Dolphin Risso's dolphins are a medium-sized toothed whale that have stout bodies and a tall, falcate dorsal fin.

The pygmy sperm whale (Kogia breviceps) is fairly small - adults can grow up to about 10 feet in length and 900 pounds in weight. Orcas, or killer whales (Orcinus orca) may also be known as "Shamu" due to their popularity as an attraction at marine parks like SeaWorld. Short-finned pilot whales are found in deep, tropical and subtropical waters around the world. Long-Finned Pilot Whale Bottlenose Dolphin Harbor Porpoise. Porpoise Species. Mysticeti Definition and Facts.

Mysticeti refers to the baleen whales - whales that have a filtering system made up of baleen plates hanging from their upper jaw. 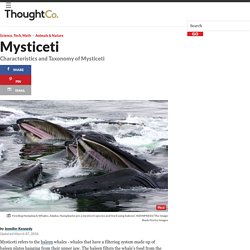 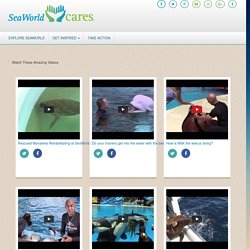 How is Mitik the walrus doing? What’s it like to be a dolphin trainer? How is Amaya the killer whale calf doing? Why does SeaWorld attach trackers to some rehabilitated sea lions? Cetacean Facts & Information. How many species of whale and dolphin are there? 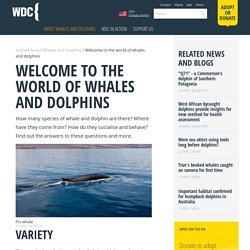 Where have they come from? How do they socialise and behave? Find out the answers to these questions and more. Variety. All about Whale and Dolphin Conservation. Whale Facts: 31 Facts about Whales. About Factslides a high traffic content website (over 1 million visits / month) that takes relevant and complex information from NGOs, think tanks, journals, specialized magazines and media and converts it into colorful and animated slideshows that are easy and fun to read, making the information accessible to students, teachers and curious minds for fun, research, lesson planning, and homework. 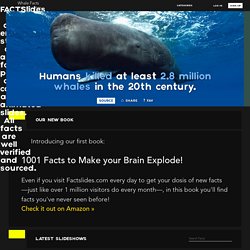 Factslides is dedicated to provide well-sourced and verified information that will help young people access the information and critical thinking skills they need to make our world a better place. Launched in July, 2013, it has shown its facts over 1000 million times, and was selected among the Top 100 websites of 2013 by the prestigious PC Magazine, and as one of the 99 Sites That Every Professional Should Know About by BusinessInsider.

Whales - What is a Whale?- EnchantedLearning.com. SIZE TWO TYPES OF CETACEANS Cetaceans include the whales, dolphins and porpoises. 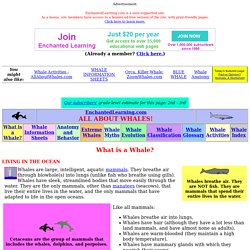 There are over 75 species of Cetaceans. Whales belong to the order Cetacea (from the Greek word "ketos" which means whale), which is divided into the following groups: SWIMMING AND OTHER WATER ACTIVITIES Breaching: Many whales are very acrobatic, even breaching (jumping) high out of the water and then slapping the water as they come back down. Sometimes they twirl around while breaching. Breaching may be purely for play or may be used to loosen skin parasites or have some social meaning. Spyhopping: This is another cetacean activity in which the whale pokes its head out of the water and turns around, perhaps to take a look around.

Lobtailing: Some whales stick their tail out of the water into the air, swing it around, and then slap it on the water's surface; this is called lobtailing. Logging: Logging is when a whale lies still at the surface of the water, resting, with its tail hanging down. Advertisement. Whale Facts and Information. Facts About Whales - WDC Kidzone. Baleen whale anatomy Watch video footage of some amazing whale species Biggest whale The blue whale is the largest animal ever to have lived on Earth; it is larger than any of the giant dinosaurs were. 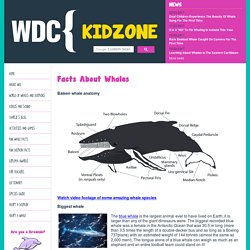 The biggest recorded blue whale was a female in the Antarctic Ocean that was 30.5 m long (more than 3.5 times the length of a double-decker bus and as long as a Boeing 737plane) with an estimated weight of 144 tonnes (almost the same as 2,000 men!). The tongue alone of a blue whale can weigh as much as an elephant and an entire football team could stand on it! The heart of a blue whale is about the size of a VW Beetle car and weighs up to 1000 pounds – that’s about as much as 1,111 cans of baked beans! BabiesBlue whales are pregnant for 10-12 months. Deepest divers A Cuvier's beaked whale has been recorded to dive to a depth of 3km for over 2 hours. Delfinekko.