Freedom of Expression in Online and Social Media

The Grim Consequences of a Misleading Study on Disinformation. Social Media Censorship Sows the Wind, and We All Reap the Whirlwind. My first encounter with social media fact-checking was over a year ago, when Facebook appended a “false information” tag to a meme I had posted about World War II, of all things. 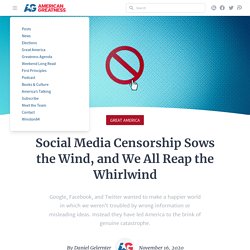 An article by PolitiFact, to which Facebook directed everyone who saw this meme, informed us that careful research had proved that gun control did not, in fact, help advance the Holocaust, and so it was not fair to use the Holocaust as an argument against gun control in America. One problem with this article is the touchingly naïve idea that a complex question, over which historians continue to argue, could be stamped true or false as though it were a fact you’d simply been too lazy to look up. A second problem is that this fact-checking article is full of factual errors.

But that’s not surprising when such articles are generally written by a twentysomething journalism school graduate who became an “expert” in World War II that afternoon after her supervisor told her to research a meme on the Internet. Why the Left Is Outraged Over Carlson’s COVID-19 Vaccine Monologue. Google has controlled the access to information : conspiracy. Censorship is Weapon #1: Trump orders online Tech Giants to stop.

Censorship trumps everything else. 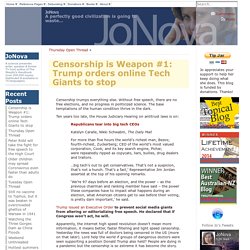 Without free speech, there are no free elections, and no progress in politicized science. The base temptations of the human condition thrive in the dark. Ten years too late, the House Judiciary Hearing on antitrust laws is on: Republicans tear into big tech CEOs. Is Private Internet Censorship Unconstitutional? It is common to hear social media figures and pundits deride censorship on social media and other technology platforms. 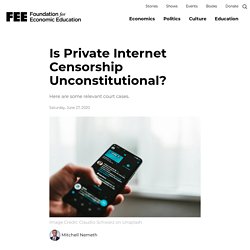 As I wrote in Towards Data Science, this threat is very real, especially during the COVID-19 public health crisis. However, the exaggeration of the threat plays into our society’s growing fondness for “grievance culture.” Social Media's Plantation of the Mind. May 28, 2020. 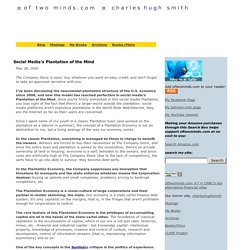 The Platform Designed to Sidestep Corporate Censorship. EU Considering Requiring a Broadcaster License to have YouTube Channel. Google likely shifted undecided voters in 2018 election, researcher says. Example of Media Bias: By Peter Svab, March 25, 2019, Epoch Times: Google may have skewed the results of the 2018 midterm elections by millions of votes, according to research by psychologist Robert Epstein. 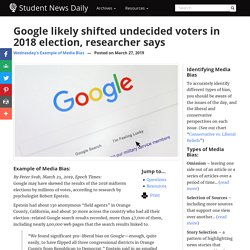 Epstein had about 130 anonymous “field agents” in Orange County, California, and about 30 more across the country who had all their election-related Google search results recorded, more than 47,000 of them, including nearly 400,000 web pages that the search results linked to. Is Google Even-Handed? Is The Bear Catholic? Here is a story of three simple searches. 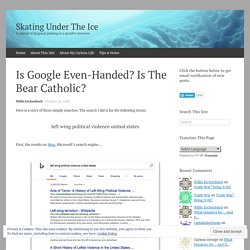 The search I did is for the following terms: First, the results on Bing, Microsoft’s search engine … All but one have “left wing” or “left” in the headline. Next, the same search on DuckDuckGo, the privacy-oriented search engine … GOOGLE: “Big Brother Knows Best” GOOGLE and the ‘adjustment’ of inconvenient viewpoints, especially climate. Guest Opinion by Kip Hansen Disclaimer: The opinions expressed in this article are solely those of the author, Kip Hansen, and do not reflect the opinions of WUWT or Anthony Watts, owner and editor of this blog. 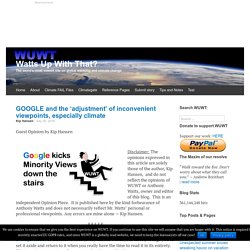 This is an independent Opinion Piece. It is published here by the kind forbearance of Anthony Watts and does not necessarily reflect Mr. Watts’ personal or professional viewpoints. Any errors are mine alone — Kip Hansen. Long Item Warning: This piece is 3600 words long and is estimated to take the average reader 18 minutes to read (every minute worth your effort). An odd thing happened when I wrote two recent essays regarding changes that Google has made to its web indexing/search algorithm. Opinion: Mark Zuckerberg doesn’t care about Holocaust denial. In 2020, all that is required for hatred to seep into our communities is a laptop and internet hookup. 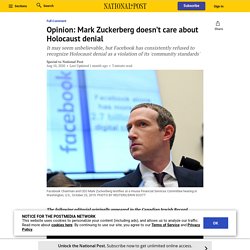 Consider numbers that would make legacy media hyperventilate: worldwide, there are over 2.7 billion monthly active users of Facebook, and 1.8 billion people on average log onto the site every day — a 12 per cent increase over just a year ago. Facebook Flags, Censors NPR Report on Inflated Government School Shooting Statistics. Earlier this week, NPR reported on the high number of school shootings alleged by the U.S. 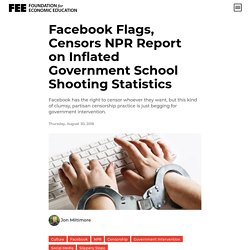 Department of Education. The 240 school shootings detailed in the department’s report on the 2015-2016 school year was significantly higher than other estimates. So NPR, with the assistance of the non-profit group Child Trends, began doing what good journalists do: they collected data. My colleague shared NPR’s article with a few thousand Facebook friends and followers on Tuesday.

How I Became a Casualty in the Facebook-Twitter Social Media Purges. Why Facebook's Long Reign May Be Coming to an End. Conservatives face a tough fight as Big Tech's censorship expands. Geologist Accuses Apple of Political Bias in Removing App Countering Climate Alarmism. How Filter Bubbles Distort Reality: Everything You Need to Know.