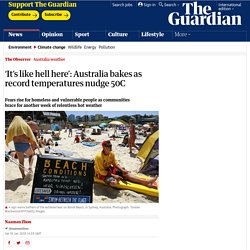 Climate change: Where we are in seven charts and what you can do to help. Image copyright Getty Images The UN has warned that the goal of limiting global warming to "well below 2C above pre-industrial levels" is in danger because major economies, including the US and the EU, are falling short of their pledges. 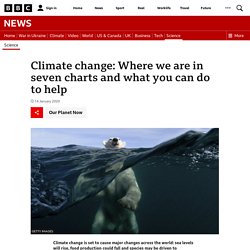 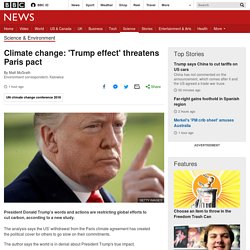 'Our leaders are like children,' school strike founder tells climate summit. Action to fight global warming is coming whether world leaders like it or not, school student Greta Thunberg has told the UN climate change summit, accusing them of behaving like irresponsible children. 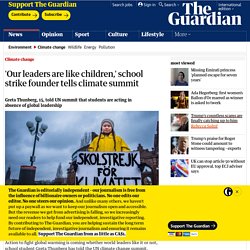 Thunberg began a solo climate protest by striking from school in Sweden in August. But more than 20,000 students around the world have now joined her. The school strikes have spread to at least 270 towns and cities in countries across the world, including Australia, the United Kingdom, Belgium, the US and Japan. “For 25 years countless people have come to the UN climate conferences begging our world leaders to stop emissions and clearly that has not worked as emissions are continuing to rise. Trump confuses climate change with weather, prompting widespread despair.

Donald Trump has once again confused the weather with climate change after suggesting chilly weather headed towards the US means global warming is not real.

I think that he is a businessman and only thinks about financial gain from deforestation etc he likely knows that these governmental scientists are right and that he should stop but by acting oblivious he’s getting away with making money off our highly fragile environment! – eveplant1

“Brutal and Extended Cold Blast could shatter ALL RECORDS - Whatever happened to Global Warming?” 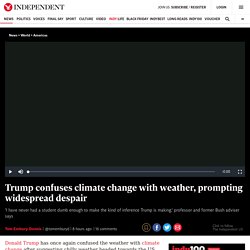 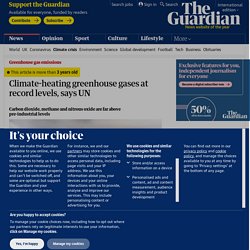 Carbon dioxide, methane and nitrous oxide are now far above pre-industrial levels, with no sign of a reversal of the upward trend, a World Meteorological Organization report says. “The last time the Earth experienced a comparable concentration of CO2 was 3-5m years ago, when the temperature was 2-3C warmer and sea level was 10-20 metres higher than now,” said the WMO secretary general, Petteri Taalas. “The science is clear. Without rapid cuts in CO2 and other greenhouse gases, climate change will have increasingly destructive and irreversible impacts on life on Earth. Vanuatu says it may sue fossil fuel companies and other countries over climate change. The Republic of Vanuatu says it will explore whether it can take legal action against fossil fuel companies and countries for their role in causing climate change. 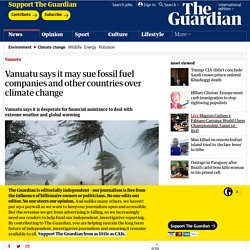 The Pacific nation says it is growing desperate for financial assistance to deal with the loss and damage it is increasingly experiencing due to extreme weather and global warming. National Trust has £30m fossil fuel fund. The National Trust has invested tens of millions of pounds in oil, gas and mining firms – despite the conservation charity pledging to cut down its own use of fossil fuels and warning about the impact of climate change. 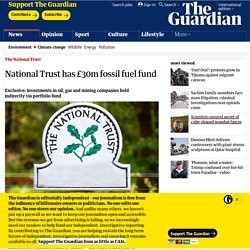 An investigation by the Guardian has found that the trust – which aims to “nurse the environment back to health” – has more than £30m of investments in oil, gas and mining companies, including BP and Shell, held indirectly via a portfolio fund. The trust has vowed to decrease its own use of fossil fuels across its estates in England, Wales and Northern Ireland in response to climate change, aiming to generate 50% of its energy from renewable sources by 2020. G20 nations still led by fossil fuel industry, climate report finds. Climate action is way off course in all but one of the world’s 20 biggest economies, according to a report that shows politicians are paying more heed to the fossil fuel industry than to advice from scientists. Among the G20 nations 15 reported a rise in emissions last year, according to the most comprehensive stock-take to date of progress towards the goals of the Paris climate agreement.

The paper, by the global partnership Climate Transparency, found 82% of energy in these countries still being provided by coal, oil and gas, a factor which has relied on an increase of about 50% in subsidies over the past 10 years to compete with increasingly cheap wind, solar and other renewable energy sources. Jerry Brown: Climate change driving Camp Fire, CA wildfires. Gov. 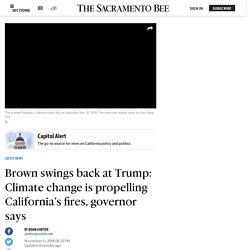 Jerry Brown on Sunday said wildfires like the ones spanning the state today threaten “our whole way of life” and lend urgency to efforts that would slow the impacts of man-made climate change. “This is not the new normal,” he said, employing a phrase that state leaders have used to describe the past two deadly, prolonged California fire seasons. “This is the new abnormal, and this new abnormal will continue certainly in the next 10 to 15 years.” He spoke a day after President Donald Trump wrote a message on Twitter that seemed to blame California government for the 2017 and 2018 wildfires that wiped out parts of Santa Rosa, Redding and now Paradise. “There is no reason for these massive, deadly and costly forest fires in California except that forest management is so poor,” Trump wrote. 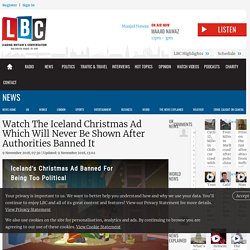